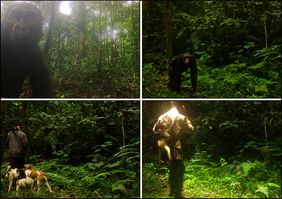 Equatorial Guinea's forests maintain some of the highest levels of biodiversity in Central Africa (Sunderland 2005). Despite its small size, the country is particularly important for primate diversity, with more than 16 species reported, including the western lowland gorilla (Gorilla gorilla gorilla) and central chimpanzee (Pan troglodytes troglodytes). This region is identified as a priority site by the Central Africa Regional Program for the Environment (CARPE 2005) and is highlighted as one of the most important areas for conservation in sub-Saharan Africa (Sunderland 2005; Murai et al. 2013; Strindberg et al. 2018). In 2014, the IUCN's Regional Action Plan for the Conservation of Western Lowland Gorillas and Central Chimpanzees identified the Monte Alén-Monts de Cristal-Abanga landscape between Equatorial Guinea and Gabon as a priority region, considered to be of 'exceptional' conservation importance for great apes (IUCN 2014).

Bristol Zoological Society (BZS) has been engaged in great ape conservation in Central Africa since 2003. Our efforts were initially focused in Cameroon, supporting a primate sanctuary and a community-based conservation project. In the UK, we are participating in the European Endangered Species Programme for the western lowland gorilla with our breeding group at Bristol Zoo Gardens. However, as underscored by the 2014 IUCN Action Plan, there is urgent need for additional in-situ conservation efforts in those priority regions that are currently receiving little attention. As such, in 2019, BZS initiated a research, monitoring and conservation programme in Equatorial Guinea's Monte Alén National Park (MANP).

Despite established environmental laws and policies, Equatorial Guinea has virtually no on-the-ground law enforcement in protected areas (Cronin et al. 2017). As such, current protected areas, including MANP, have been found to have no effect on the distribution of gorillas and other large mammals (Murai et al. 2013). Today, a large number of people are unemployed and rely on hunting as a source of income. As much of Equatorial Guinea's economy is based on oil revenue, the current coronavirus pandemic and subsequent depression of crude oil prices is likely to result in a further severe economic downturn for the country. Placed in the centre of this economic uncertainty, MANP could see an intensification of hunting within its borders. This, coupled with the estimate of only 2,000 gorillas remaining as of 2013 (Murai et al. 2013), is why we have chosen to focus our conservation efforts here.

Our initial goal was to establish a standardised, long-term monitoring programme that will produce accurate baseline information on population densities and distribution, and allow us to detect changes in those variables over time. This programme utilizes multiple techniques to enhance our detection rate for rare or cryptic species, including camera trapping, bioacoustics, transect and recce surveys, and invertebrate DNA. A central component of this effort is to build technical expertise among our partners in the Equatoguinean Institute for Forestry Development and Protected Area Management (INDEFOR-AP). Once established, INDEFOR hopes to adopt our programme as their long-term monitoring protocol.

Our preliminary efforts focused on establishing a network of camera traps across MANP. The first cameras (n = 6) were deployed in 2019 as a pilot study across a range of habitats covering approximately 30 km². Cameras were active for an average of 114 days and produced over 8,000 images, which included forest elephants (Loxodonta cyclotis), leopards (Panthera pardus), giant pangolin (Smutsia gigantean), mandrills (Mandrillus sphinx), black colobus (Colobus satanas), moustached guenon (Cercopithecus cephus), red river hog (Potamochoerus porcus), and various species of duiker (Cephalophus spp.). Chimpanzees were detected on 4 cameras, including one less than 2 km from a central point of entry for hunters into the park. Two cameras confirmed the presence of western lowland gorillas, including a juvenile (approximately 4 years old), indicating the MANP population continues to reproduce. These cameras were among those positioned furthest into the interior of the park, suggesting gorillas may be isolated within regions that are less accessible for hunters. While their presence is a positive sign, we only recorded gorillas twice in 4 months, potentially suggesting a substantial retraction of their historic range within MANP. Our on-going programme will now be critical to better understand their current distribution.

Of greatest concern are the frequent signs of hunting within critical habitat for gorillas and chimpanzees. Hunting activity was detected 184 times during the pilot study, the majority of which occurred within 5 km of roads and villages. As expected, hunting was negatively related to species diversity, as cameras placed farthest from roads/villages captured the greatest number of species.

As of August 2019, we expanded our camera trap network (n = 20) and captured a variety of additional biodiversity and threats. In addition to images showing prolific hunting activity, survey teams recorded a high density of snares and shotgun shells along most major trails. While snares and shotgun hunting can be devastating, their impact is typically limited to the areas adjacent to major trails where hunters have greatest access. A more urgent issue revealed by our camera traps is the use of dogs. Images reveal hunters with large packs of dogs, at times more than 5 dogs per hunter. Aside from the increased range and efficacy of hunting with dogs, there is also the potential for zoonotic disease transfer between dogs and wildlife (Ellwanger et al. 2019). This is of major concern as it is a previously undocumented threat to these wildlife populations.

Despite an abbreviated field season in 2020 due to the pandemic, our monitoring programme has already revealed critical information about wildlife presence and hunting trends within MANP. Our plans are to expand the camera trap network across MANP, with 30+ cameras anticipated in 2020-2021. Once fully deployed, this monitoring programme will be complemented by a boots-on-the-ground approach, including surveys and enforcement patrols via our INDEFOR counterparts. The BZS western lowland gorilla conservation project remains the only significant effort to reduce the pressures on wildlife in this region of Equatorial Guinea. Thus, its continuance post-pandemic remains our top priority, particularly as our preliminary data underscores the urgent need for expanding monitoring to enable rapid, actionable information to inform targeted enforcement activities in the future.