1,063 Mountain Gorillas - What Does this Number Mean? 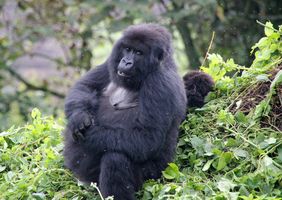 My entire childhood was spent in the south of France, on a hill between an evergreen oak forest and the garrigue. Our family had a lot of cats, who would always generously leave dead mice and spiders on our doorstep. Over time, our cats were joined by more and more cats from the wild. These feral cats would not allow us to come close to them, but they loved the food we used to leave on the windowsill. This obscure number of feral cats ended up eating the food that we had intended for "our" cats.

How many cats were there exactly? We could, of course, count our beloved pet cats: there were six of those. We were also able to distinguish a further seven cats. We knew that there were probably more of them, but they were never all there at the same time. As the feral cats were afraid of us, they mostly only ever came by at night. Eventually, we estimated there were probably about 20 cats in total: our six, the other seven we could readily identify, and the "others" that we only ever glimpsed.

That was my first experience with the difficulty of animal counting. If it is already so difficult with 20 cats - who all have a common source of feed - how difficult must it be with wild mountain gorillas? They live in dense forests, are shy creatures and an encounter with them can end up being life-threatening for both humans and gorillas.

Mountain gorillas (Gorilla beringei beringei) live only in two forest islands, the Bwindi-Sarambwe Forest in Uganda and the Democratic Republic of the Congo (DRC), and the Virunga area on the borders of Uganda, Rwanda and the DRC. On December 16, 2019, the IGCP announced that there were 1,063 mountain gorillas in the wild. But how did researchers come up with such an exact number? The short answer: they don't really know for certain how many mountain gorillas there are. However, just like with "20 cats", this number is much easier to communicate than the statistics that lay behind it.

Since Dian Fossey began her work in Rwanda in the 1970s, mountain gorillas have been intensively researched and protected. About half of all gorilla groups are now "habituated" and the animals are no longer afraid of humans. This allows researchers (and tourists) to observe and name the gorillas and to register new births. Just like our cats back home, these gorillas are easy to count.

There are, of course, other groups of mountain gorillas, which are mainly found in Uganda and the DRC. These gorillas are mostly unknown to us. We don't actually want to encounter them, as this is the only way to ensure their protection. However, to be able to assess whether their areas are well protected, we need to have an idea of their number. Is it possible then to count animals without seeing them? Yes, indirectly. Like detectives looking for fingerprints at a crime scene, we can follow the tracks of the gorillas and collect their DNA. This is done by gathering the gorillas' faeces, which always contain a few cells with their DNA.

This DNA is extremely valuable, as we can use it to uniquely identify each individual - just like with humans. In autumn 2015 and spring 2016, we walked through the entire Virunga area and collected and analysed over 1,000 faecal samples. In addition to the 418 well-known habituated gorillas, we "found" (genetically identified) about 130 individuals who did not live in habituated groups. Thanks to DNA fingerprinting, we were able to identify which gorilla was found and where. We were, therefore, able to ascertain that we had missed at least 50 animals in the autumn and spring surveys.

Various statistical methods are available to help us estimate this, however, they can end up giving differing results. According to one such model, there were 221 non-habituated gorillas in the Virunga area, but maybe only 204, or possibly as many as 243. The second model reported 251 gorillas, but also possibly up to 340. The actual number could, therefore, be anywhere between 200 and 340.

The published total of 1,063 mountain gorillas is a combination of multiple data sets: 186 non-habituated gorillas have been genetically identified in the Virunga area; in Bwindi there were 263 non-habituated individuals in 2018. In addition, we registered exactly 418 habituated gorillas in the Virunga area and 196 in Bwindi. 1,063 is, therefore, the bare minimum and excludes those gorillas that we have overlooked but are statistically highly likely to exist.

If we had recorded our cats this way, then we would have ended up with our six pet cats plus seven more, so 13 in total. This would have, however, ignored those cats that we could not exactly identify. It is similar with the number 1,063 - most likely it does not reflect the actual number of mountain gorillas, but rather the absolute minimum. Nevertheless, from a conservation standpoint it is important to remember that in contrast to the other great ape species, the number of individual mountain gorillas is increasing. And that is a huge success.