20th Anniversary of the BRD 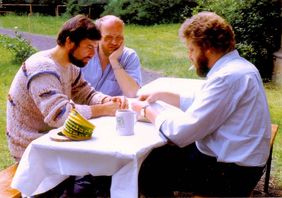 A meeting of the board of directors in 1984: Manfred Hartwig, Rolf Brunner and Paul-Hermann Bürgel.

In 1983, Paul-Hermann Bürgel, a great animal lover, spent his holidays on one of his world trips. This time he crossed Africa from north to south. He met a colleague of Dian Fossey's in Rwanda who told him about the problems of gorilla conservation. At that time, the survival of the mountain gorillas had not yet been ensured and only a few organizations were working on behalf of these animals. P.-H. Bürgel promised to help once he was back in Germany.

Then, however, he encountered problems. Bernhard Grzimek, the director of the Frankfurt Zoological Society, was willing to listen to him, but then told him about all the projects that his organization was already running. He did not commit himself to anything: "We'll have to see," he said. That is when P.-H. Bürgel decided to become actively involved himself. He was an opponent of typical "societies" and only wanted to form an action group. But when it turned out to be impossible to generate support in Germany - financial or otherwise - for an action group, he found that he had to establish a society after all.

P.-H. Bürgel talked to his friends, they talked to their friends, and so on. Finally, seven people met in Voerde, a small town on the Lower Rhine, in Hartmut Golomb's sitting room on June 2, 1984. For lunch we had curried sausages and French fries, beer and wine. This was the meeting where the Berggorilla Patenschaft ("mountain gorilla sponsorship society") was founded by Paul-Hermann Bürgel, Manfred Hartwig, Rolf Brunner, Hartmut Golomb, Gabriela Ernst, Adelheid Kuningas and Claudia Wallraven.

The society's headquarters were to be located in the castle in Burgpreppach in Upper Franconia, where P.-H. Bürgel lived, and he was elected chairman. We started to make our way through the obligatory paperwork: we had to see a notary, open bank accounts, etc.
WWF Belgium was well represented in Rwanda and we made contact with the Mountain Gorilla Project/Projet Gorille de Montagne. We also established first contacts with GTZ who had already started to work in the Kahuzi-Biega National Park.

Targeting Germany, we promoted the conservation of the mountain gorillas and tried to spread information about these animals and the threats facing them. The film Gorillas in the Mist helped, of course. We collected donations, bought the first used equipment from army surplus stores and transported the equipment to WWF in Brussels ourselves. It was still a very small-scale operation.

After P.-H. Bürgel had withdrawn from the society, the headquarters were moved to Mülheim and the name was changed to Berggorilla & Regenwald Direkthilfe (Mountain Gorilla and Rainforest Direct Aid). The change in name was necessary because of the international scope of the society's work: "Patenschaft" does not translate easily into English or French. Apart from that, the name is intended to indicate that gorilla conservation is impossible without the conservation of the gorillas' habitat and that the society wants to help directly without the handicap of a large administrative apparatus.