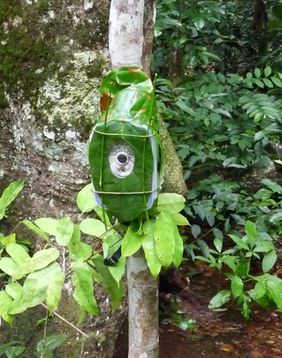 Accurate population assessments of endangered species are of great importance for determining conservation priorities and measuring the success of implemented management strategies, but monitoring elusive species in dense forest habitat is a challenge for researchers. Past approaches to population assessment of elusive species have included line transect and genetic sampling, audio recording and direct observations. However, most of these approaches have some limitations: they are applicable only to a certain group of species or a specific question, are unable to monitor movements of individuals or rely on indirect signs, all of which increases estimation uncertainty.

Remote camera traps are rapidly gaining popularity among researchers and conservationists as a valuable monitoring tool, because they are reliable, relatively cheap, are not labour intensive, and enable long term spatio-temporal monitoring of specific individuals or populations over many years. To date camera traps have primarily been used to measure species richness or estimate abundance using capture-recapture (C-R) in single species studies. However, increasingly they are being employed to monitor other aspects of ecology and behaviour including activity patterns, feeding ecology and inter-specific competition.

In 2005 we set up a new field site in Loango National Park, Gabon, with the aim of habituating sympatric western gorillas (Gorilla gorilla gorilla) and central chimpanzees (Pan troglodytes troglodytes) in order to answer questions about feeding ecology, interspecies competition, ranging behaviour and social structure. In 2009 we began using remote video camera traps to monitor these and other mammal species within the park. The overall aim of this study was to conduct a multi-species population assessment which could be widely applied across rainforest habitats and, in addition to the chimpanzees and western gorillas, we also included forest elephants (Loxodonta cyclotis) in the study. Specific objectives were to estimate the density and examine the social and demographic structure of these three sympatric species using spatially explicit capture-recapture (SECR) techniques.

From 2009-2010 we set up 45 remote camera traps in a systematic 1 km²grid covering an area of 60 km². Motion detectors in the cameras were programmed to trigger immediately whenever an animal passed by, both during the day and at night time. We checked the cameras every 2 weeks, changing the batteries and the silica gel which kept them dry; and ensuring that no debris were obscuring the lens. Once we had downloaded the video footage from the camera traps onto a computer, we then began identifying the different individuals through a combination of facial and body characteristics including shape and coloration of ears, nose, face and body, in addition to any body scars or disfigurements.

Overall there were 1045, 471, and 2237 individual chimpanzees, gorillas and elephants respectively captured on the remote cameras. Of these, 439 (42%), 103 (22%) and 963 (43%) positive identifications were possible for the three species respectively. Gorillas were more difficult to identify due to their heavy brow ridges which often resulted in their facial features being in shadow, and also because they have less variation in skin and hair colour than chimpanzees. They also have much smaller ears which are less frequently damaged than chimpanzee ears, further restricting the potential for positive identifications. Since all identification was done by one experienced observer, we tested the reliability of the identification method by conducting inter-observer reliability testing with both experienced and inexperienced participants. We estimated the density of the three species within the study area using the maximum likelihood based SECR 2.3.2 package (Efford 2012), which is a very user friendly package.

In addition to knowing how many individuals were present in the study area, we also wanted to learn more about the social structure of the three species, and so we assigned group membership to different individuals using the following criteria. Individuals captured together during the same video trigger or within 15 minutes of other individuals on the same camera were considered to be part of the same group. Furthermore, if chimpanzee A was captured with chimpanzee B, and B with C, then A and C were assumed to share group identity.

The inter-observer testing confirmed the reliability of the individual identification method, even among participants who had no experience in identification of those species. Elephants were the easiest species to reliably identify, but both chimpanzees and gorillas were also accurately identified significantly more than expected by chance. In total there were 123, 52 and 139 unique individual chimpanzees, gorillas and elephants identified from the video camera trap footage. The SECR model estimated that there were 1.72 chimpanzees, 1.37 elephants and 1.2 gorillas per km². While the chimpanzee and elephant estimates showed precision, there was more uncertainty around the gorilla estimate due to the lower identification rate for this species. The SECR also measured the sex ratio of the three species, which was 1 : 2.1, 1 : 2 and 1 : 3.2 for chimpanzees, elephants and gorillas respectively.

In terms of group membership and social structure, 11 chimpanzees were only ever captured alone but the remaining 112 individuals were assigned to 4 different communities containing 45, 32, 13 and 22 individuals. Gorillas were assigned to 8 groups each with a silverback male and multiple females, and there were 8 solitary males and 6 females only captured alone. Thirty two adult female and 36 adult male elephants were captured alone and the remaining individuals were assigned to 21 core groups composed of multiple adult females and their offspring. Temporary fusing of 2 or 3 core groups was observed among females on 4 occasions, and 14 adult males were observed in bachelor groups of 2 or 3 individuals on 18 occasions but were otherwise solitary.

In terms of the home ranges of these different groups, our results fitted well with what is already known about the social structure of these three species. The chimpanzee communities showed some overlap, while there was high overlap between gorilla group home ranges and between female elephant group home ranges. This makes sense given that chimpanzees are known to be territorial while gorillas and elephants are much less so, regularly sharing their home ranges with other groups. Group composition of female elephants also suggested that they exhibited the same flexible group fission-fusion as seen in savannah elephants.

This study showed that the SECR method is an effective tool for estimating the density of chimpanzees and elephants, although the lower identification rate for gorillas resulted in less certainty about their precise density. However, when we cross checked our SECR gorilla abundance estimates with other methods we obtained similar results, and so combining SECR and camera trapping still appears to be a very useful approach for gorillas.

Overall our study showed that using remote camera traps enables researchers to effectively make population assessments across multiple species. The methodology and analysis is straightforward to implement, meaning that wildlife managers could continuously monitor population changes to assess conservation effectiveness. In addition, while it was outside the scope of this particular study,our study does suggest that there is potential for long term monitoring of population dynamics of large mammals living in forested habitats. For example, it would be possible to monitor birth/death rate, reproductive success, inter-birth intervals, activity patterns and age/sex structure of multiple species. Furthermore, in our study we monitored three species from a total of 19 mammal species recorded on camera traps in Loango, but the study could have been expanded to include additional species which were individually identifiable such as leopard (Panthera pardus), sitatunga (Tragelaphus spekii) and forest buffalo (Syncerus caffer nanus). Eventually, the results of this study may help standardize both population assessments across regions and evaluation of conservation effectiveness that environmental managers and decision makers are urgently in need of.