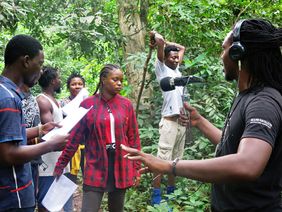 My Gorilla-My Community recording in the forest (© WCS Nigeria)

Hunting, habitat loss and fragmentation are the main threats to the survival of the Cross River gorilla Gorilla gorilla diehli (Bergl 2012; Imong et al. 2014). Although protected by law, gorillas are still occasionally killed by hunters and may be fatally injured by snares set for smaller animals (Dunn et al. 2014). With only approximately 300 individuals remaining, the loss of even a few individuals to hunting represents a serious threat to their long-term survival. Cross River gorilla habitat is increasingly being destroyed and fragmented. Farmers in the region typically clear new portions of forest each year to establish new farms or expand existing ones to increase production. Illegal logging, indiscriminate use of fire in the dry season, and building new roads also threaten gorilla habitat. If continued, deforestation is expected to reduce gorilla habitat, isolate subpopulations, and compromise the long-term viability of the population. With the human population increasing within the landscape occupied by Cross River gorillas, saving this critically endangered gorilla subspecies requires actions that influence positive attitude and behaviour change.

In addition to strengthening law enforcement, the Wildlife Conservation Society (WCS) has been implementing a conservation education program in the Cross River gorilla landscape in Nigeria since 2001. Initially school-based, the program evolved to include the use of conservation films and village meetings to create awareness and strengthen support for Cross River gorilla conservation. Building on this effort, WCS launched the radio program My Gorilla-My Community (MGMC) in 2015 in collaboration with PCI Media Impact, leveraging the power of media and storytelling to inspire positive change in attitudes and behaviour towards Cross River gorillas.

Five seasons of the program, consisting of 26 episodes each, have been produced and broadcast on local radio stations to date, with a target audience of about 100,000 people within and around the Cross River gorilla landscape, and over 500,000 people across the entire Cross River State. A sixth series of the program is currently being produced. MGMC utilizes PCI Media Impact's My Community approach to communications, focusing on developing the capacity of local coalitions to produce public awareness and behaviour change through Social and Behavioural Change (SBCC) campaigns. The methodology is comprised of an entertainment-education component (in this case, the radio drama), an interpersonal communication piece (a "radio magazine" or call-in show), and a series of community engagement activities.

Because the My Community model respects existing and ongoing local research, the program was able to build on information that had already been gathered by WCS over many years. These findings on the Cross River gorilla were then combined with participatory investigative research from meetings and interviews with members of the target audience, including results of a baseline survey of knowledge, attitudes and behaviours. The project team used the identified issues, attitudes, behaviours, and information gaps to develop entertainment media and campaign materials. Based on the formative research, the project team determined the key behaviour changes targeted by the campaign. The program targets negative behaviours such as hunting of endangered species, encroachment on protected areas, unsustainable farming practices, illegal logging, unsustainable extraction of non-timber forest products, and violation of forest and wildlife laws. In place of these, it promotes good forest governance, sustainable agricultural practices, preservation of cultural practices that benefit conservation, support for law enforcement, and community conservation.

A key component of the MGMC program is a Drama series, which is set in a fictional community ("Boda") which represents the geographical range of the Cross River gorilla and attempts to mirror everyday lives of people living within the target communities. Dramas are effective in encouraging the desired changes because they allow for complex and integrated messages to be understood and remembered. The fictional story appeals to emotion and presents information in a less confrontational manner than traditional media, facilitating learning and encouraging audiences to take action. Dramas also help establish social norms by provoking interpersonal communication.

While listening to a serial drama, the audience is allowed time to form bonds with characters whose thinking and behaviour regarding various environmental and conservation issues gradually evolves throughout the storyline in a positive way. Audience members forge emotional ties to Entertainment Education program characters, and these ties influence values and behaviours more forcefully than the purely cognitive information provided in documentaries. Next to peer and parental role models, role models from mass media are of particular importance in shaping cultural attitudes and behaviour. The program also has an interview segment that provides a platform for interaction between conservation experts, political and community leaders, and the audience.

Once broadcast, the program ran in parallel to community action campaigns that support the key messages through events, written materials, speaker-series, school visits, and other local activities. Feedback from listener groups established in target communities plays a crucial role in monitoring the program and determining what is working well and what needs to be improved. A post-broadcast survey of the target communities is planned to evaluate the impact of the program.

Changing Attitudes and Behaviour towards Gorillas and their Habitat

To establish a baseline for future monitoring of the impact of the program, a Knowledge, Attitudes, and Behaviour (KAB) survey was completed in 2014, prior to the MGMC program's inaugural broadcast. The KAB survey will be repeated in 2019. Although a formal evaluation of the impact of our education and behaviour change efforts has not been conducted, there are indications that WCS' education efforts, including the MGMC, are producing positive results. In an informal survey conducted in 2017, over 69 % of respondents stated that as a result of listening to MGMC, they were more inclined to report illegal activities such as hunting of endangered animals to the authorities. Over 60 % reported having engaged in interpersonal communication and encouraging community members to support gorilla conservation.

Communities prevent the killing of a Cross River gorilla outside the Afi Mountain Wildlife Sanctuary: In 2017, a lone male Cross River gorilla was sighted by villagers on the outskirts of two villages more than 10 km outside the Afi Mountain Wildlife Sanctuary (AMWS). Without the protection offered by ranger patrols within the AMWS, this "blackback" gorilla faced serious risk of being killed by the villagers for bushmeat or for the perceived threat to people and crops. Fortunately, rather than killing this young and brave gorilla, the villagers tolerated it. The village chiefs reported its presence to protected area staff and ensured that the gorilla was protected from any attack until it safely returned to the AMWS. Although only anecdotal, the villagers' willingness to protect the gorilla rather than kill it may have been influenced by the awareness created by WCS' long-standing education program.

WCS Nigeria will continue to implement the MGMC and other interventions to secure the long-term survival of the Cross River gorilla.

Funding for My Gorilla-My Community has come from a number of donors, including the US Fish & Wildlife Service, Whitley Fund for Nature, Critical Ecosystem Partnership Fund, Kolmården Fundraising Foundation, and the German Embassy in Nigeria.