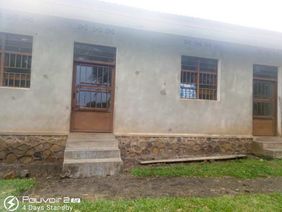 The Sarambwe ranger post was attacked during the evening of 10 October 2020 by a Mai Mai group operating in the vicinity of Sarambwe. A few days before the attack, several neighbouring villages had been attacked and looted, including the village of the Sarambwe head tracker.

During the attack, the post lost an officer of the ranger force and about a third of its belongings (mattresses, chairs, solar panels, lighting, cooking pots etc.). The whole post was riddled with bullets, the walls were damaged and the roofing over the kitchen and the storeroom was destroyed.

ICCN decided to pull back both ICCN staff and the loyal supporting troops for their own safety. The remaining goods were also retrieved and secured elsewhere. The reserve was completely abandoned: no rangers, no military support, no trackers. It was a bonanza for poachers and wood collectors. Information about illegal activities started coming in from all over the reserve.

I talked to the trackers and found that they felt confident and had decided to resume their work - whether the ICCN rangers and supporting soldiers joined them or not. Following this decision, Berggorilla & Regenwald Direkthilfe sprang into action to repair the ranger post to make it habitable again. They replaced all the windowpanes, all the damaged roof sheets and all the missing equipment such as mattresses, chairs, tarpaulins, solar panels, batteries, lighting, voltage stabilisers, lightbulbs, walkie-talkies and kitchenware. Making the post habitable again proved to ICCN and the local population that Berggorilla could be relied upon to support the conservation and the development of the reserve.

Berggorilla & Regenwald Direkthilfe did not stop there. It has also extended its support to the local people who lost their livestock during the attacks on the post and its neighbouring villages, providing the funds to buy 34 goats and ten sheep. This was a very important gesture for the people and for the maintenance of the warning system.

Work of the trackers and the challenges of renewal

After the Sarambwe post was restored, the commander of the Armed Forces of the Democratic Republic of the Congo (FARDC) deployed a squadron of soldiers next to the post to keep it secure. Two trackers live at the post and the other eight live in their own houses nearby. Goods retrieved after the attack have been brought back for the trackers to use.

The trackers carry on as normal, patrolling six days a week, looking after the compound and maintaining three to four trails every month. Since the beginning of this year, they have carried out 77 patrols, prevented the encroachment of the reserve by loggers, stopped the establishment of fields by six Ugandans, and extinguished bush fires in three subsections, thereby preventing their spread.

During the course of their activities, the trackers have been unwavering in their pursuit of offenders, particularly when they encounter them during patrols. They continue to work on their own, without the help of any ICCN representative to interrogate, raise awareness and issue warnings to the wrongdoers. In such cases, the trackers are unsure whether they should release the offenders or take them to the police. The presence of an ICCN representative with legal powers is required but continues to be problematic.

During the last three months, the trackers identified four violations at the border between the reserve and Uganda. They found two fallow fields, one field of coffee plants owned by a Ugandan woman, a fire set to clear an area for cultivation, and one case of poaching.