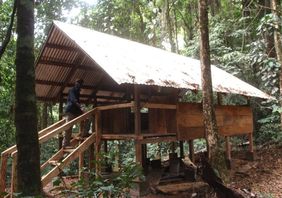 The new sleeping shed at Afi Base Camp (© Inaoyom Imong)

Afi Mountain Wildlife Sanctuary is the most westerly of three sites in Nigeria where Cross River gorillas occur, the other two sites being the Mbe Mountains and Cross River National Park. The sanctuary is managed by the Cross River State Forestry Commission with support from a number of NGOs including the Wildlife Conservation Society (WCS). A dedicated team of rangers carry out regular anti-poaching patrols and collect data used for monitoring of the Afi gorillas. Covering only 100 km², Afi is not large, but it is very rugged with peaks rising to 1,300 m. Rangers need base camps inside the sanctuary from which to launch anti-poaching patrols and to provide effective protection for the 25-30 gorillas which survive here.

The original base camp on Afi (then only a forest reserve) was established in 1996 by Kelley McFarland, who started the first long-term study of Cross River gorillas at Afi. Later on, with support from Fauna and Flora International, this camp was used as a base for protection and monitoring activities by rangers. Growing awareness of the importance of Cross River gorillas encouraged Cross River State Government to create a wildlife sanctuary in 2000 to protect Afi's remaining gorillas.
With funding support from Berggorilla & Regenwald Direkthilfe the original tented camp was rebuilt in 2005, but in recent years the building deteriorated and, in a poor condition, threatened to collapse. ThankfullyBerggorilla & Regenwald Direkthilfe have come to the rescue once again, and with additional funds the camp was completely rebuilt by WCS in 2011. Progress on the renovation work was slow and difficult since all wood and other building materials had to be carried by porters as head loads through the rugged terrain. The newly renovated base camp greatly facilitates gorilla research and protection activities, and now has two, relatively more comfortable, sleeping sheds, which can accommodate more people than previously possible. Improved camping facilities in the sanctuary have also helped raise morale among rangers and other field staff and hopefully will enhance their performance. We are grateful to Berggorilla & Regenwald Direkthilfe for their financial support that made the improvement of camping facilities in the Afi Mountain Wildlife Sanctuary possible.