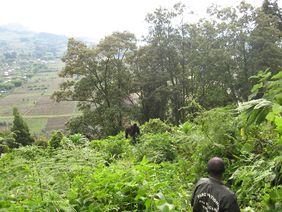 In 2015 to 2016 another gorilla census was conducted in the Virunga Volcanoes - and as the censuses before, the result was very positive again. It found a minimum of 604 individuals in that area, 124 more than during the last census. This means that the number has more than doubled in the past three decades.

In combination with the 400 individuals living in the other mountain gorilla population in Bwindi, these new results push the total number of mountain gorillas to over 1000 - one of the rare success stories in conservation, although wildlife is still extremely endangered in the Democratic Republic of the Congo. Martha Robbins, research scientist and gorilla expert at the Max Planck Institute for Evolutionary Anthropology in Leipzig, Germany states: "This increase exemplifies the dedicated efforts of the governments of Rwanda, Uganda, and the Democratic Republic of the Congo to conserve these critically endangered great apes, and notably, the hard work of park staff on the ground. This dramatic increase also shows that extreme conservation efforts including tourism, veterinary work, and community projects can have a positive impact on one of our closest living relatives."

Conducting the census was a large collaborative effort among the park services of the three countries where mountain gorillas live, several non-governmental conservation organizations, and the Max Planck Institute for Evolutionary Anthropology. The census was a combination of intensive fieldwork and detailed genetic analysis. Field teams walked more than 2,000 km to sweep intensively through 440 km² searching for trails and nest sites left by the gorillas. Genetic analysis, taking more than 18 months to complete, was conducted on approximately 1,100 fecal samples. The current figure represents a 26% increase in the number of gorillas over a 6-year-period, which is a 3.8% annual rate of increase. This increase is due to improved methods used in this recent census as well as actual growth of the population. The 604 gorillas were found in 41 social groups and 14 solitary males.