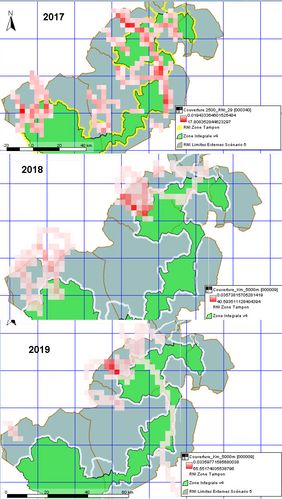 The East African Albertine Rift is known for its extremely high biodiversity and endemism, the highest in continental Africa, and has been the subject of numerous biological and ecological studies. As a result, significant conservation efforts have been made over the last few decades. The Rift extends over six countries, each with its own unique history, political system and capacity to engage in effective conservation.

The success of conservation efforts in parts of this region has recently increased due to effective transborder collaboration between Uganda, Rwanda and the Democratic Republic of the Congo (DRC), with a focus on the conservation of eastern gorillas. Regular cooperation, communication and planning between the natural resource management authorities of the three countries has maximized the conservation potential of the region's various parks with gorillas.

There has long been interest in the biodiversity of the Itombwe Massif in the Albertine Rift, going back to the expeditions of the 1950s by Prigogine, Curry Lindahl and George B. Schaller, as well as the work of Laurent in the early 1960s. These and other missions by Prigogine in the 1970s and 1980s have highlighted the great importance of the Itombwe Massif at the local, national and international level. Schaller demonstrated its significance for gorilla populations (17 important gorilla areas were identified at that time). In 1993, a conservation programme for the Itombwe Massif was prepared. The preparation of this programme, which would be financed by the World Bank and carried out by the IUCN Central Africa Office, started with an environmental and socio-economic survey led by IUCN with a view to planning future interventions. This project enabled the collection of additional and relevant information to be used for the conservation and sustainable use of the biological diversity of these places (Charles Doumenge and Christine Schilter 1997).

In 1996, a systematic great ape survey was conducted by ICCN and WCS. In 2004, WWF carried out an ornithological survey. The Itombwe Nature Reserve, INR, was created in 2006 by Ministerial Order 038/CAB/MIN/ECN-EF/2006 of 11 October 2006 with a surface area of 760,000 hectares. However, it could not be managed effectively as the Order did not clearly define its boundaries sufficiently. WWF supported ICCN with a series of activities to consolidate its status as a protected area by clarifying the boundaries where uncertainty remained. Resulting from these activities, the provincial authority of South Kivu published a provisional decree, no 16/026/GP/SK of 20 July 2016, for the updating of the boundaries through participatory demarcation of the Itombwe Nature Reserve, with a surface area of approximately 5,732 km² (i.e. 573,200 ha), pending a final decree from the Prime Minister.

Management of the Reserve

Monitoring activities:The threats observed during different patrols were noted while keeping in mind that the INR may be classified as category VI by the IUCN. The definition of monitoring activities is based on what constitutes a threat to the objectives of conservation.

Assessment of poaching: Illegal activities observed in all the patrolled sectors include trapping, digging for minerals, setting up poachers' camps, trafficking smoked meat, setting up diggers' camps and hunting (used cartridges). The data on poaching represents cases identified from the start of 2018 to August 2019. The rate of poaching was very high in 2018 (poachers were encountered in 0.9 % of the patrols) and decreased with the support of GO and B&RD (0.2 % of patrols). It should be noted that the setting of traps was reported more often than other illegal activities. Action taken included the destruction of poachers' camps in the core zone and the dismantling of traps.

Evaluation of gorilla monitoring (supported by BR&D in 2018 and by GO in 2019): The activities for the monitoring of gorillas were increased in 2019 compared to 2018.

INR boundary demarcation with support from WWF: Taking into account the first phase of documenting activities that was initiated in September 2017, and the implementation/demarcation that started in May 2018, we believe that the efforts made by each of the stakeholders are to be commended. It should be noted that this titanic work has re-established and strengthened the collaboration between ICCN/INR and the communities bordering the INR through the personal involvement of their Majesties the Chiefs of Chiefdoms, the political-administrative authorities and civil society. Also to be commended are the Mwenga Pilot Territorial Security Council, who have been willing to support this process such that, in a short period of time, considerable results have been achieved in documenting and implementing the external boundaries of the Itombwe Nature Reserve in the Mwenga territory. The demarcation was extended to the chiefdom of Basile, where 12 km were demarcated; the chiefdom of Wamuzimu, where we demarcated 28 km; and part of the chiefdom of Luindi in the two areas of Irangi and Ilowe, where 11 km were demarcated. Out of 164 km of land boundary to be demarcated, we marked 50 km in less than a year, i.e. 30.48 %.

The data from the various patrols indicates a high level of poaching in the Elila sector in the Wamuzimu chiefdom. To address this threat, the local staff members had the idea to work within a local custom, activating an existing calendar related to the closure of the hunt. Thus, a traditional community surveillance patrol was organized in the Wamuzimu chiefdom. Before the community patrol went into the forest for the first time, a sensitization meeting of the customary guardians was held to obtain their support for a ban on hunting and other human activities in the core zone, and to proceed with the closure of hunting and the implementation of regulations on resource use in the multiple-use zone. With the personal involvement of the chief, the hunt was officially closed by the customary guardians from November 2017 to April 2018. Repeat offenders will be judged directly by the community authorities as per the custom.

Key Interventions in the Management of the Reserve

Before B&RD became involved in the management of the INR and its surroundings, the eco-guards spent most of their time in Bukavu because they did not receive additional payment for fieldwork. They went to the field once a month to qualify for their government salaries and took the opportunity to stay and do odd jobs for up to a week. Apart from supporting tracking activities and community patrols by Berggorilla & Regenwald Direkthilfe and The Gorilla Organization, B&RD tops up the rangers' bonuses to allow them to stay permanently on site and to be able to work effectively. Without these bonuses, it would have been difficult to plan intensive activities to support communities (e.g. installation of public lighting) for community sensitization and mobilization. With these interventions and the involvement of customary chiefs in the planning process (CoCoSi), the population feels it has a part to play in this work of general interest.

It is also important to thank the other organizations that also supported certain activities like various meetings and the training of community patrols: JGI, WWF, Strong Roots, Africapacity and RACOD.

However, this is not enough. A good preparation is needed, which requires a strong sensitization to awaken the population's awareness and to collect their opinions about (or reactions to) the conservation of the protected area, positive or negative. Secondly, conservation development activities need to be implemented that directly benefit the population. Taken together, these measures motivate the people to ensure that they participate and take positive action on site that favour the sustainable conservation of this nature reserve, which may become classified as a IUCN category VI protected area.