Implication of Local Communities for the Management of Maiko 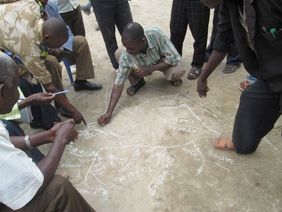 Over several decades, humans cohabited with the organisms in their environment more or less harmoniously. But recently, the use of modern tools in natural resource exploitation has tarnished the picture of this symbiosis, which has disappeared extensively over time in some regions of the planet.

During the post-colonial period, several protected areas in Africa were created, especially in the Democratic Republic of the Congo; as a consequence of this, local property owners' rights, inherited from their ancestors in accordance with local customs was divested in favour of wildlife conservation regulations without any dialogue, which entailed a climate of distrust and hostility between local communities and administrators of these protected areas.

Created in 1970, the Maiko National Park (MNP) did not remain safe from these curses. In such a context, peaceful cohabitation between the surrounding populations and the administrators of the park remained for a long time out of reach. The surrounding communities, not being aware of the importance of the MNP as a protected area, developed negative attitudes against it.

Faced with the deterioration of the environmental situation due to the increasing population pressure and massive competition to extract the natural resources indiscriminately, MNP managers have set up, since 2004, a community conservation approach aiming to involve local communities in the reduction of these threats to the park’s resources. The present article offers a brief description of a few achievements of this participative approach in Maiko National Park.

To promote the involvement of local communities, permanent committees of communication have been established in accordance with the National Strategy of Community Conservation adopted by the ICCN and its partners. It is in these settings of dialogue and exchange that all questions of conservation and development are debated and shared by the local communities with the technical accompaniment of the park’s community conservation team. One of more important renovations brought by this new MNP management approach is the reduction of hostility and bringing together local populations and park administrators through the CCCs.

In the neighbouring communities (Bapere and Bitule, in Lubero and Lubutu zones respectively), the CCC and the CLD have been able to gather information on the aspirations of the population and facilitated the collection of socio-economic data in the zone.

These activities have led to the sensitization of the local communities regarding the importance of the biodiversity of MNP, explanation of the laws dealing with nature conservation, hunting and fishing, the elaboration of local development plans in these two sectors, and support for alternative activities for the use of natural resources.

To improve the living conditions of communities adjacent to the park, socio-economic development projects have been undertaken. The CCCs of the North and South Sector have been assured of financial support for micro projects for agriculture, the raising of large and small livestock, and fish breeding. This applies to the CCC Twabinga-Osele, CCC Kayumba-Babongombe1, CCC Bondo-Banenu, the CCC Babongombe2 and the CCC Okoku in the Southern Sector as well as the CCC Bandulu and CCC Ombole in the Northern Sector.

Studying the legal texts creating MNP allowed community members to understand the logic of the legislation and to identify the parts of the boundary which are in dispute, or confused, so that multiparty commissions to look into the contested boundary could be put in place. This resulted in two workshops for capacity building, organized to train members of the commissions in techniques of data collection along the boundary, notably on themes such as participative cartography and the use of GPS for collection of geographical coordinates.

Together, the neighbouring communities and PNM Managers started the participative process of demarcation of the boundary of the park. Examining of the legal texts led to agreement on the acceptance of 31 segments designated under ordnance law N°70/312 of November 20th, 1970, which created the MNP with three sectors. The joint commissions of participative demarcation of the park boundary already started to collect data on the boundary segments identified for the park and those of the community reserves adjacent to the park.

Additionally, thanks to a local partnership between UGADEC and the Congolese Institute for the Conservation of Nature (ICCN), three nature reserves based on community management are operational along the west and south boundaries of the park. This combination of efforts allying national park and community-based conservation initiatives offers the best hope to ensure the maintenance of the biodiversity of this region.

In spite of the very real and serious threats the animal populations in the Maiko National Park have to cope with, this involvement of the neighbouring communities, the implementation of the demobilization process of rebel groups (Simba) and the support of some partners permit the ICCN/MNP to undertake regular patrols to cover about 23% of its total area.

Although with this limited protection - considering the general insecurity in some zones of the park - there still remain threats, a rich diversity of fauna remains in the three sectors of the park that comprise a priority zone for global conservation. The involvement of the local communities in the management of the park is considered an essential element for its rehabilitation by the Park Managers and the local chiefs.

Given this collaboration, in certain areas ICCN has been able to bring the control posts closer to the boundary of the park (headquarters, office of the posts, patrol post, camps on duty). The concessions obtained in the same way in Bitule, in Mundo, Wandi, in Loya/Balobe, in Manguredjipa, in Mwamba, and in Yongesa are not yet constructed. The concession that hosts the Park Headquarters in Osso is an area assigned to the park by the clans of Bayugu and of Banali under the authority of the local Chief Fazili Useni Musalabia of the Kumu community.

The construction of the first buildings of the Park Headquarters - including the rangers on duty, the welcome center, the offices, the residences of the chief park warden and officers and tourist lodging - was made possible only 45 years after the park’s creation under the 1st step of the Maiko Rehabilitation Project funded by the World Bank.

Among the main positive impacts of the activities of community conservation approach, it is worthwhile to mention also the changes in behaviour of the populations living around the park:

The efforts to conserve the natural resources that are provided by the neighbouring communities had been appreciably hampered by the weak interinstitutional collaboration around the park. This weak collaboration did not encourage solidarity between the institutions and the key actors of conservation to guarantee an environment favourable to the maintenance of biodiversity. Nowadays, the involvement of some officials (state-controlled services), and of some uncontrolled elements of the FARDC, in poaching is often decried by these communities.

Human activities in the park are still very intense. A considerable amount of poaching activities are perpetrated, in fact all kinds of illegal exploitation, under the blessing of those that qualify themselves as untouchables. Traps and snares, mining sites, hunting and fishing camps are always found during patrols in spite of the joint efforts provided by the communities and Park Managers. Local communities remain powerless in the face of the exorbitant power exercised by the state-controlled services and the armed groups installed inside the park.

Over and above the fragility of their power and their legitimacy, adjacent community members remain poor, alternatives are almost nonexistent and food insecurity is very widespread. Meat from farming is available, but expensive and in insufficient quantity, so that most rural families are dependent almost entirely on bushmeat as source of protein.

All these problems keep them from taking a clear and decisive position in relation to the preservation of biological diversity for the benefit of present and future generations.