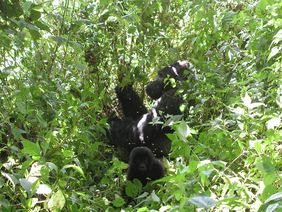 Grauer's gorillas are a subspecies of eastern gorillas and live in eastern Democratic Republic of the Congo - an area where fighting between various rebel groups and the national army have been going on for 20 years now. Since then efficient conservation work has only been possible in some regions and/or during certain time periods. Regional surveys already have shown that wildlife has suffered terribly under these extreme conditions, especially large mammals. Now a team of researchers, led by WCS and FFI, published a report on the status of the complete Grauer's gorilla population: Status of Grauer's Gorilla and Chimpanzees in Eastern Democratic Republic of Congo. They concluded that probably only about 3,800 Grauer’s gorillas are still alive (confidence range: 1,280 to 9,050). This means that the population was reduced by almost 80% within 20 years.

From the start we have supported projects for Grauer's gorillas, but during the past 20 years it has been especially difficult - all conservation NGOs working in that region had this same experience and some of them withdrew from eastern Congo. But we will do all we can to improve the conservation of these gorillas in the future, in cooperation with other organisations.

A video shows the problems explained in report.