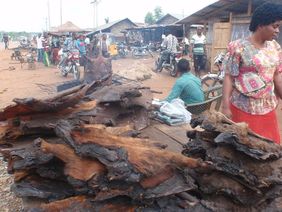 Bushmeat traders in Watt Market in Calabar, Cross River State, South Eastern Nigeria, are lamenting the poor sales of bushmeat since the outbreak of Ebola virus disease in Nigeria in July 2014. During a recent visit to the market, only 9 bushmeat carcasses were observed for sale by three resident traders (2 brush-tailed porcupines, 2 red duikers, 2 blue duikers and one piece of red river hog). In 2009 a visitor to the same market would have been able to find at least 20 carcasses belonging to 7 species on sale (Bassey et al. 2010).

The traders berated the current media campaign in Nigeria which has warned people against the consumption of wild animals (bushmeat) as a possible source of the dreaded Ebola virus disease. Many people have since heeded this advice and are avoiding bushmeat altogether. Demand for this once highly esteemed delicacy had been high prior to the Ebola outbreak in Nigeria and threatened the very existence of certain rare and endangered species. One of the traders interviewed complained that business has been very bad since the Ebola outbreak in July, and lamented that it can now take up to one week for her to sell a piece of bushmeat. Prior to the Ebola outbreak she was routinely selling 10 to 20 pieces in a single day!

Though trading and consumption of bushmeat is not banned in Calabar, not fewer than 4 states in Nigeria have since banned the harvesting and sale of bushmeat in an attempt to prevent the spread of Ebola - Ondo, Kano, Rivers and Kogi States. The federal government of Nigeria in its effort to contain the spread of Ebola has also banned the importation of bushmeat from other West African countries. At the community level, some communities have equally enacted local bans on the harvesting, trading and consumption of bushmeat amidst the fear surrounding Ebola. For instance, Buanchor and Kakwagom communities surrounding Afi Mountain Wildlife Sanctuary in Nigeria have banned the harvesting and sale of bushmeat with severe punitive measures taken against anyone found violating the community directives. Afi Mountain Wildlife Sanctuary is one of three sites in Nigeria where Cross River gorillas are found, and also contains the Nigeria-Cameroon chimpanzee. Consequently, patronage for bushmeat has drastically dropped, so that some dealers in the commodity have diverted to other forms of business while consumers now instead patronize meat from domestic animals and fish for their protein needs.

Thankfully the Ebola outbreak in Nigeria looks to have been successfully contained. Once the fear surrounding Ebola has abated it may be that the demand for bushmeat will soon return to normal. In the meantime, we hope that a long-lasting reduction in the sale and consumption of bushmeat, especially in communities surrounding protected areas, will help relieve hunting pressure on Nigeria's rare and endangered species. On the other hand, however, this will adversely affect the economy of families that depend on the bushmeat business for survival.

Bassey, E. Nkonyu, L. & Dunn, A. (2010): A Reconnaissance Survey of the Bushmeat Trade in Eight Border Communities in South-East Nigeria. Unpublished report to the Arcus Foundation and the WCS Nigeria Program