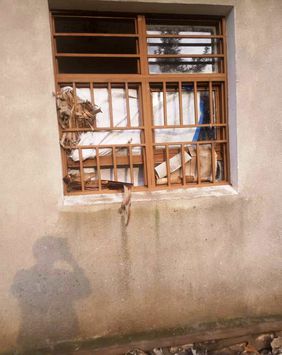 The attackers broke the windows of the patrol post and destroyed the furniture or took it away. (© Mumbere Nzanzu Getride)

In this article we will give an overview of the management of Sarambwe Nature Reserve (SNR) and a history of the attacks that have taken place in the vicinity of the SNR. We will report on the strategies for conservation and monitoring during these troubled times, the most recent attacks and the role of the trackers in the monitoring of the reserve.

General Summary of the Management and Protection of the Reserve

The SNR is located in the east of the Democratic Republic of the Congo. It shares a boundary (the state border) with Bwindi Impenetrable National Park in Uganda. It comprises 500 ha and at present its area is undisturbed by human activity. For the last couple of months, we have noticed that the northern zone (Mt. Sarambwe) has been visited by elephants, a first for the reserve. At the moment there are 7 elephants in parts of the area that had been cultivated by Ugandans before the international border was marked.

The SNR has only one post inhabited by rangers. The military loyalists (the joint force) who support the rangers and several trackers also live there. Other trackers live in the nearby villages. Weekly activities are launched from the Sarambwe ranger post, such as monitoring and anti-poaching patrols, observations of the flora and fauna, maintenance of the patrol trails and demarcation between fields and the reserve. Two cooks provide food for the patrols.

The SNR has sometimes been the target of armed attacks: the aims were to seize weapons, loot the ranger post and, perhaps, try to sabotage the rangers' work. In April and May 2012, the Sarambwe ranger post was attacked three times and one ranger was seriously wounded. The ICCN felt obliged to protect its staff by evacuating them from the post. At the time, there was intense traffic through the area, first the Mai Mai militia and the M23 rebels, then the Nyatura militia. A few days after the rangers had left, two civilians were killed in a nearby village. The vast majority of the population fled the area, including the trackers. The SNR was encroached for logging, the cultivation of crops and the grazing of domestic animals.

Six months after the rangers’ departure, and based on experience from the Parks for Peace Project, a warning system was put in place to monitor and inform the ICCN of illegal activity in the reserve. This permitted the ICCN to launch prompt and targeted action by patrols made up of rangers and military loyalists. This was made possible because the trackers were returning to their villages. The trackers' role was to collect information about illegal activities in the reserve and to maintain the post. This would then allow the reinstallation of rangers at the Sarambwe post.

In April 2014, about two years after the withdrawal of the Sarambwe rangers, ICCN reinstalled four eco-guards in Sarambwe. This team was reinforced by a group of soldiers from the joint forces. As the number of rangers was quite low and the trackers were well trained, the eco-guards were called back from Sarambwe and the trackers worked with the soldiers instead. It was only in July 2018 that ICCN created two posts, an Assistant Conservator and a Head Ranger, to manage activities and serve as officers of the judicial police. As such, their mission was to record offences and raise awareness among the offenders against nature conservation laws.

The Recent Murderous Attacks on Sarambwe Post and its Surroundings

Between 1 and 13 of October 2020, the Sarambwe ranger post and two nearby villages were attacked three times. The attacks were aimed at the trackers and members of partner associations of the reserve, the eco-guards and soldiers. One fatality occurred.

On Sunday, 1 October 2020 at 1 am, while everyone was asleep, a group of four forced their way into the home of the head tracker by threatening him. He was tied up, beaten and robbed. The robbers demanded his September salary. A neighbour of his who was watching managed to slip away and run to the ranger post to alert the soldiers. They intervened and the bandits fled, taking with them US dollars 20 but releasing a goat and two chickens, which they had just taken from the head tracker’s home.

On Saturday, 10 October 2020 at 6.30 pm, an unknown number of armed men burst into the Sarambwe ranger post and fired several bullets at the ranger house, the kitchen, the toilets and the soldiers’ accommodation. Everyone scattered, but unfortunately the officer, Diogène Bagurubumwe, could not escape and was killed. The post was badly damaged by bullets: all the glass panes in the doors and windows were broken, the corrugated iron sheets of the kitchen and the depot were riddled with holes, six plastic chairs were wrecked, the outside lighting destroyed, the provisions looted, tarpaulins on the new toilets, the soldiers' huts, and the solar panel were riddled with bullets, and the transformer and battery carried off. Nearly 65% of the goods were recovered and brought back to the Lulimbi station for safekeeping.

Nyarubugu village was also visited by bandits, who were surprised by Messieurs Munyemana and Kwatiraho, members of AJACAR (Actions des Jeunes Animés pour la Conservation de la Nature et Accompagnement au développement Rural). Munyemana is the treasurer of AJACAR and a Sarambwe plumber. He was badly beaten up and was taken to Kisharu hospital for inpatient treatment.

After the incident at the Sarambwe ranger post, the ICCN decided temporarily to suspend the activities of the rangers and soldiers of the joint forces in the reserve. The soldiers were taken to Lulimbi.

As for the trackers, they remained confident and preferred to continue working on their own, as they did in 2013 and during part of 2014 when the SNR had no staff. They are kept busy maintaining the post, the main trails in and around the reserve, making monthly reports and providing information about incursions, woodcutting, poaching, cultivation and all other threats to the reserve.

After the soldiers and rangers had left the RNS, illegal human activities started up again on a massive scale. People from Uganda entered the reserve with chainsaws, pad-saws, machetes and axes to fell trees and cut them to planks. They felled 14 trees, cut 10 of them to planks and left 4. They took the planks to Uganda. The trackers found them 5 days after the start of their activities and were able to confiscate 2 pad-saws and one machete. The trackers went on patrol by themselves and wrote their reports each evening which were then sent directly to the responsible person of ICCN.

The Congolese population started to hunt again with dogs and traps after the soldiers had left. Several traps were destroyed and a squirrel was freed from a trap. Five villagers were seen from a distance and finally identified as hunters. After the trackers had talked to the hunters they did not continue their poaching.

We are grateful to ICCN, especially the Principal Conservator Sekibibi Biriko Bonge, who encouraged the Forces Armées of the Democratic Republic of the Congo to quickly send soldiers to the Sarambwe post again. The arrival of the soldiers at the Sarambwe post definitely stopped the encroachment by Ugandans who had cut trees and the hunting by the Congolese.

At the moment, the reserve is well monitored and the trackers are using the post again. The villagers are calm and have returned to their usual occupations.

We want to help Sarambwe - please support our efforts!

We want to replace as much as possible of the material that was stolen or destroyed during the attacks. We are planning to use donations without a certain keyword that we receive until Christmas. But of course you can also donate for this urgent help by adding the keyword "Sarambwe" to your donation.