Community Conservation Is More Beneficial for the Park and Local Communities 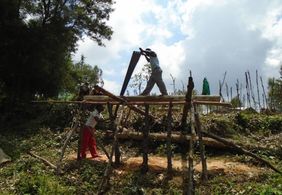 This is a quote regularly heard among communities around the Kahuzi-Biega National Park (KBNP) in the Democratic Republic of the Congo (DRC) after experiencing the approach of conservation and development by the Pole Pole Foundation "POPOF".

The Kahuzi-Biega National Park is surrounded by 7 different communities: Shi, Lega, Kano, Tembo, Twa, Nyanga and Havu. Although they have some shambas (small fields) to grow crops on to feed themselves on a subsistence level, they still rely on natural resources from within the protected area of KBNP. The natural resources are composed of fauna, flora and mineral mines. The fauna is used for eating bushmeat and for sale.

The flora is being devastated by the demand for fuel, charcoal, poles, and timber; it is removed in order to create arable land and farms. Medicinal plants, mushrooms and honey are collected. Mineral mining leads people to enter the park for ores (cassiterite, coltan, and gold) through the process of artisanal mining. The KBNP's law enforcement was established in 1970, under the control of the Congolese Wildlife Service (the Institut Congolais pour la Conservation de la Nature, ICCN).

Anti-poaching guards are recruited from the youth of the communities around the site. Patrols are carried out daily and some are done during the night to try to secure the park. Communities from both the highland sector and the lowland sector know the park well and watch the movement of the guards closely.

In general, if teams of rangers patrol in the eastern sector, people will move into the western sector to avoid them. Anyone who is found or arrested inside the park is automatically called a "poacher".

Poachers use cables or wires to make traps for catching or killing antelopes and hogs or other game; unfortunately, young gorillas may get caught in these wire traps. Some die, while others lose limbs and survive.

People who enter the park also cut trees and bamboo, and set fires to clear areas and spur new grass growth to graze their cattle; they drop faeces as they have no proper sanitation in the park. During the patrols, rangers collect information on infractions, such as identifying and destroying snares stretched by poachers, and seeing where bushfires have been made and where tree cutting is taking place.

Who Is Entering the Protected Area?

A number of categories of people enter the park illegally. Most of the women and girls who enter do so to collect wood, mushrooms and medicinal plants. Men and boys enter to cut trees and bamboo, for bushmeat trapping and for artisanal mineral digging. Bushmeat is sold to the local markets in the surroundings of the park very secretively. A whole smoked hog will be sold for US$ 100, or, when sold separately, a limb costs US$ 25. An antelope male will cost US$ 70-80 or a limb US$ 10-15.

Rangers ambush and arrest people who enter the park and then lead them to the headquarters of the park to put them in jail. At times the number of arrested people may reach 45-50. They are all kept in a small room where it is hard to live together; the room has one tiny window and air for breathing is limited. They are given limited food, relying on family members to bring them extra sustenance. Every morning two or three rangers with guns take them to do labour, such as to cut grass, to carry stones for building, or to work in gardens until late afternoon.

It has been a great issue for the communities living around the park to find the money to pay fines due to the poverty they face. In general, when the jail term was finished and the guilty persons were not able to pay fines, they were released by the park authorities. In spite of the risk of jail and fines, people who have no other option than to rely on the park for their survival continue to encroach on the park's natural resources. There are some people who had been arrested more than ten times inside the park for different offences. Although they were released upon paying the fines, or after a longer period if they had not paid the fine, they returned into the park again.

The non-governmental organization Pole Pole Foundation, "POPOF", a local NGO created by rangers of the KBNP in 1992, approached the communities in the highland sector in order to alleviate conflicts existing between park managers and surrounding communities. POPOF has begun several different activities through different departments such as community conservation, environmental education, scientific research, eco-tourism and the department taking care of women, children and family. Among the activities and the approach, POPOF has begun mobilizing people to plant trees in their own villages instead of being arrested for entering the park to collect wood.

The majority of people agreed with the POPOF team's ideas and the tree nurseries started in 1993 in four groupings surrounding the five habituated gorilla territories in the KBNP. Those groupings are Mudaka, Miti, Bugorhe, and Irhambi Katana. Trees take 7 years to grow until they can be used in the highland sector. Every time POPOF met with villagers and they discussed which tree species to plant in their areas. They said according to the dominance of red soil, the best option was to plant Eucalyptus, Grevillea robusta, Spathodea sp., Markhamia lutea, Cupressus sp., etc.

Eucalyptus, Grevillea and Cupressus, once mature, are used for planks, charcoals, poles, and firewood while Markhamia lutea and Spathodea are used for wood carvings and fertilizers. Each tree nursery produced 300,000 seedlings that were distributed to inhabitants who planted those in their fields, gardens or to make boundaries with their neighbours' fields. After seven years (in 2000), inhabitants who benefited from the seedlings started to use these trees that had been donated to them by POPOF. They made planks, charcoal, poles and firewood or sold a whole tree for US$ 20. They were able to earn money which could be used for buying food, clothing, to pay school fees for their children and to create small businesses. Other inhabitants who planted the tree species for carving were able to sell them to wood carvers who are former poachers converted to carvers by POPOF. One tree was sold for US$ 5 and carvers made gorillas sitting or walking in different poses to be sold to tourists. However, the lack of tourists in the area due to war and the ongoing post-conflict period means there is a shortage of buyers for these wood carvings.

This model approach created by the Pole Pole Foundation as a local NGO was created with input from the rangers of the KBNP and members of the surrounding communities. This is the model preferred by the communities in the neighbourhood of a protected area rather than locking up hungry, poor people in jail and making them pay fines when they are facing poverty. However, the lack of funds prevents POPOF from doing its effective work to involve communities in the common task of protecting KBNP, a world heritage site in peril, by benefiting surrounding communities to reduce threats to the park's flora and fauna. It is said that "if you give a man a fish he will eat for a day, but if you teach him how to fish he will eat for the rest of his life". We should all know that "it is not the hand which gives but rather the heart gives". If we can support surrounding communities rather than criminalising them, we can achieve much better conservation outcomes.

Park regulations on poacher penalties related to infractions in the 1980s, 1990s and 2000s