Clean Water for Cross River Conservation; Rangers on the Frontlines 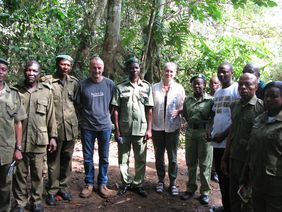 In a previous article, we documented bushmeat trafficking out of West/Central Africa for sale in underground markets in Europe and North America. Currently, we are working on tracking how these meats move out of Africa and into developed world countries. However, this work occurs when the animal has already been killed - a point when it is already too late for trafficked individuals. In the case of small populations of vulnerable species such as the Cross River gorilla, the removal of even a few individuals for consumption can have a serious impact on population survival. That is why strategies that protect populations before their removal from a habitat are important.

Ranger programs are present in many protected areas and can be highly effective in helping to preserve vulnerable species in situ. Rangers are the individuals on the frontlines of species conservation, and play a direct role in the conservation of at risk populations. In Africa, hunting is one of the most immediate threats to species survival; rangers help to capture and prosecute hunters and others who exploit natural resources inside the parks. They also have the added advantage of being able to have an impact on stopping trade before wildlife is killed and taken out of the parks; rangers protect species by their very presence in an area and through patrols which discourage hunters from entering areas.

A ranger's work is not easy; often, it is physically rigorous, involving long days trekking through difficult terrain. For this reason, a healthy body is essential and clean drinking water can play an important role in a ranger's ability to maintain the strength to carry out effective patrols. In the Cross River Region, Tengwood Organization is carrying out a 'Clean Water for Conservation' project with materials provided by another Swiss NGO: Aqua-pura. Aqua-pura designs and provides water cleaning systems, free of charge, for worthwhile projects. Their systems purify water using UV-C light, destroying bacteria as well as viruses without the use of chemicals, and allowing essential minerals to remain present in the water. The systems run easily with a solar panel and 12 volt battery. Two designs exist; the first is known as the 'waterdrop' system and consists of a small handheld device that purifies water in a 1.5 l PET bottle. The second is known as the 'waterflow' system; the UV-C light and filtration components can be mounted on a wall, and with access to a water source (i.e. a stream/river, borehole, or rain water) and the addition of a storage tank and pump, the waterflow system can purify 400-600 l of water per hour. Aqua-Pura's water purification systems were designed for simple and efficient use in Africa and are being successfully utilized in a number of hospitals, schools, and other forums in Togo, Cameroon, Congo, Kenya, Uganda, Madagascar and Peru. For our 'Clean Water for Conservation' project, Tengwood Organization proposed the novel idea of combining water purification with a conservation objective.

The project has two main goals: the first is to provide ranger programs with clean, safe drinking water in order to enhance ranger health, and by extension, patrols. The second is to combine the provision of clean drinking water with an environmental education component. We are testing the feasibility of using these water purification systems for conservation purposes in two protected areas in Cross River State, Nigeria: the Afi Mountain Wildlife Sanctuary (AMWS) and the Cross River National Park (CRNP), Okwangwo Division. These two protected areas are located within a larger region of mountainous and forested terrain that is part of an important watershed, providing drinking water for plants, wildlife, and people alike. Numerous communities and community lands can be found in the surrounding lowlands. The humans in these communities, by their very presence, become a part of the watershed system. Human disturbance via farming, hunting and urbanization is having an increasing impact on the water sources in this region; they are altering and changing natural structures within and around the parks and because of this, are having a growing impact on the natural environment upon which they depend for sustenance.

Educational materials designed to address the importance of watersheds for school programs and communities living near vulnerable wildlife areas will help to achieve our environmental education objective. By addressing the interdependence of natural structures within a watershed (i.e. waterways, forest trees, plants and wildlife) we can show how natural structures impact watersheds. By addressing the links between natural structures (i.e. waterways, forest trees and plants and wildlife) and human activities, we can bring a greater awareness to communities about the importance of watersheds to the entire ecosystem and how they are directly impacting these watersheds. We will also present some of the alternative actions that could help to create a more sustainable future for their water sources.

The Afi Mountain Rangers patrol Afi Mountain Wildlife Sanctuary (AMWS), a mountainous region of approximately 100 km² that is a part of the range of the Cross River gorilla (Gorilla gorilla diehli) and harbours a small population of this important subspecies, as well as populations of the Nigeria-Cameroon chimpanzee (Pan troglodytes ellioti) and other endangered primates such as the drill monkey (Mandrillus leucophaeus). The Afi Ranger Program is managed by the Cross River State Forestry Commission, with support from WCS Nigeria. With technical assistance from North Carolina Zoo, WCS manages a CyberTracker-based law enforcement monitoring system at Afi. In July of 2012, a series of landslides occurred, hitting especially hard on Afi Mountain. It is thought that a combination of heavier than normal rains coupled with the presence of a growing number of illegal farms may have resulted in soil erosion and consequently, a series of landslides that occurred on the mountain. These landslides impacted the watershed to the extent that formerly potable water sources for several communities disappeared or became silted and polluted. The impact of these landslides on drinking water sources persists even into the present day - many water sources formerly utilized by the local communities are no longer potable.

Near the summit of Afi Mountain, the rangers maintain a base camp, from which patrols are carried out. The stream that supplied this camp was also affected by the mudslide. To start our project, water from the stream was tested before and after purification with the waterdrop system in order to detect the presence of potential water pathogens. Escherichia coli is a fecal coliform bacterium, mainly found in the gut of warm-blooded mammals, including humans, and is used in water quality testing as it is one of the best indicators that other harmful pathogens are likely to be present (Edberg et al. 2000). Levels of E. coli in the Afi base camp stream were found to be above acceptable levels for drinking water and the Afi Ranger Program was then selected to test the hand-held waterdrop system. In March of 2016, training sessions on how to use the system were carried out with the Afi Rangers and WCS staff and materials were then transported to the base camp. The rangers will be able to use the system to purify drinking water before heading out on patrols. The waterdrop system will be monitored for the next 3 months to periodically test water quality and to determine the feasibility of its usage for ranger patrols.

The second part of our project is slated to take place in the Cross River National Park, Okwango Division, where populations of Cross River gorillas and other primates can also be found and where the watershed is also in jeopardy from human disturbance. The Okwangwo Division of CRNP is approximately 1000 km² and is contiguous with the Takamanda National Park in Cameroon. The Okwangwo and Oban Divisions of the park are managed together by National and Cross River State Governments. One of the ranger stations, located near the northwestern boundary of the CRNP, Okwangwo Division, is supplied by a perennial stream. This stream formerly provided enough water for the workings of the ranger station as well as the needs of the nearby community in the village of Butatong, with a population of roughly 1800 people. However, community forests around the park are being heavily farmed as populations grow.

Farming in this region typically involves clear-cutting a plot of land. If large trees are present, they are burned at the base and felled, and trees and brush are removed before planting. The removal of natural vegetation in the farms above the stream has resulted in a decrease in the flow downstream. A pool, which provides water to both rangers and community members, has been steadily decreasing in size each year. During a WWF project in the late 1990s, a concrete wall was placed in the stream in an unsuccessful attempt to create a reservoir. The collective result of these human disturbances is a very small pool which must provide water to the rangers and park staff, as well as to the community. Rangers told us they must visit the pool very early in the morning as the community is permitted to enter the station and collect water; during the course of a day, the pool becomes depleted to a point where it becomes no longer possible to extract drinkable water. This pool is one of only 2 sources of drinking water for the Butatong community; the second is a hand-pumped borehole in the village that incurs long lines as people try to meet their daily water needs. We are currently working on the details of installing the waterflow system for this ranger station in tandem with creating an educational program for the community, local schools, and visitors to the station.

Overall, these water systems should improve working conditions for ranger programs in the parks of Cross River by providing fresh drinking water for ranger patrols. They will also provide an opportunity to educate local communities to be more aware of their direct impact on the environment around them. Specifically, how their actions directly impact their watershed; the rivers and streams, the forests and wildlife, and ultimately themselves. The Butatong community's awareness of ongoing water shortages provide us with an ideal opportunity for environmental education. Our results will determine if the systems may be useful for other ranger programs and also for other local communities who can have a direct impact on helping to save wildlife habitats in the process of maintaining their own natural water resources.