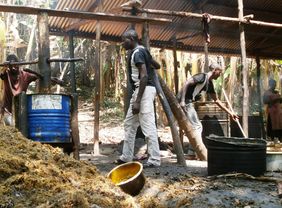 The Sarambwe Reserve is a 900 ha area adjacent to the Bwindi Impenetrable National Park in Uganda. About one third of its area has been deforested; at least a part of it is regularly used for growing subsistence crops - mainly by Ugandans who pretend that the land is on the Ugandan side of the border.

Although its surface area seems rather small, the Sarambwe Reserve shelters a very rich and abundant fauna. This includes six species of primates: blue monkeys, red-tailed monkeys, baboons, chimpanzees, gorillas and black-and-white colobus monkeys, and one representative of the pig family, the bush pig. There are 23 gorillas: one group of 12 individuals, a second group of 8 individuals, a recently arrived group of two, and a solitary male. The other primate species have been observed in impressively large groups over the last three months, with numbers per group up to 150 for baboons, 72 for red-tailed monkeys, 57 for black-and-white colobus, 49 for blue monkeys and 27 for chimpanzees. Such a large number of primates in a very small and badly invaded forest remnant can be explained as follows:

Since 2008, when our sustained interventions in the area around the Sarambwe Reserve were initiated, many forms of support have been delivered through micro development projects for the benefit of the local population and the schools (in addition to monitoring of the reserve). The beneficiaries of micro-projects have reported several cases of poaching and trespassing into the park to the trackers, and to the joint task force of army and ICCN. These denunciations have assisted the officers responsible for conservation in addressing intrusion into the reserve for the purpose of poaching, logging or agriculture. Unfortunately, these denunciations are occurring only on the Congolese side.

For the period June to September, it was estimated that 114 ha deforested land was being cultivated, 14 ha of which are located within the part that is managed by the Congo, and 100 ha of which are located within the area where the boundary is disputed. The trackers destroyed 8 ha of beans and 5 ha of banana plantation. Three cases of pit-sawing have also come to light, with the arrest of one pit-sawyer and the confiscation of 25 planks. Bush fire destroyed 36 ha in an area that had been cultivated previously. Thanks to the denunciations noted above, 25 traps were dismantled and three poachers were arrested, one of whom had a dog. As a result of the severe dry season which gripped the region, pastoralists tried to take their cows into the reserve for grazing. Again thanks to the denunciations, 39 cows belonging to one herder were seized: the file was transferred to the ICCN for further action. Other pastoralists subsequently did not try to take their cows into the reserve.

We can rejoice that these poachers were arrested as we did not know that they had monitored the movements of the trackers and tried to find out about the patrol's itineraries in order to know where to poach without encountering the trackers. At the moment, thanks to the population's enthusiasm for the micro-projects, people do not hesitate to denounce the poachers and even to divulge their plans. This is a basis for effective monitoring and protection of the Sarambwe Reserve.

At the beginning of March 2017, several development activities were started in the vicinity of Sarambwe and Mount Tshiaberimu. These activities aimed to increase the income of the local population, to valorise local products, to reduce the pressure on certain vulnerable resources and to introduce new economic activities.

A bee-keeping project aimed to valorise the trees that were planted as part of the projects for tree nurseries for schools and for the trackers' wives ‒ which were funded in past years ‒ and to increase the beneficiaries' incomes. A total of 130 beehives have been manufactured and placed in trees: 50 on Mount Tshiaberimu and 80 in the Sarambwe Reserve. Of the 50 hives on Mount Tshiaberimu, 35 already contain bees, as do 72 hives out of the 80 in Sarambwe. In Sarambwe, honey was harvested for the first time from 30 hives, with an average 3.5 litres per hive, which is equivalent to USD 21 income per hive. It should be noted that the production of honey in the dry season is typically about half of that in the rainy season. A large production is thus expected for December 2017.

Palm oil press project in Sarambwe. This project has set up three palm nut presses in order to harvest the old oil palm plantations and thus to generate income for the beneficiaries (recipients of oil palm presses, owners of oil palm plantations or of individual oil palms - and also for the consumers as the sale price of oil is lower due to a reduction in production costs). This is a project that benefits the entire population in the area. Three presses have been provided to the wives of the trackers, producing 40 litres of palm oil per press per week. This generates approximately USD 56 per press per week, supplementing income from daily activities.

The fish-farming project in Sarambwe is also going well. This is a duplication of the fish-farming projects on Mount Tshiaberimu. At the start, the project encountered the problem of a lack of fry in the surrounding area. Fry were eventually located in Biruma, which is close to Rumangabo, approximately 75 km south of Sarambwe. The ponds were subsequently fully stocked.

The bamboo-planting project has been met with great enthusiasm. Due to the many ways of using bamboo, the population has subscribed to the project to such an extent that the demand cannot be fulfilled by the current project alone. The current project has secured 15,000 bamboo plants, but almost 2,350 persons have expressed the wish to have bamboo plants or cuttings. In view of the reduced size of the fields of most of the population, the bamboo will be planted in several remoter fields. The inhabitants of the Kabeka and Vikuku villages have expressed their wish to establish a bamboo forest.

Furthermore, young people around Mount Tshiaberimu have just created a club called "Friends of the Bamboo". The 15 founders of the club have asked for 200 cuttings each. They have received three footballs in support of their initiative to organize football matches at which they sensitize the population to the conservation of the gorillas and bamboo. The population's passion for the bamboo project gives rise to the hope that searching for bamboo within the park will soon decrease significantly - or stop altogether.