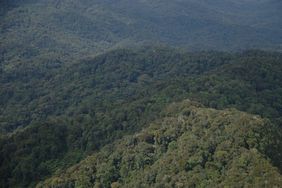 On 5 May, 2017 a convoy of conservation workers from the Itombwe Reserve was ambushed by an armed group. During this attack, a ranger was fatally injured and two other people were briefly abducted. The victim, Anselme Matabaro, was an ICCN staff member and deputy chief of the Itombwe reserve. He was seriously injured and died afterwards.

The bandits attacked and abducted the rangers, including representatives from the Wildlife Conservation Society (WCS) and World Wildlife Fund. The driver of the convoy was shot in the hand. Most of the group were released after a few hours.

Years of conflict in the region have also brought armed groups to Itombwe, who illegally exploit coltan, cassiterite and diamonds. They also generate money by kidnappings; abductions by armed rebel groups have increased in recent years in the DRC. Instability and conflict not only affect wildlife in protected areas but also those trying to protect them. Conservation areas across the country have been plagued by violence against rangers - most recently in Garamba. Across the world over 1,000 have been killed in the last decade, according to the Thin Green Line Foundation.

Summary of an article by Naomi Larsson in The Guardian, London