Bamboo Cultivation in the Vicinity of Mt. Tshiaberimu 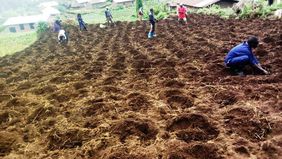 In order to preserve the ecosystems of Mount Tshiaberimu, Berggorilla & Regenwald Direkthilfe has made it its duty to keep up its support for this fragile site. Two forms of support are provided: direct support for the trackers for gorilla monitoring within the park, and support for community development and improved sanitation for the well-being of the population. Community development activities are chosen from a range of requests. Activities are chosen that contribute to the development of the community while also having a positive impact on the conservation of Mount Tshiaberimu; in addition, the activities should provide opportunities to sensitize the local residents regarding the protection of the gorillas.

Nurseries and the Planting of Bamboo

Bamboo is a precious material which the locals use extensively for a range of purposes. For example, they use bamboo to make small wrappings for fruit and larger baskets for potatoes, cabbages, leeks and other vegetables. Bamboo baskets are also used to transport chickens, or fish from Lake Edward, to the villages, and to make mats and implements for cleaning teeth. More than 70 % of the population in the vicinity of Mount Tshiaberimu use nothing but bamboo for the construction of their houses (Kyungu Kasolene 2015, unpublished report). Bamboo is also sold in its unprocessed form in several markets such as Masereka, Nyabili, Kilalo/Luveve and Magheria.

As yet, there is no estimation of how much bamboo is used in this way - but it is clear that objects or baskets made from bamboo can be found in every household in the territories of Beni and Lubero, where the population exceeds one million people. The same objects can also be found in households outside these two territories, and just about everybody passing on the Goma–Butembo, Butembo–Beni–Bunia and Kisangani routes buys food wrapped in bamboo leaves.

Considering the thousands of people who travel on these routes every month, we can imagine the size of the area that has been cleared of bamboo to supply this demand.

On Mount Tshiaberimu, gorillas from the Kipura family spend between 60 % and 90 % of their time in the bamboo zone, and the Katsavara family spends between 35 % and 90 % of their time there, depending on the season (GO Report 2014). It should be noted that this vegetation zone, which used to cover almost the entire area of Mount Tshiaberimu, now only occurs at the highest altitudes, and its area continues to decrease.

In the villages of Camp Ngai and Kikyo, two sub-sectors of Mount Tshiaberimu, the most common illegal activity observed in the park is the cutting of bamboo. To cut bamboo, the local people cross remote borders of the park. The bamboo is taken to the villages of Masereka, Vuholu, and Kivetya - areas that are known for their production of vegetables (cabbage, carrots, beetroot, onions) and potatoes - produce that is sold wrapped in bamboo leaves.

Planting bamboo in the Chiefdom can serve not only to help stabilize the bamboo zone but to help it regenerate and spread back to the lower-altitude areas of the park. This could create favourable conditions for in-coming gorillas and help to increase the gorilla population at Mount Tshiaberimu, which is in decline.

Currently, a project that plans to plant 15,000 bamboo plants is being finalized. Beginning in March 2019, nurseries have been established with a target of producing 15,000 plants and shoots. Nursery staff were, unfortunately, hampered by an unusual dry season resulting in the loss of 65 % of plants from cuttings and 10 % from shoots; in total, 5,625 plants were lost. The first round of production therefore resulted in only 9,400 plants. Work is under way to replace lost plants with plants from the shoots only. The nursery staff have planted 3,200 more plants but their efforts and funds are now exhausted. 84 % of the project target has been achieved.

The main target groups of this project are the large villages of Kyondo, Buwagha, Vurusi, Luseke, Kabeka, Bulambo and Vikuku. The smaller settlements between these large villages have not been forgotten - it is hoped that everybody who wants bamboo plants will get some.

This project aims to improve potato cultivation in the vicinity of Mount Tshiaberimu by bringing in new techniques and high-yielding seeds.

The potato cultivation project was identified as a request of the population via the CEDAK Association (Coalition for Sustainable Environment Near Mount Kyabirimu) and provides both an impetus for development and an activity that can serve as a focus for awareness activities for gorilla conservation.

According to the association, 85 % of the inhabitants of the Beni territory in general - and those of the communities bordering Mount Tshiaberimu in particular - depend on agriculture. This activity is carried out mostly by women whose agricultural produce contributes to the survival of their families. These women farmers face difficulties in acquiring improved seeds that will return a viable profit from their agricultural production. Failure to acquire improved seeds leads to lower agricultural productivity, which means that no household income is generated because women farmers produce only enough for direct consumption in the households, with none left for sale in the market. This leads to the slopes of Mount Tshiaberimu being invaded as people search for arable land, which results in the degradation of the forest and causes conflicts between eco-guards and local communities.

This project was chosen to make potato cultivation more popular and to raise the socio-economic standard of households by increasing agricultural production, thus reducing pressure on the Tshiaberimu forest.

The project aims to

The CEDAK Association organised four groups of people, two for women and two for young people. Each group received a field and received 344 kg of Carolis potato seeds, a potato variety whose yield is estimated to be four times that of the local varieties.

These nucleus groups started by acquiring their fields, collecting natural fertilizer (cattle dung), ploughing and then planting the seeds in the naturally fertilized area. Weeding has already been done and spraying is underway to eliminate crop pests. The harvest is scheduled for mid-November 2019.

Beekeeping: The first beekeeping project was carried out in 2017 on Mount Tshiaberimu and in Sarambwe. The success of this project led to its replication on Mount Tshiaberimu, using only local hives. This beekeeping project is progressing well. 100 hives have been manufactured and supplied, 25 hives already contain bees and with the start of the rainy season, the plants will start flowering and the remaining hives should also be populated.

Project for the development of drinking water sources: The majority of communities bordering Mount Tshiaberimu suffer from a lack of drinking water. This results in the spread of waterborne diseases such as diarrhoea, typhoid, amoebiasis and ascariasis, leading to poor health and affecting people's ability to work, therefore having a negative impact on production and on household incomes. Over 80% of households do not have easy access to water. To access water, they sometimes need to travel long distances on very steep terrain and run the risk of slipping and injuring themselves. The women and children are responsible for collecting water. They spend a lot of time doing this and it sometimes exposes them to sexual violence.

A first water supply project is in its start-up phase. This project will contribute to improving the health of the population in Vurusi village (bordering Tshiaberimu) and will mean that women and children need to spend less time collecting water. Having time and being healthy helps them to work effectively and this in turn contributes to household incomes.