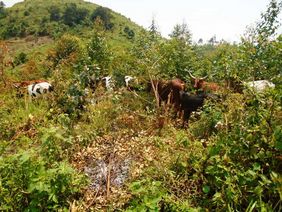 A Year of Protection of the Sarambwe Nature Reserve by Trackers Unsupported by Rangers: Results and Lessons Learnt

The protection of protected areas in the Democratic Republic of the Congo is carried out by ICCN eco-guards. They are armed and have the right to defend themselves in case of aggression and may act in the form of summons. Eco-guards have the right to apprehend poachers, to charge them and to transfer them to the courts for correction.

On 10 October 2021, a year ago, the ICCN (Institut Congolais pour la Conservation de la Nature) together with loyalist military personnel assigned to this reserve who worked with the trackers for the conservation and protection of the reserve withdrew from the Sarambwe Nature Reserve following an attack on the post which resulted in the death of a ranger. The withdrawal of the eco-guards has put a halt to protection: the old habits of the population have quickly re-emerged, including poaching, the grazing of domestic animals, the cutting of wood, and the clearing of forest for fields. These activities had ceased completely after the Democratic Republic of the Congo determined the State border together with Uganda in 2019.

The border was first defined in 1915, and this forms the basis of the current demarcation. However, many border markers were not put into place during the initial demarcation of the border between the DRC and Uganda, carried out by the Belgians and the British in 1926. By the end of this first work some border markers were in place, but unfortunately some of these were excavated by people who believed that valuable materials had been buried there. As a result, there has been widespread uncertainty about the accuracy of the border line between the DRC and Uganda.

For over 10 years Ugandans have been invading the Sarambwe Reserve in the pursuit of illegal activities such as agriculture, pit-sawing, poaching and grazing of livestock, under the protection of the Ugandan military and violating the State border in the process. Approximately one quarter of the reserve was affected by those illegal activities.

In March 2019, the two governments sent their respective experts to deal with this issue and to help with the delimitation of boundaries. The same team returned on 5 June 2019 to carry out work on the demarcation of a 16 km stretch from the confluence of the Ivi and Kagera rivers to Nyabwishenya (in the Sarambwe Reserve) and from Nyabwishenya to Kabwa Hill (the Ugandan/Congolese border outside the reserve). The border is marked by posts, which makes it easier for the trackers to identify any border violations.

The withdrawal of the rangers and the military effectively ended the conservation of the reserve. The former poachers and encroachers have returned and are free to carry out their illegal activities. All these people are trying to make the most of the situation as quickly as possible. Four days after the rangers left, the alarm was given that the reserve was being encroached. Almost immediately, the trackers resumed their work without the rangers, and they continue alone to this day.

Result: a Year of Work by the Unsupported Trackers

The greed for natural resources and the search for more arable land leads to poaching, the grazing of domestic animals, the cutting of firewood, deforestation and land clearing, and the establishment of fields in protected areas. This can happen anywhere, but it is particularly prevalent in the eastern DRC. An abandoned protected area in this part of the country, especially one the size of the Sarambwe Reserve (around 900 hectares), can be completely destroyed in less than six months.

In Gorilla Journal 61, published in December 2020, we reported on the trackers' decision to continue their work despite the absence of the eco-guards and the military. We demonstrated that the activities of the trackers resulted in the cessation of illegal activities, particularly pit-sawing, hunting with dogs and the establishment of new fields.

From January to September 2021, the trackers have continued their herculean labour. Two patrol teams were established and the entire reserve was covered once a week. 270 patrols were deployed in 189 days and 712 observations on wildlife were made. Because the reserve is small, we are particularly interested in the observations of flagship species and in estimating their number or group compositions.

Elephants were observed in the reserve in January, May, June, July and September 2021. Their number varied between 1 and 3 individuals.

The most represented primate species are red-tailed monkeys, black-and-white colobus, baboons, chimpanzees and blue monkeys - they were all observed throughout the reserve. At 12-25 encounters per month, red-tailed monkeys were observed most frequently. They form several groups of between 6 and 36 individuals. Baboons were observed 9-16 times a month in groups of 3-36 individuals. Black-and-white colobus were encountered between 6 and 14 times a month in groups of 4-44 individuals. Chimpanzees were seen in up to 4 groups with 6, 6, 8 and 12 individuals, respectively.

The other flagship species seen in the reserve were bush pigs and duikers.

Illegal activities were mainly located at the edge of the reserve, at the border between Uganda and the DRC, where Bwindi National Park does not touch the reserve. These activities include attempts to cultivate crops within the reserve, people travelling through the area, trapping and the grazing of domestic animals. Illegal activities were at a very low level between January and August 2021, but intensified in September 2021, when several fields up to 10 hectares in size were prepared for cultivation, 11 traps and some cows were found within the reserve.

The trackers have been indefatigable in their efforts to discourage illegal activities. All the planted fields were destroyed and the fields under preparation were monitored to prevent further activities. In January, three Ugandan goats were confiscated and returned to their owners once sensitised as to the illegality of their actions. In April, a Ugandan poacher was arrested and turned over to the immigration service of Kisharu, a village adjacent to the reserve. The trackers have visited Uganda three times to raise awareness among local chiefs and the military for the protection of the reserve.

In summary, the trackers have lived up to the challenge of protecting the Sarambwe Nature Reserve despite the absence of eco-guards and the military and without carrying firearms. One of the lessons to be learned is that the local population is capable of managing nature reserves if it is taken care of and is mentored.