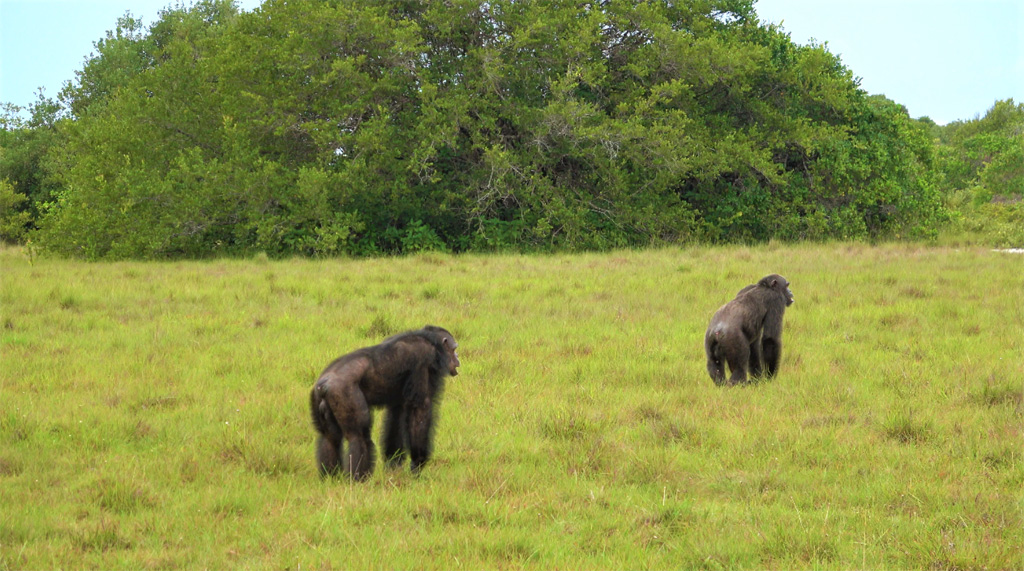 Chimpanzees on patrol looking for other great apes (© Lara Southern)

In 2019, in Loango National Park, Gabon, we observed two lethal coalitionary attacks by chimpanzees on gorillas, with each attack lasting approximatly an hour and involving tactile threats, coalitionary displays and physical attacks from chimpanzees towards gorillas. During these encounters the gorillas counter attacked and defended themselves using contact aggressions and displays. These attacks were unlike previous interactions observed between the two sympatric apes and ultimatly resulted in the death of two gorilla infants. I will describe the Loango field site, summarise the two encounters and discuss our hypotheses on why these events took place.

Loango National Park is a safe haven for numerous endangered species, including two of the African great apes, the central chimpanzee (Pan troglodytes troglodytes) and the western lowland gorilla (Gorilla gorilla gorilla). In addition to sites like Goualougo/Mondika (Morgen & Sanz 2006), Nouabalé-Ndoki (Kuroda et al. 1996), in the Republic of Congo or Lopé (Tutin & Fernandez 1993; Tutin et al. 1991) also in Gabon, Loango is one of the sites across tropical Africa where these two species share the same resources and where there is the chance to directly study their unique sympatric adaptations. Loango is also diverse in terms of habitat; the Ozouga study site comprises a mosaic of different habitat types including coastal forests and savannah in the west, multiple lowland swamps fed by a lagoon in the east, and heterogeneous tropical rainforest throughout.

The Ozouga research site, located in the northern sector of the park, was founded in 2005 and in 2017 we began systematic focal behavioural data collection with the Rekambo community of chimpanzees. During our daily field work with the chimpanzees, contact with gorillas is mostly indirect and in the form of imprints in the mud and left-over traces of food at feeding patches. Prior to 2019 in the rare times that we had observed interactions between chimpanzees and gorillas, they were considered as relatively relaxed, and we had even observed two encounters where both species fed peacefully in foraging trees.

The two lethal encounters of 2019 were significantly different to all interactions we had previously observed between the two sympatric species. The first encounter took place on 6 February 2019, when 27 members of the Rekambo community went on a deep intrusion patrol in the neighbouring chimpanzee territory. This group was followed by a research team comprised of four observers. The patrol lasted several hours and it was late afternoon when the Rekambo chimpanzees re-entered their territory after not encountering another chimpanzee community. It was here, in a large dense thicket that the encounter with the gorilla group took place.

The first indication that something was wrong was a loud high-pitched scream of a chimpanzee followed by a series of chimpanzee barks. Only a few seconds later the entire area became a cacophony of noise, and it was then that we heard chest beats - a characteristic display for gorillas - and realised that the chimpanzees had encountered a group of gorillas. This first encounter lasted about an hour (in which we could still hear the silverback's chest beats) and involved several male chimpanzees and adult females jumping on and hitting the large silverback. The silverback retaliated and one adolescent female chimpanzee was severely injured when she was knocked backwards after a charge. In the commotion the chimpanzees were able to capture an infant gorilla who eventually died after being roughly handled and played with by the younger chimps. The encounter ended with the gorilla group's ultimate retreat.

The second event took place in December 2019, just ten months after the first lethal encounter. A large party of chimpanzees were on the outskirts of their territory and a patrol into the neighbouring northern community's territory seemed imminent. A team of observers were following an adult male, Freddy, who suddenly stopped, became pilo-erect, and produced alarm barks whilst scanning the distance towards the edge of a swamp. The observers then saw movement in a large tree in the distance and identified an adult female gorilla in the canopy. Several chimpanzees began to climb up into the tree containing the gorillas, of which there were 7 individuals.

After a few minutes at least one female gorilla and the silverback were seen fleeing, leaving two adult females and their offspring in the tree. The chimpanzees focussed on these two females and moved closer to them in the canopy, eventually driving them to the ground where they harassed them and attempted to grab the infants from their bellies. Eventually one female managed to flee with her infant, however the other female lost her infant to the chimpanzees who had surrounded her. The gorilla infant died shortly after its capture and had a large opening across its abdomen.

Following the capture and death of the infant, the chimpanzees lost interest in the other members of the gorilla group and soon after the chest beats of the silverback were no longer heard. An adult female chimpanzee, Roxy, retrieved the infant gorilla and carried it with her for the next three hours, periodically feeding on it. There was not much interest from the rest of the chimpanzee group, although there were a few exchanges of meat between Roxy and several low-ranking individuals.

Discussion of the Events

Several explanations may account for these lethal encounters. We have discussed our observations, and indeed continue to do so, with other primatologists and anthropologists alike. One suggested explanation may be that the observed events represent cases of predation, with the chimpanzees hunting and opportunistically targeting the smaller-bodied gorilla infants as prey. However, firstly, since the consumption of the "prey" was only observed in one case, it does not fit the purpose of hunting as a means of gaining nutritional benefits. Secondly, the behaviour observed during the two events was very different to those reported during species-typical hunting, which is characterised by the prevalence of high-ranking males as the primary prey possessors and consumers, high levels of attention, arousal and excitement of party members after a kill and the presence of begging and food sharing behaviours (Boesch & Boesch 1989; Goodall 1986; Mitani & Watts 2001).

Another potential explanation is that the two cases are the product of interspecific competition. The two lethal encounters we observed occurred at times characterised by food scarcity and a period of high dietary overlap in Loango (for fruit resources) - February and December 2019 (Head et al. 2011), while the two previously observed peaceful co-feeding events took place in April, a month characterised by relatively low dietary overlap between the two species. These high levels of competition for specific fruit species in months of low fruit availability may spur higher levels of aggression when competing over valuable resources.

Additionally, one typical aspect of many interactions driven by interspecific competition is that the outcome favours species that form groups, as in this case where the chimpanzees were at an advantage even against the larger gorilla species, given their ability to cooperate and form a coalitionary attack.

A third and final potential explanation is that at Loango, due to this relatively high dietary food overlap in specific months (Head et al. 2011), the chimpanzees perceive gorillas as competitors, for both space and resource use, similar to members of other chimpanzee communities. Both of the lethal encounters reported here showed clear similarities to behaviours observed during chimpanzee intercommunity encounters given both events took place at the beginning or end of a territorial patrol, infants were targeted and adult males were the main attackers and played the most active roles.

Ultimately, at this point we can only speculate as to why these two lethal events took place. Additional observations of interactions between chimpanzees and gorillas, in combination with isochronous assessments of fruit availability and dietary overlap, are needed to fully understand if indeed these attacks are spurred by hunting, interspecies competition or whether they are merely a non-adaptive by-product of the territorial nature of chimpanzees.