Conservation and Management of the Itombwe Nature Reserve: Major Challenges 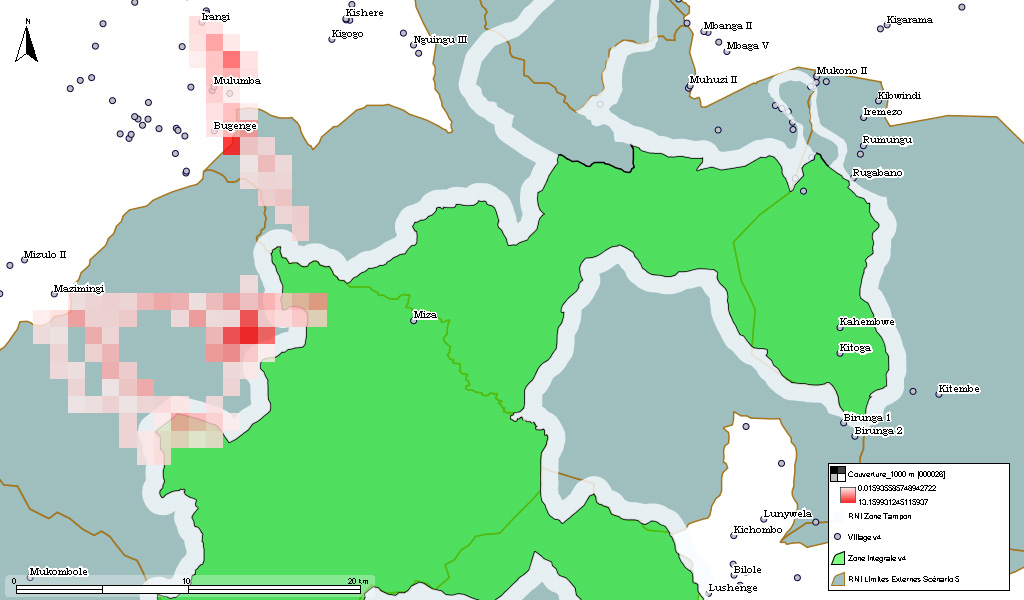 The Itombwe Nature Reserve (INR) is located in the eastern part of the Democratic Republic of the Congo in the province of South Kivu, west of Lake Tanganyika, in the Itombwe Massif. It is covered by a large tract of mountain forest. The existence of the INR and the recognition of its boundaries are governed by several documents, including Decree No. 01/008/CAB/GP-SK/98 of 25 February 1998 on measures for the protection of the fauna and flora of the Itombwe mountains, Ministerial Order No. 038/CAB/MIN/ECNEF/2006, which established the reserve, and Ministerial Order No. 16/026/GP/SK of 20 June 2016, which formalised the reserve boundaries, enclosing an estimated 5,732 km² (see also Gorilla Journal 57, December 2016).

The boundaries of the INR are quite clear-cut and do not cause much conflict with the local communities. 95 % of the boundaries are natural, mostly following watercourses. Half of the remainder has been marked with signs; only 2.5 % remain to be marked, requiring 59 signs.

The INR is subdivided into three management zones: an integral conservation zone, a buffer zone and a multiple-use zone.

The INR's administrative centre is a rented office in Mwenga. The INR is divided into 5 sectors, but only 2 sectors have a ranger post: the Mulambozi sector has a ranger post in the village of Kalundu and the Ulindi sector has a post in Kakolelwa. The other sectors, Elila, Mwana and Kiboyoka have no ranger posts or staff. PACEBCo built a multifunctional centre for the INR in Kamituga. It cost US$ 299,183.90, but ICCN has made no visible effort to manage it and it has since been abandoned.

The aim of the management of the INR is "participatory protection of the physical integrity of the INR in order to conserve its biodiversity, its ecosystem services and its cultural and socio-economic values while respecting gender dimensions and the rights of local residents and indigenous peoples, for the benefit of the local, national and international community."

The INR has a staff of 42. Of these, 23 are registered, i.e. they have a contract with the State. Of these 42 staff members, 28 are technical staff who work in the field, one is a scientist and 13 work in administration.

The low number of technical staff makes it impossible to patrol the entire reserve. Only parts of two sectors (Mulambozi and Ulindi) are monitored, particularly the multiple-use zone. During the first half of the year, only seven patrols were deployed, covering 6.7 % of the reserve. This low number of patrols is due to the lack of patrol food rations, field equipment and also to the reduced number of technical staff. Patrols during the first half of the year covered 0.36 % of the fully protected zone.

At the start of the second half year, in August and September, four patrols were conducted in the Mulambozi and Elila sectors. These four patrols covered 3.5 % of the total area of the reserve - 1.1 % were in the fully protected zone. This is an area where many illegal activities are observed, such as hunting with dogs and 12-gauge weapons, traps set by people digging for minerals, and several cassiterite quarries.

The management of the Itombwe Nature Reserve remains a challenge and deserves the attention of the international conservation comsmunity. Although placed under the management of the ICCN, protection and conservation remain unrealistic goals. According to international conservation standards, if all conditions are met (appropriate equipment, food and medical care) an eco-guard should be able to monitor an area of 15 km². The Itombwe Reserve is far from these numbers and this reality. The INR's 28 technical staff include curators and one deputy director. This means that the reserve actually has 25 eco-guards, with the capacity to monitor 375 km², which is 6.54 % of the reserve's total area of 5,732 km².

Note also that these eco-guards currently receive neither equipment, nor food while on patrol, nor health care from the Government. The meagre salary that a portion of the workforce receives may not even be enough to keep the staff working in the field. The INR has an old vehicle that cannot fulfil all its tasks in the reserve. Its maintenance costs are exorbitant and exceed the means of the reserve.

Two organisations currently support the INR directly. Berggorilla & Regenwald Direkthilfe provides the rent for the Mwenga office and gives bonuses in order to improve the life of the eco-guards and to allow them to remain in the field. The Gorilla Organization provides additional bonuses and occasionally funds for food while on patrol. Local and national organisations facilitate sensitisation, socio-economic surveys, the training of community guards, participatory demarcation and development projects.

The Government is requested to implement the following six actions in order to improve the management of the reserve: