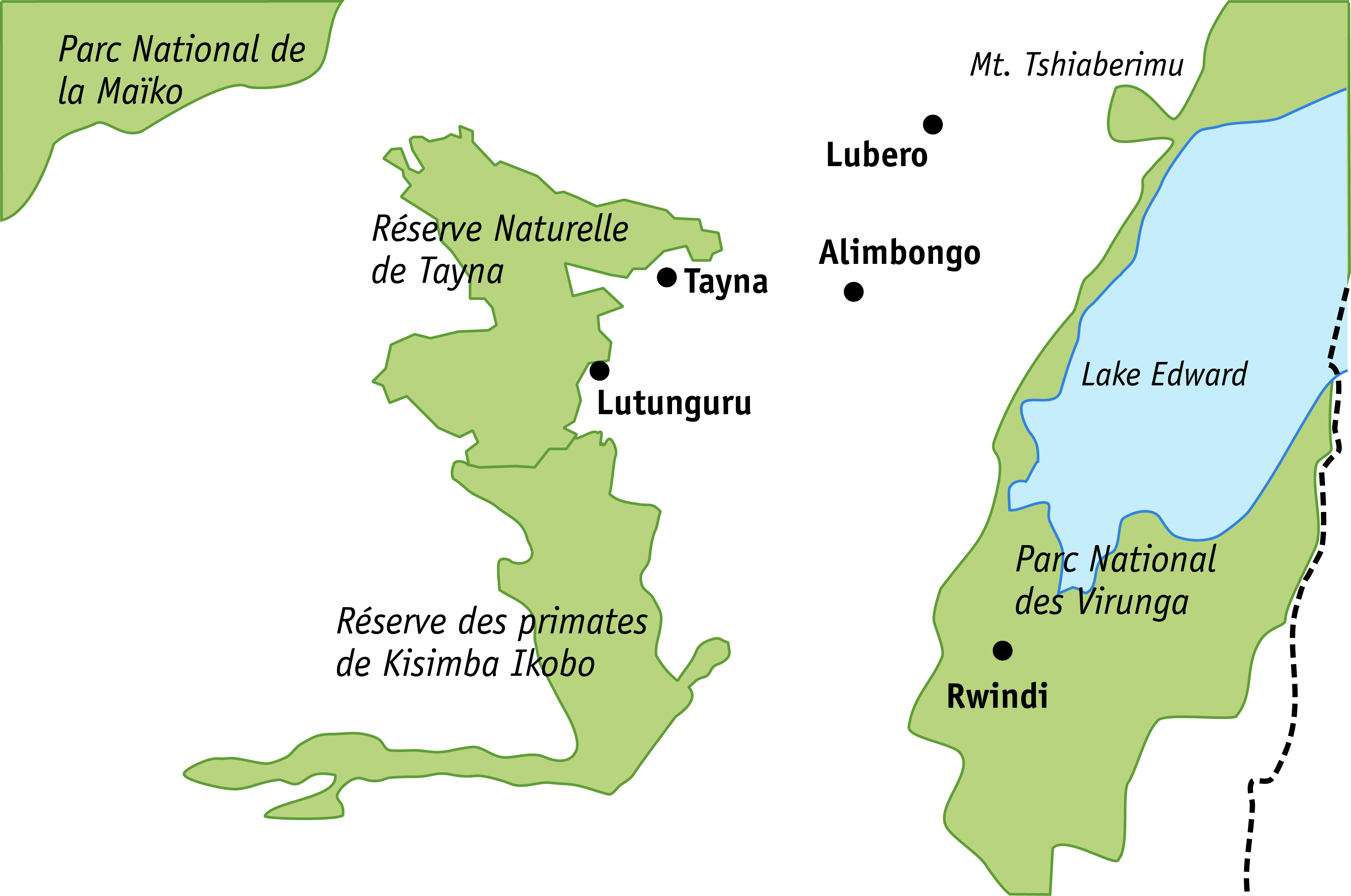 Map of the Tayna Reserve and surrounding protected areas (© Angela Meder, based on a map provided by GRACE)

In 2021, GRACE completed the first-ever great ape survey of the entire Tayna Nature Reserve, in eastern Democratic Republic of the Congo (DRC). How did GRACE achieve this? Not alone. Success meant working hand-in-hand with local communities, including:

The Tayna Nature Reserve is situated within a transition zone between the lowland forests of the Congo Basin to the west and the highlands of the Albertine Rift to the east. The undulating terrain ranges from 850 to 1,850 m in altitude. In addition to Grauer's gorillas, Tayna is home to eastern chimpanzees, pangolins, leopards, and many species found only in this area of the world; the Albertine Rift biodiversity hotspot, an important area in the region for species diversity and endemism. It is also an important upland water shed, regulating water flows in the region.

In the lead up to the fieldwork for the survey, GRACE used satellite imagery to assess the state of the forest habitat within Tayna. This revealed relatively intact forest within the reserve boundaries, with a 1.57 % forest loss between 2000 and 2018, but also extensive deforestation in the more highly populated areas to the east of the reserve.

A Reserve Created and Managed by the Community

Tayna Nature Reserve was created from land donated by community members. Unlike a national park managed by the government, it is managed by the community. Beginning in the late 1990s, traditional and community leaders led an effort to protect the Tayna area. Their goal was to prevent the loss of local forests, wildlife, and sacred cultural sites to commercial cattle ranchers and agricultural settlements that were creeping westward.

Despite war in eastern DRC in the late 1990s and early 2000s, community leaders kept the idea of the reserve alive. In 2001, 21 Barazas (families of traditional landowners) donated land to create the reserve. A local association, La Réserve des Gorilles de Tayna (RGT), was created to manage the reserve. In 2006, the land was officially declared the Tayna Nature Reserve by DR Congo's government. It was now completely protected under Congolese law.

Today, GRACE (Gorilla Rehabilitation and Conservation Education) is the only international conservation NGO active in the Tayna area. Working in this remote area comes with challenges, including insecurity and disease outbreaks. While the GRACE sanctuary is dedicated to caring for orphaned Grauer's gorillas, GRACE has taken an active approach in protecting gorillas and their habitat. We do this through conservation education in local communities. Over the years, GRACE has built strong ties with local communities and traditional leaders. As a result, GRACE has become a trusted and valued partner. This history gives GRACE a unique insight into the challenges and opportunities for conservation in the region. Insight that was critical during the great ape survey.

Community Meeting to Start the Survey

For the survey to be successful, open communication and close involvement of local communities were essential. To kick off this collaboration, GRACE and RGT - the management team for the reserve, elected by locals - convened a formal community meeting. The meeting included:

During the meeting, GRACE DRC Director Jackson Kabuyaya Mbeke presented plans for the survey. Furthermore, he outlined steps for GRACE to train and hire 25 community members for the research. At the end of the meeting, all participants signed a statement agreeing to the terms of the project and pledging their support for the survey.

Just weeks after the community meeting, the World Health Organization declared the novel coronavirus outbreak a global pandemic. Survey plans called for GRACE Science Advisor Damien Caillaud to visit GRACE in May 2020 to train survey field teams. With travel shut down, this was no longer possible.

Fear grew that delaying the survey any longer might result in the community abandoning the projectand disengaging from conservation. The survey would be the first major conservation project in nearly a decade. It would also be the first return of financial support for conservation in a poverty-stricken area.

Rather than risk the project falling apart, GRACE and partners pivoted to remote training of the field teams - with training videos and a 15-day training of 5 field teams.

Tayna is a remote and heavily forested area with no roadways. Teams travelled on foot through the rugged terrain. Supplies had to be carried in and out by porters, up steep hills and across rivers. In addition, strict COVID protocols meant team members could not return home to their families until the survey was finished. With no cell or radio communication also being possible, the teams were truly on their own in the forest.

The five survey teams covering the 900 km² reserve used a modified "fast transect" method. Throughout the survey, teams also collected data about human activities using the same methods. These included snares and other traps, gun shells, and signs of logging and cultivation.

The great ape survey took 70 days to complete, with 5 teams each with one team leader, 4 trackers and additional porters and cooks. In that time, teams found:

The survey pulled back the curtain on Tayna's great ape populations. It confirmed that Grauer's gorillas and eastern chimpanzees still survive in Tayna.

Baraza members and RGT staff with GRACE DRC Director (third from left) at the community meeting to announce the start the survey.

Gorillas are Still in Crisis

The great ape survey confirmed that Grauer's gorillas and eastern chimpanzees have not disappeared from Tayna. But it also identified ongoing threats to their populations, including mining, hunting, and cultivation.

People living in this area are among the poorest in the world. Many depend on subsistence agriculture. They depend on the forest and its resources for their livelihoods. Continued human population growth and pressures from urban areas to the east risk exacerbating this problem. And the economic impact of the Ebola outbreak (2018-2020) - which came 15 km close to GRACE - and COVID-19 only add to the dangers.

At the same time, the community is the reason Tayna Nature Reserve exists in the first place. And the great ape survey makes clear that the community can accomplish major conservation feats if they are supported.

GRACE is now working to re-establish ongoing gorilla monitoring efforts in the reserve. We continue to work with the Tayna community leaders to build capacity. The great ape survey is a major achievement to celebrate. But together, we need to continue to support community-led conservation of Tayna to protect gorillas, chimpanzees, and their forest home in one of the most biologically diverse areas on the planet.

Summary of the GRACE blog and report

About GRACE
Gorilla Rehabilitation and Conservation Education (GRACE) Center is an NGO that operates the sanctuary for Grauer's gorillas in Eastern Democratic Republic of the Congo (DRC). The largest primate in the world, Grauer's gorillas only live in war-torn eastern DRC. GRACE cares for 14 orphaned gorillas rescued from poachers and works to rehabilitate them so they can one day return to the wild. At GRACE, the gorillas live in a single gorilla group that functions as a surrogate family and spend their days in protected forest habitats. GRACE also leads field research and partners with local communities on education and conservation initiatives to protect a critical population of wild gorillas living in Tayna Nature Reserve. For more about GRACE, visit gracegorillas.org.