Signs of Success in Sarambwe 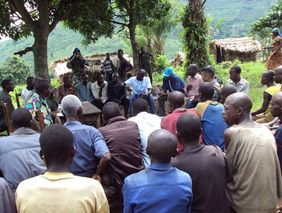 Discussion between the population, VONA, ICCN and MONUSCO in Satambwe (© Claude Sikubwabo)

Conservation of the Sarambwe Reserve has faced many difficulties for many years: security problems, invasions of foreign nationals, and a lack of funds, equipment and infrastructure. Activities of international conservation NGOs and the presence of rangers and other dedicated ICCN staff have all helped the reserve to make it through the hard years since 1995 in reasonably good shape. Clear progress is now being made in the stabilisation of the reserve, and lost areas may be recovered in the near future.

A whole series of events has contributed to the stabilisation of the reserve. The key event seems to have been a workshop on the sustainable and integrated management of the Sarambwe Reserve held in May 2010. Participants included the WWF-Virunga Environmental Programme and the International Gorilla Conservation Programme (IGCP). The workshop was financed by the Berggorilla & Regenwald Direkthilfe (B&RD), and was part of a series of activities undertaken by VONA (Voix de la Nature, Voice of Nature) in and around the reserve and jointly financed by the French Committee of the IUCN and the B&RD. The workshop brought all stakeholders together to sit down at the same table: from the reserve and from the surrounding region. This included representatives of the local administration, traditional chiefs, farmers' leaders, representatives of local associations, the Pygmies, the state services at the territorial level, and the local media. The topics that were discussed during the workshop were as follows:

After presentations and discussions on all these subjects, three working groups were formed to

The workshop ended with the formulation of recommendations to the committee, the provincial authorities, the ICCN and VONA. These included the establishment of a county committee whose roles will be to

To conclude the workshop, a final statement was made and distributed to local radio stations; an interview with the VONA coordinator was also broadcast. This statement triggered a great deal of interest and reactions. For example:

The Mwami (local chief) sent letters to the military authorities and to development actors requesting that efforts to improve the situation in the Sarambwe Reserve be initiated.
To implement the workshop recommendations, IGCP and ICCN organized a meeting between the staff of Bwindi Impenetrable Forest National Park, members of the Ugandan and the Congolese armies stationed on the borders of Bwindi and Sarambwe, and the politico-military authorities of the Democratic Republic of the Congo stationed close to the international border. Measures were put into place to monitor the situation and to put an end to future invasions of the reserve.

Current Status and Recommendations
At the moment, the situation regarding the fields cultivated by the Ugandans in the reserve is being addressed. When the first encroachment of the reserve took place, the Ugandans were being supported by certain military commanders, and thus the Sarambwe patrol rangers were unable to take any action. Now, the Ugandans flee when they see the Sarambwe rangers. To show goodwill and not to strain cross-border relations, the encroachers were given a period of 3 months to harvest their crops. The county committee continues to lobby for the reserve and to raise funds for the implementation of activities. It is important that rigorous follow-up activities are conducted and that support is provided to the rangers and the committee to maintain their activities.