Educational Activities in the Republic of Congo 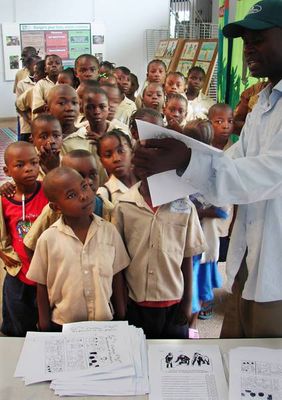 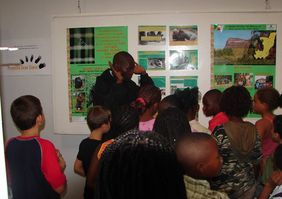 Following on from its success with gorilla reintroductions and protected area management, the PPG (Projet Protection des Gorilles)-Congo has recently launched a large-scale education project. This project will play a major role in the fight against the illegal trafficking of great apes and in educating the local people living in communities that border on the Lésio-Louna Reserve, where the gorilla reintroduction project is having continued success.
Based on the success of the educational initiatives run by the PPG-Congo since 2006, these programs will be further developed and implemented in 2008.

General Educational Initiatives
PPG-Congo runs two major education programs in the region around the Lésio-Louna reserve. The first is a series of awareness campaigns for people living in the outlying regions of the reserve, aimed at facilitating communication and encouraging participative management of the reserve by local people. The second initiative that has recently been developed is an educational program in Brazzaville. A small-scale program at the outset, with insufficient financial resources, it has steadily grown as it has received increased support.
The first campaign was the support of a local NGO called the APPC (Association for the Protection of Primates in Congo) through the implementation of educational activities within the Brazzaville Zoo. Training programs for APPC educators were financed by the Aspinall Foundation, and this initiative permitted trained staff to communicate their message to nearly 500 individuals over the course of 2007.
In addition, educational programs were developed within two schools in Brazzaville and seven schools located in the outlying areas of the Lésio-Louna Reserve. These programs reached 439 students in Brazzaville and 552 students in the reserve area. Student participation in these activities was encouraged through the use of various educational display panels, films and theatrical plays.
Finally, within Brazzaville a series of posters was mounted in key areas around the city, highlighting the protection laws regarding great apes and the ban that prohibits killing, owning, selling, purchasing or consuming great apes.

Conference-exhibition on Great Apes
The key event of 2007 was undeniably the expo-conference held from 11 to 26 May at the Brazzaville French Cultural Centre.
This event, organized by the French Embassy, the Ministry of Economic Forestry, the Aspinall Foundation, the Jane Goodall Institute and GRASP-Congo, gathered together all the Congolese NGOs concerned with great ape conservation, such as the WCS (Wildlife Conservation Society) and the HELP-Congo project (Habitat, Ecologie, Liberté des Primates), as well as the Lola ya Bonobo sanctuary of Kinshasa. Special mention must also go to the director of the NGO LAGA, renowned for wildlife law reinforcement actions in Cameroon, who generously accepted our invitation to share his experience with the Congolese authorities.
The exhibition focused on great apes' ecology, their common ancestry with humans, the national and international legislation that protects them, and the numerous threats to their survival. This last aspect was of particular interest to visitors as it detailed the progressive decrease of great ape numbers as a result of commercial hunting, habitat destruction and disease epidemics.
Almost 1300 people visited this exhibition, at an average rate of 120 people per day. Among the visitors there were 770 pupils from 16 primary schools, who were given a guided tour of the displays and activities.
The conference held on the 18th May included many presentations and films. Invited guests included many high profile state representatives involved with great ape conservation, such as police, customs and legal officers.

National Media (Radio and Television)
In the interests of educating and in-forming the Congolese population on a more national level, a radio announcement that highlights the importance of great apes and their status as protected species is broadcast on national radio twice a week in three different languages. This initiative will continue throughout 2008, and in all likelihood will continue into the foreseeable future.
In addition to the radio broadcast, there are 4 films that are regularly shown on television. These programs - produced by the national channel TV-Congo - showcase the activities connected with gorilla reintroduction, the management of the Lésio-Louna Reserve, the protected status of great apes, and the issues associated with the trafficking of these species.

Educating Rural Development Students
An awareness campaign aimed at students of the Rural Development Institute (IDR) was implemented at the Marien Ngouabi University. A total of 63 students participated in this educational program and were taught about great ape ecology and their importance, as well as the national and international wildlife laws that protect them.
Following on from the success of this venture, the University has voiced its interest in setting up this program in a range of faculties. At present the Science faculty and Law faculty are ready to implement the project.

Collaborating with the National Police Force
On 25 February 2008, 300 newly trained police officers received a complete training program on great ape legislation and their status as protected species. This included general information on great apes, and various case studies of trafficking that have occurred in Central Africa (thanks to information supplied by LAGA), and officers were able to learn more about this branch of criminal activity as it applies to all flora and fauna, and to great apes in particular. Two films discussing the role of the PPG-Congo were shown, as well as a theatrical play by the ACPF (Association for the Culture of Protection of Flora and Fauna).
This initiative was made possible through the support of the French Embassy and a cooperative project for Congolese police training. An additional 300 officers will also be able to undergo the same training around June 2008. The PPG will maintain its links with the national police force for possible future training events, particularly for high-ranking officers.

Conference for Lawyers
About 60 people working in the practical application of legislation in the Republic of Congo, especially high-ranking magistrates, attended a course on the theme of "The law, a tool for the protection of wildlife". Three talks were presented, showing the difficulties as well as the opportunities connected with wildlife law enforcement in Central Africa. It was particularly important that the president of LAGA had come to discuss the transfer to Congo of this NGO's successful experiences in Cameroon. WCS and a representative of the Lusaka Agreement also took part. This event was followed up by special investigations, leading to the first arrest and arraignment of an ivory dealer. The activities of several great ape dealers are also under investigation, and they may be brought to justice in the near future.