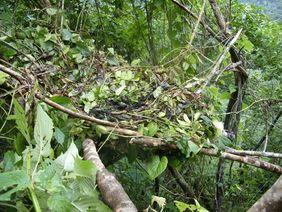 Mawambi is a 43 km² lowland forest site, also known as Takpe/Awuri, located to the southeast of the Takamanda National Park in Cameroon. The Ma­wambi gorilla research project was launched in November 2009 with the aim of obtaining baseline information on the population size, feeding and ranging ecology, and anthropogenic disturbance of a Cross River gorilla sub­population inhabiting this unclassified forest. During a total of 297 field days, spanning 23 months, we have documented the diet and ranging behaviour of these gorillas, investigated the intensity and spatial distribution of human activities within the forest, and evaluated the vulnerability of gorillas to human disturbance.

Due to Mawambi’s lower altitude and proximity to village communities, the forest is intensively used by local people for hunting, lumbering, and non-timber forest product collection. According to village reports gorillas and chimpanzees have been hunted heavily at Mawambi in the past. The last gorilla hunting incident was in 1998 when an adult male was reportedly killed by a hunter from Takpe village. Hunting has subsided ever since as a result of increased conservation efforts, mainly by WCS, but rapidly increasing anthropogenic disturbance threatens to undermine these conservation efforts. We have found that Mawambi gorillas mainly occupied the slopes of steep hills and avoided human disturbed areas. A measure of the spatial congruence between human activity and gorilla signs also revealed a high human pressure on the core areas used by gorillas.

Here we report on the use of trees in nest construction by Mawambi gorillas. Knowledge of plant species used for nesting by gorillas is important because it can lead to the designation of suitable habitats. Identifying and protecting trees used for nesting has also been recommended as a practical approach to reduce the negative impacts of logging on great apes (Sanz et al. 2007).

We examined 163 nest sites to determine the rate of tree nest construction and their choice of tree for nesting. Typically, nests are constructed in trees by breaking, bending, and inter-weaving branches from the same or neighbouring trees to form a solid platform and then lining it with smaller branches, twigs and leaves in a circular fashion until it is comfortable to sleep in (Fruth and Hohmann 1996). For each nest built in trees, we recorded 1) species of tree, 2) height and DBH (diameter at breast height) of trees in which they nested, and 3) height of nest from the ground.

To determine whether gorillas were selective in their choice of nesting trees, the density and abundance of gorilla nesting tree species were obtained in a habitat-wide vegetation ­census.

Gorillas nested in 98 tree species from 19 families, and in 10 identified understory tree species. Seventy-two per cent (72%) of tree nests were built in trees from five families (Euphorbiaceae, Leguminosae, Anacardiaceae, Sapindaceae, and Olacaceae). Density estimates were calculated for 35 (out of 98) nesting tree species recorded in the vegetation survey. For these 35 species, we found no relationship between tree density within the study area and the frequency of nests built in each tree species. Also, the frequency of nests built in a tree species was not related to the mean DBH (> 10 cm) of the species. The mean DBH of nesting tree species was 27.5 cm (median = 25.3). Gorillas preferred small to medium sized trees in the understory or middle story of lowland forests such as Baphia nitida and Strombosia grandiflora, and small trees growing on open rocky areas, e.g. Mallutos sp., Lannea spp., and Chytranthus sp. Because density data were available for only 35 of the 98 (35.7%) nesting tree species, these findings should be considered preliminary.

At Mawambi Hills, the size and abundance of particular species did not significantly influence their selection for nesting. However, trees ≤ 29 cm DBH and < 13 m above the ground were mostly used for nesting. These two factors are not mutually exclusive as larger trees are also taller. Most nests were located close to the top of nesting trees; possibly to increase exposure to the early morning sun as has been suggested to be the case in chimpanzees (Baldwin et al. 1981). At Mawambi Hills, selective use was attributed to a few species, as the top 12 species were used for 65% of tree nests vs. 10 species for 13% of gorilla nests in Goualougo forest (Sanz et al. 2007).

Although gorillas ate fruits and/or leaves from 74% of nesting trees, it could not be established that availability of edible fruits or leaves was the overriding factor in nesting tree selection given that we did not inspect whether or not nesting trees were used for food at the time that nests were built on them. Instead, the choice of nesting trees seems to be influenced by their presence in the nesting environment rather than the tree species per se (Rothman et al. 2006). When nesting in lowland forest with large trees and closed canopy, Mawambi Hills gorillas preferred small to medium sized trees in the middlestory such as Baphia nitida, Strombosia grandiflora and Treculia obovoidea. While nesting in rocky and hilly places with shorter and smaller trees and more open canopy, strong woody understory trees that grow in rocky areas such as Chytranthus spp., Lannea spp. and Mallutos spp. were preferred. In addition to their presence in the nesting environment, preference of these particular tree species might relate to structural features that make them secure and comfortable such as height, strength, fibrousness, maturity and crown structure (Anderson 2000; Stanford & O'Malley 2008).

This paper reports for the first timeon the trees in which Cross River gorillas built their nests. It is however, important to catalogue the structural and architectural characteristics of trees used for nesting, as these have been predicted to be a key factor in determining nest tree choice in great apes.