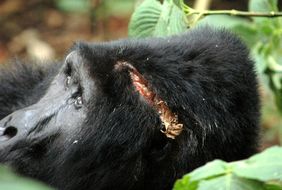 When powerful silverbacks jostle for dominance within a group, they can sustain very serious injuries with their long canine teeth. Over the last 30 years, Gorilla Doctors field veterinarians have watched these impressive males make miraculous recoveries, many times without the need of veterinary intervention. After an interaction, if any gorillas are wounded, our field vets will return to the group again and again to assess the injuries, deliver medical treatment if necessary, and ensure the gorillas recover fully.

Recently, an intra-group interaction between silverbacks Kakono and Rurehuka in Bwindi Impenetrable National Park's Bweza group occurred. The interaction left dominant silverback Kakono with two wounds on his head and second ranking silverback Rurehuka with superficial wounds on his back. Gorilla Doctors Uganda Field Veterinarian Dr. Fred Nizeyimana first trekked to the group with UWA rangers to assess the silverbacks' wounds and found the ten members of the group calmly feeding on Mimulopsis and tree ferns. It was a cold, clear morning in Bwindi and the silverbacks fed from the ground while the other group members took to the trees.

Even with subordinate silverbacks recently challenging his dominance, Dr. Fred reported that group leader Kakono was fully in charge of the group. Second ranking silverback Rurehuka and young silverback Mucunguzi attempted to move close to the three females of the group during Dr. Fred's observation, sparking bouts of loud vocalizations while they chased one another away. Meanwhile, blackback Tindatine stayed on the periphery of the group, avoiding the fray. During Dr. Fred's initial assessment following the intervention, dominant silverback Kakono had two large wounds on his head, one on his shoulder and one on his left wrist. All of his wounds were clean and showing signs of healing, though the more serious laceration on his head would require further assessment. Rurehuka's wound on his back was small and already showing signs of healing.

When silverbacks are injured by their conspecifics, it most frequently occurs when a subordinate silverback challenges the lead male. In the last five years in the Democratic Republic of the Congo (DRC), Gorilla Doctors Head DRC Field Vet Eddy Kambale has reported multiple cases involving silverbacks injured through fighting for dominance. These dominance struggles have resulted in the split of many habituated mountain and Grauer's gorilla groups in Congo.

For example, in Virunga National Park's Kabirizi group, young silverback Bageni was regularly interacting with the dominant silverback of the group, Kabirizi. Bageni's health began to suffer from stress and frequent fighting and he began to lose weight and seemed to age exponentially. Fortunately, a few months later, Kabirizi began allowing young silverback Bageni to have control of some of the group members and finally the group split completely in February 2013: Bageni took 20 of the 36 group members with him, including the vast majority of the females. Bageni group has since grown to 29 gorillas, a great indicator of Bageni's success as a group leader and father.

Over the years, Gorilla Doctors field veterinarians have monitored and treated silverbacks with injuries ranging from deep bite wounds and lacerations to broken limbs. Time and time again, the silverback's remarkable healing power is made evident. But sadly, there have been occasional cases of silverbacks succumbing to their injuries, despite Gorilla Doctors' best efforts to save their lives through medical intervention.

In 2012, a Grauer's gorilla silverback named Langa in Kahuzi Biega National Park interacted with another Grauer's silverback, Ganywamulume. Langa was an older silverback with a deformed left leg and he was severely wounded in the interaction. When Drs. Eddy, Martin and Jacques intervened to administer intravenous fluids, antibiotics and anti-inflammatory and pain medications, they saw a multitude of scars from years of fighting on the old silverback. Despite the medical intervention, Langa succumbed to his wounds and trackers created a stretcher to carry the silverback out of the forest for necropsy.

Another sad silverback loss occurred in July 2011, when young silverback Jeshi was seriously injured after interacting with two solitary silverbacks: young silverback Mukunda and older silverback Karateka. "These two silverbacks attacked the Kabirizi group trying to steal some of the group members and Jeshi was the one who stayed behind to fight them while the rest of the group fled" said Dr. Eddy. During this time, the M23 rebel group was occupying the Mikeno Sector of Virunga National Park, but Gorilla Doctors DRC Field Vet Dr. Martin and ICCN rangers were able to reach Jeshi to intervene. Jeshi had been badly bitten by silverback Mukunda in the interaction and had deep, infected lacerations on his knees, thighs and left foot. Despite the medical intervention, Jeshi died on July 10, 2011.

Gorilla Doctors only intervenes when an injury or illness is either human-induced (e.g. a poacher's snare) or life-threatening. A medical intervention can cause considerable stress within the group, and if the gorilla can heal on its own, our veterinarians would like to allow that to happen. Rwanda Field Vet Dr. Noel estimates that Gorilla Doctors observes roughly ten cases of injured silverbacks in a year, with only one or two considered "life-threatening" and thus, requiring medical treatment.

The lives of silverbacks and blackbacks are often marked by violence as male gorillas struggle to maintain power or overthrow others. This natural gorilla behaviour will continue to occur and our field veterinarians remain at the ready to intervene in life-threatening cases, in the hopes of preventing the loss of these magnificent silverbacks.