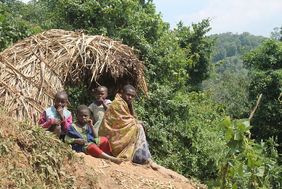 Mountain gorillas of Bwindi Impenetra­ble National Park, Uganda, live in one of the poorest regions of Africa. This creates a major challenge for Uganda to conserve Bwindi's gorillas in a way that improves the livelihoods of local people. The Integrated Conservation and Development (ICD) approach for national park management was adopted to overcome this challenge. ICD initiatives are based on the premise that conservation is achieved by addressing local development priorities. At Bwindi they included the funding of "common good" projects such as schools and roads from a portion of tourism revenue, and supporting agriculture and health improvements. These initiatives have been key for park authorities to improve relations with local communities. But more than 20 years later, they have had little impact on bushmeat poaching, encroachment of communities on park land and other illegal activities that threaten Bwindi’s gorillas.

In 2012, the International Institute for Environment and Development (IIED) partnered with leading re­search, conservation, and advocacy or­gani­zations in Uganda for a combined research and advocacy project at Bwindi. IIED's partners were the Institu­te of Tropical Forest Conservation, the Jane Goodall Institute-Uganda, and Advocates Coalition for Development and Environment. Additional support was provided by Imperial College London and Parsons Brinckerhoff, and the project was funded by the Darwin Initiative and UKaid.

The team developed a research framework to understand who continues to use Bwindi's resources illegally despite ICD, and why. They designed household surveys with indirect questioning to allow citizens to discuss illegal activities without incriminating themselves, and focus group discussions to explore the opinions of community leaders and specialist community groups. The research was completed in 2013 and generated the following findings:

Who are the poorest of the poor?

The poorest people live in the "frontline zone", extending about 0.5 km from Bwindi's boundary where crops and livestock are frequently raided by wild animals. They are at greater risk of disease because they have fewer sanitation facilities. They have less education, making it harder to find work, and they live far from the trading centres and transport which others within their community benefit from. All this perpetuates a continuing poverty trap.

Do they benefit from ICD projects?

Some ICD benefits are reaching people in the frontline zone. But few or no ICD benefits are reaching the poorest people living there. The poorest people also feel less involved with decision-making and less ownership of ICD projects. From investigating why this was so, it appeared that most ICD projects occur near trading centres and roads, but not in remote areas where the negative social impacts of conservation are often greater, and people are poorer.

Who uses Bwindi's resources illegally, and why?

People who have been arrested for illegal resource use were generally poorer than other local residents and lived close to the national park and far from trading centres - suggesting poverty is the major issue. But not everyone undertaking illegal activities is arrested, so the team explored further.

Bushmeat is the forest resource that local people of Bwindi want and consume the most. Bushmeat hunters often live in remote areas and the frontline zone. Many hunt because they cannot afford meat or livestock, or seek bushmeat for medicinal needs. So again, the evidence points to poverty. But then there are hunters who are not the poorest in their community. These included traditional hunters who sold bushmeat locally for a small, modest income. But also others who hunted not from necessity or income, but because they feel the national park's conservation has treated them unjustly. These individuals hunted to compensate themselves for the crops and livestock taken by wild animals. As one of our focus groups explained,

"the present management is not controlling the problem of crop raiding animals, which makes people angry so they go into the forest."

They also hunted because they feel that jobs with the national park and related tourism operations go to outsiders, and that ICD projects fail to benefit people suffering because of the national park. Another focus group told us,

"people are angered by the giving of goats; those receiving goats are not living near the park, so we are angry and go to the park and poach."

These feelings of inequity over national park conservation were as important a driver of hunting (and other illegal activities) as rural poverty.

Equity Is a Necessity

The team's report, Linking Con­ser­vation, Equity and Poverty Alle­viation, was published in August 2014. When presenting the research findings at workshops to Ugandan policy makers and conservation practitioners, the team focussed on the critical need for equitable management of protected areas. But what does equitable pro­tected area management look like? The Uganda Conservation and Poverty Learning Group members (U-PCLG) took on this challenge and, for the second stage of the project, are advocating for key outcomes from ICD - greater equity in tourism revenue sharing, more national park-related jobs filled by local people, reduced human-wildlife conflict and better access to sustainable resource use - all with a strong emphasis on de­livering benefits to people in front-line communities who are experiencing more of the burden (i.e. costs) of conservation.

Around Bwindi, this research and U-PCLG's advocacy activities are helping ICD interventions - through a specific focus on equity - become more effective in both conservation and poverty alleviation. At the international level they support wider developments for equity within conservation by illustrating that equity is not only a moral obligation, but a necessity for gorilla and indeed other conservation programmes to be effective and sustainable.

IIED is an international organization that conducts action-oriented research and forms local partnerships to advocate for fair and sustainable use of natural resources.