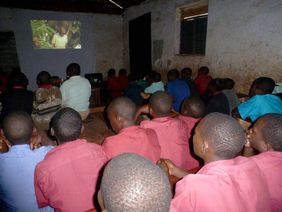 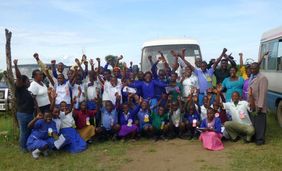 Proud to be a great ape superhero (© Michelle A. Slavin/NC Zoo UNITE)

Conservation education acts as a bridge between researchers and com­munity members by taking research and turning it into fun and engaging information that inspires action. Un­fortunately given limited time, funding and available resources, creating a successful conservation education pro­gram can be challenging. One way to mitigate these challenges is the use of conservation films that address conservation topics specific to a re­gion, incorporating culture and local language.

The Great Ape Education Project (GAEP) in Uganda is designed to educate children and rural communities about the threats to great apes: habitat loss, snaring and bushmeat. A collaboration of three well-established Uganda-based organisations - the North Carolina Zoo's UNITE for the Environment (UNITE) program, the Kasiisi Project, the Max Planck Institute for Evolutionary Anthropology (MPI-EVAN) and the Dutch NGO Nature for Kids (NfK) - the project has developed and distributed a series of 3 ape-focused conservation films and a range of supporting educational materials (student magazines, posters and brochures) and programs designed to be accessible to local people and which are sensitive to cultural beliefs and traditions. The project has been underway since 2012 and impacts communities surrounding two thirds of Uganda’s chimpanzee population and almost half of the world’s mountain gorillas.

The focus of GAEP is educational outreach relevant to the conservation of the great apes. Providing students, teachers and community members with an effective and compelling way to learn more about great apes will allow them to better understand how human behaviour, the survival of great apes, and the environment which they all share are closely linked. Through innovative educational outreach, and by providing conservation solutions that individual rural people can undertake, GAEP promotes both attitudinal and behavioural change to secure the survival of great apes in Uganda. A key strength of GAEP is the long-term involvement of the participating organisations in great ape conservation. Each of our organisations has worked both individually and collaboratively for many years in Uganda, employing a range of diverse yet complementary approaches to conservation education. By fostering positive attitudes towards apes and ape conservation GAEP helps to ensure the long-term survival of these critically endangered species.

Films developed as part of this program were created with input from great ape experts and Ugandans who provided cultural advice for the story lines. The films are made particularly relevant to the communities in which we work, because they were shot on location in Uganda using local actors. Our extensive experience with conservation education, the broad range of expertise of our staffs, and the use of tailor-made conservation films makes this project unique among ape conservation initiatives in Uganda, even among initiatives in other African great ape countries. While the films were made in Uganda they are general enough to be used in all African ape range countries.

To date, UNITE staff have trained 100 teachers working in 33 primary schools, 5 Uganda Wildlife Authority (UWA) rangers and 2 UWA Community Conservation Wardens during 3 three-day teacher trainings. Teachers and UWA staff were trained how to use the films as an educational tool in schools and each school developed an outreach plan appropriate for their community and schools. The plans include showing the movies as well as implementing great ape themed activities to enhance the films' key messages. By training teachers to use the films and carry out supporting activities for their students, GAEP has been able to reach approximately 16,000 students surrounding Kibale and Bwindi Impenetrable National Parks.

The response to the films has been overwhelmingly positive. Students in the 33 schools were able to relate to the films because the characters look like them, talk like them and face the same conservation challenges as them. Students frequently cheered on the main characters, Ajani and Nantale, encouraging them to do the right thing and save the great apes found in their communities. The film’s key messages were very clear: chimpanzees and gorillas are similar to humans in the way they look as well as in the way they feel and communicate; poaching is indiscriminate and dangerous; and of course, eating bushmeat is also very dangerous as humans can contract certain diseases from the meat. Despite living near world renowned great ape habitats, most students have never seen these animals and the films provided students their first opportunity to see a great ape. Student magazines, posters and brochures, created as part of GAEP, were given out after each film showing and have been a great way for students to share with their parents and grandparents what they learned at school and create a space for dialogue about great apes in Uganda.

After the film showings students were excited to take part in the activities their teachers had chosen at their training. The teachers had been given a list of great ape-themed activities and asked to choose at least two activities for each film showing that would best suit their school needs. For example, for some very rural schools creating a community garden was more feasible than doing a radio broadcast, while others chose to focus on expanding awareness about great ape conservation through newsletters or dances. In total each school chose at least six activities to be completed during the lifetime of the project, and some very motivated schools chose to do more. Schools chose a variety of activities to implement including making posters, art projects, building keyhole gardens (gardens designed to maximize small plots of land), forest walks and showing other great ape films. In the last two years, schools have completed three great ape-themed sporting events for netball and football, two radio broadcasts, 22 keyhole gardens and more posters in trading centers than we can count. But by far, the most popular outreach activity was debates - Ugandans love to debate! Of 21 debates conducted, topics have included: "Population in Uganda has affected the great apes’ survival", "Great apes are our relatives and should not be snared", "Should we protect great apes in zoos or forests?"

The Great Ape Education Project has not only provided both teachers and students with the opportunity to learn about the great apes they live so near but know so little about, but also to take pride in their country's wildlife. By using NfK's "edutainment" model (films + resource materials + activities) the great ape films are far more powerful than they would have been alone. The great ape-themed activities emphasize the key messages found in the films, allowing students to more deeply explore the conservation threats to chimpanzees and mountain gorillas. Given that the standard teaching practice in Uganda is lecturing, this program's focus on inquiry-based teaching methods and student-led projects has also helped to improve teaching practices, and has been both challenging and exciting for the teachers who are implementing it.

The project has not stopped with the schools: in 2013 all three organisations showed the films to community members in order to reach a wider audience and are planning more community film shows for 2014. Additionally GAEP staff has been able to share information about GAEP at special events such as the Zoos and Aquariums Committing to Conservation (ZACC) conference in the US, the Gorillas Across Africa Workshop in Rwanda and Ugandan Earth Day events in 2012 and 2013.

Personally, it has been wonderful to walk around the villages where GAEP schools are located and see students on bicycles wearing chimpanzee masks, waste management and anti-snaring posters in trading centers, and meeting school children in hiking areas who ask my opinion about the need for conservation of great apes. These films have created a sense of pride in local wildlife, particularly great apes, and have motivated and inspired students to conserve the great apes found in their national parks - which is exactly what Africa’s great apes need.