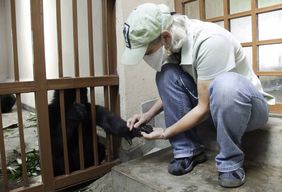 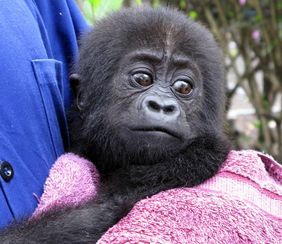 On November 23, 2010, 9-year-old female Maisha and 7-year-old male Kaboko moved from the Mountain Gorilla Veterinary Project's (MGVP) orphan quarantine facility in Kinigi, Rwanda, to the Senkwekwe Center in Virunga National Park, Democratic Republic of the Congo. For Maisha and Kaboko, who were captured by poachers in Virunga National Park in 2004 and 2007, it was a homecoming. The two moved into a lush, enclosed forest area where they are semi-free ranging. When Maisha and Kaboko arrived, Ndeze and Ndakasi, 4-year-old females who were orphaned during the 2007 gorilla massacres in Virunga National Park, were living in Senkwekwe's smaller forest enclosure.
The ideal end goal for the orphans is reintroduction to the wild. However, this possibility will only be considered if and when the gorillas learn the skills they need to survive independently in the forest. The mountain gorilla conservation community believes that the gorillas' best chance for success in the wild would be to return as a family. In the past, attempts to return single captive gorillas to established gorilla families have failed.
Since February 19, 2011, MGVP's Gorilla Doctors and the Virunga National Park gorilla caretakers have been working to integrate the 4 orphans into a family unit. MGVP Regional Manager Jan Ramer, a veterinarian and former zookeeper with experience integrating captive primates, took the lead of integration process. For the first few days, Debby Cox, a primate expert from the Jane Goodall Institute, assisted. The man who knows the animals best, Virunga National Park Head Caretaker André Bauma, was also on hand to advise along with several other MGVP and Virunga National Park caretakers.
Integrating gorillas unknown to each other is a delicate and time-intensive process, especially with youngsters not accustomed to submitting to older, dominant animals. Serious injury and mental trauma could easily occur if the process is not carefully managed.
The first day of integration, Ndeze and Ndakasi were carried from their enclosure into the night house where Kaboko and Maisha were waiting. The night house has 4 rooms, two on each side of a center aisle, which are connected via doors and tunnels that can be locked shut in order to separate the gorillas. The two younger gorillas were placed so that they could be across the aisle from Maisha and Kaboko that afternoon and night.
The plan for the first several days was to allow all 4 gorillas to mingle and get to know one another. Unfortunately, Ndakasi was very uncomfortable with the big gorillas and screamed whenever approached. Ndeze was more confident and would run toward Ndakasi as if to protect her whenever she screamed.
On the second day while Ndakasi was hiding in one of the hammocks, Maisha reached for her and Ndakasi fell to ground and lay stunned for several minutes. She recovered quickly with no sign of injury but the introductions were stopped for the day. The following morning Ndeze and Ndakasi were showing signs of stress. Introductions were stopped for a week, allowing the young gorillas time to adjust. It was apparent that Ndeze and Ndakasi, who were both brought into captivity as very young infants and had not been exposed to other gorillas since, needed to learn how to be submissive to older gorillas.
On March 12, Gorilla Doctors Jan Ramer, Eddy Kambale, Jacques Iyanya and MGVP and Virunga National Park caretakers renewed their work. After preparing enrichment items and lining the rooms with banana trees, all the doors and tunnels between the rooms were opened. Ndakasi screamed whenever approached by Kaboko, and Ndeze became excited and hyper-vigilant, challenging Kaboko. Kaboko became slightly aggressive, almost exasperated with Ndeze, and bit her several times, causing superficial wounds.
Things were calmer after Kaboko was separated from the group, however Ndeze and Ndakasi continued to move away from Maisha when she approached. The next morning, it was decided Kaboko would remain separated. Jan Ramer hoped that if the 3 females could form a bond, Maisha could act as protector when Kaboko was introduced. Together, Maisha behaved very appropriately but Ndakasi remained fearful while Ndeze refused to submit to Maisha's authority. However, the interactions were much more calm.
For the next week, the females were kept together during the day and separated at night. As Ndeze and Ndakasi slowly learned their position in the hierarchy, the 3 were eventually allowed to remain together 24 hours a day. Ndeze and Maisha formed a bond, even sleeping and cuddling together. Ndakasi calmed down, but preferred the company of Ndeze over Maisha.
On April 11, Kaboko was allowed in with the females. Maisha took up her role as protector, exactly as everyone had hoped. Ndakasi was appropriately submissive to Kaboko, while Ndeze whined a bit at Kaboko's approach. For the first hour or so, Maisha watched everything, and placed herself between Ndeze and Kaboko when things seemed to escalate. At one point she sat in the door between the 2 rooms while Ndeze and Ndakasi relaxed with Kaboko in the other room.
Sometimes all Maisha had to do was put out her arm or even glance at Kaboko to express her displeasure, and he ceased his pursuit of the girls. Of course, there was a bit of rough and tumble play, especially between Kaboko and Ndakasi, and Kaboko really seemed happy. After the first hour or so, things really calmed, and the group could be found resting quietly, all in the same room. Finally, success! The electric fence for the outdoor enclosure was broken, but as soon as it can be fixed the 4 orphans will be allowed outside together.

Sadly, two new Grauer's gorilla orphans have come into MGVP's care after separate poaching incidents in Congo. On December 27, infant male Kyasa was confiscated from the Walikale area by MGVP partnersDian Fossey Gorilla Fund International (DFGFI) and UGADEC. He was flown to Goma where Gorilla Doctor Eddy Kambale met him and his caregiver. Kyasa was frightened, but at 6 months old, he seemed to be much more trusting of his caregivers than orphans who are confiscated at an older age.
Kyasa was found to be in amazingly good health, although he had some serious wounds on his sides where a leash had been tied. He settled into his temporary home in Goma with two DFGFI caregivers for his quarantine period of 30 days. He passed his quarantine examination with flying colours and was able to fly to the new Grauer's gorilla rehabilitation center, Gorilla Rehabilitation And Conservation Education (GRACE) center in Kashugo, Democratic Republic of the Congo, which is operated by DFGFI and Disney's Animal Kingdom.
In late March we received word that another male Grauer's gorilla was confiscated in Lubutu, Congo, by the Congolese Wildlife Authority (ICCN). Maïko National Park Chief Park Warden Paulin Wilondja-As-Ngobobo has been working on this confiscation and breaking up the poacher network in that area since October.
Gorilla Doctor Eddy Kambale travelled to Lubutu to examine the orphan, who was being looked after by ICCN caregivers. The orphan, named Lubutu, about 2 years old, was extremely malnourished, and suffering from hair loss and mental trauma. After being given milk, water, and fruit Lubutu began to improve. Eddy Kambale flew with the orphan to Goma, where he stayed at a temporary facility on UGADEC office grounds before transferring to GRACE. The Gorilla Doctors performed a thorough examination on Lubutu. Although suffering from a number of ailments, he is expected to make a full recovery. DFGFI Confiscated Gorilla Manager Sandy Jones travelled with Lubutu to GRACE where he will undergo a 30 day quarantine before being introduced to the family of 5 gorillas already living there - Mapendo, Amani, Kighoma, Djingala and Kyasa.