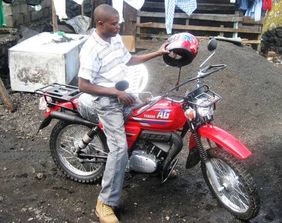 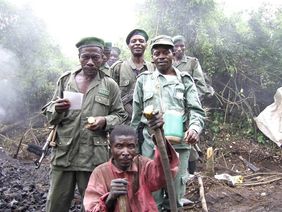 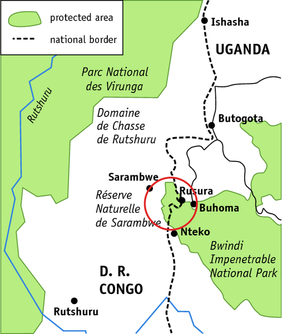 From its establishment in 1952 the Rutshuru Hunting Reserve included the Sarambwe hills until its recognition as the Sarambwe Special Reserve in 1998. From 1952 to 1978 the management of the hunting reserve was entrusted to the Ministry of Agriculture. During this period the reserve encountered grave difficulties which left it in a state of total neglect (Sikubwabo 2009; Mugangu 2001). In 1978 the management was transferred to the ICCN (Institut Congolais pour la Conservation de la Nature - Congolese Institute of Nature Conservation, the national park authority of Congo).

The lack of control of the hunting reserve caused a loss of 60% of its area between 1954 and 1988 (letter PDG, ICCN). The lost area included Sarambwe. From 1970 to 1996, licenses for pit-sawing were granted in and around Sarambwe by the Provincial Division for the Environment.
The discovery of gorillas at the site in 1994 led to rethinking and to increased awareness of the area's need for protection. AJAKAR (Association des Jeunes Amis de Kacheche et Rutshuru), a local association in Kisharu, was the first to disseminate information about the gorillas and raise awareness in the local population.
With funds from Berggorilla & Regenwald Direkthilfe (B&RD) the NGO VONA (Voix de la Nature) organized a workshop on Sarambwe in 1998, with the aim of establishing a road map for the area's conservation. All the local notables, plus representatives of the ICCN and their partners, participated in this workshop. In 1998, Sarambwe was declared a Special Reserve for Gorillas by the Ministry of Environment of the RCD (Congolese Union for Democracy, the main opposition to the former government). Unfortunately, all activities subsequently halted and tree cutting resumed due to the persistent conflicts in the region.
In 2002, B&RD, the Peace Parks Project of the IUCN (International Union for the Conservation of Nature) and the ICCN, initiated a combined action to resume activities. B&RD financed the delimitation of the reserve using Erythrina abyssinica trees, and purchased uniforms for the rangers and rations for the park patrol teams, who also received two bicycles, T-shirts, medical supplies and raingear. The Peace Parks Project will continue to supervise activities and the ICCN will be in charge of protection and management actions.
During this time, certain ambitious persons were trying to persuade the local authorities to transform Sarambwe into a community reserve called RECOGOSA (Sarambwe Gorilla Community Reserve); they had in mind to use funds granted by the Dian Fossey Gorilla Fund International (DFGFI) to promote the creation of community reserves. Due to the failure of the funds to be delivered, and consequent lack of activity, this initiative floundered.
Since the beginning of armed conflict in the region, Sarambwe and the surrounding area have been under the control of Interahamwe (the former Rwandan militia) and the FDLR (Democratic Force for the Liberation of Rwanda). The presence of these military elements again stopped all activity in the reserve, which was without protection for 3 years. Charcoal burning and timber felling occurred again.

Recent Developments
In January 2008, B&RD established a focal point for the region. The first project initiated by B&RD allowed the resumption of activities in the Sarambwe Special Reserve, which had been abandoned for 3 years. The project provided for the purchase of necessary equipment for protection activities and sufficient monthly rations for the patrols. These included 30 pairs of rubber boots, 15 mattresses, 30 plates, 30 cups, a set of 15 pots, tailored uniforms for the guards, and ink cartridges for printers.
The uniforms would identify the rangers, who until then had been dressed in old and disparate clothing and who had hardly had set foot in the reserve for more than 3 years. Furthermore, clothing bought by B&RD was distributed to the rangers of Sarambwe. Patches for uniforms ordered by B&RD arrived at Kisoro and were collected by the B&RD representative.

Effects of the Aid Provided to Sarambwe
The support from B&RD effectively re-established the ranger force at Sarambwe, by contributing to the establishment of routine patrols, integrated and back-up patrols.
The effective protection of the reserve started in April 2008 with an integrated patrol consisting of 11 rangers accompanied by the military forces of the FARDC (army of the Democratic Republic of the Congo) and the local chief of Sarambwe. The main aim of this patrol was to ascertain the state of the reserve and to raise the awareness of the population, the local authorities and the military, about the conservation of the site - and subsequently to ask for their collaboration and help. Before the project started, the reserve's trackers had been persecuted and one had been killed. An individual who claimed to belong to the Mwami family had declared the reserve as his private property and organized timber felling, charcoal burning and hunting. Although it was known that the area was part of the reserve, the abandoned ranger post was used as a base for establishing plantations, and the cutting of timber for construction and fire wood was occurring at a place called Mwiganywa.
On 18 May 2008, following the improvement of security in the area, the rangers set up a tented camp in Sarambwe. This in itself contributed to the dispersal of people posing a threat to the reserve.
During the patrols of May 2008, the rangers discovered fresh footprints of approximately 8 gorillas. They also recorded other mammals: 48 baboons, 25 red river hogs, 17 chimpanzees, red-tailed and blue monkeys. In June 2008, the rangers set up regular surveillance patrols to discourage illegal activities. During these patrols they noted

With the aim of improving the level of conservation and collaboration between different partners, the Sarambwe Reserve sent two teams to Uganda to hold discussions with the authorities of the Bwindi Impenetrable National Park, to inform them of the presence of gorillas and to organize coordinated patrols. This visit had good results for both parties concerned.
On 11 August 2008, the Minister for the Environment, Nature Conservation and Tourism signed a decree (Ministerial Decree number 029/CAB/MIN/ECN-T/JEB/08) reclassifying the Sarambwe Special Reserve and 17 other reserves as faunal sanctuaries. He also transferred their management from ICCN to the Institut de Jardins Zoologiques et Botaniques du Congo (IJZBC). It was planned that the DFGFI and the MGVP would support the functioning of these reserves; no measures have yet been taken, however, for the application of the provisions of the decree.
The ICCN rangers continued to work until October 2008, when the CNDP, a political-military movement launched by Laurent Nkunda, initiated mass military operations. All activities in the reserve were subsequently halted again and the rangers retreated to Rutshuru.
On 11 February 2009, the Minister signed a second decree (094/CAB/MIN/ECN-T/JEB/09), which annulled the first and restored its management function to the ICCN. At present the project is progressing well: the gorillas of the Rushegura family that were habituated in Uganda are currently in Sarambwe and have recently had a newborn.

Conclusion
The support from B&RD has greatly benefitted the Sarambwe Reserve, and has permitted the following:

Perspective
The Sarambwe Reserve has witnessed numerous problems related not only to the presence of militia but also to its conservation status. Initially a part of the Rutshuru Hunting Reserve and, as such, under the management of the Minister for Agriculture, the area was not fully protected and part of the forest exploitation areas were managed by the Provincial Directorate for the Environment. Only after the discovery of gorillas were conservation initiatives developed in the area, and its status evolved from hunting reserve to the Sarambwe Special Reserve. In view of Sarambwe's importance due to the presence of gorillas and their fragile habitats, the Minister for the Environment initially considered classifying Sarambwe as a sanctuary - but rapidly changed his mind.
Any disturbance of the Sarambwe habitats may have an impact on conservation in the Bwindi Impenetrable National Park in Uganda, as these two areas share a common boundary. To be effective, cross-border activities are required, and funds need to be made available for the protection of Sarambwe. The ICCN Provincial Directorate encourages the efforts made by B&RD through its focal point, as well as other partners active at the site such as the IGCP, and hopes that support will continue. B&RD has provided a motorcycle to support the patrols and food rations for patrols, and collaborates in the construction of a ranger post.