The Sarambwe Nature Reserve after the Demarcation of the International Border 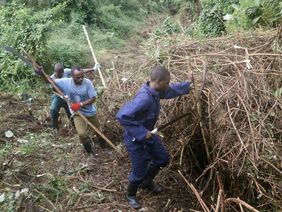 Thorny bushes are removed from the fields in the reserve. (© Mumbere Nzanzu Getride)

In our last article (Gorilla Journal 58) we wrote about our hope that the encroachment of the Sarambwe Nature Reserve (SNR) by Ugandan farmers in search of new fields could be stopped. Today we can announce that this has been achieved. We will also make some recommendations for the future conservation of the Sarambwe Reserve.

The encroachment of Sarambwe Nature Reserve has always been severe. The situation was made worse by confusion over the delimitation of the border between the Democratic Republic of the Congo and Uganda, and by the encouragement or even protection of Ugandan citizens who exploited fields within the reserve that were actually located in the Congo. The reserve was entered for purposes of establishing new fields or cultivating existing ones, harvesting timber by pit-sawing, producing charcoal or hunting for bushmeat. Thanks to the very commendable efforts of senior officials of both countries and the mobilization of teams on the ground, the exact location of the international border has been clarified and demarcated, so that it has been possible to put an end to these violations and about 450 ha were re-integrated into the reserve.

To prepare for the demarcation of the border on the ground, several meetings were held in the DRC and Uganda to determine the joint activities that needed to be carried out in order to sensitize the population and to force abandonment of the illegal fields (after a grace period that was granted for the harvesting of already planted crops). Since that time, we have seen a decline in encroachment and illegal activities to the point of almost complete cessation.

There is a positive trend for the conservation of the SNR. Indeed, before the international border was accurately demarcated, Ugandan farmers, hunters, pit-sawyers and loggers were spotted every month, sometimes under the protection of soldiers. There was little or no Ugandan presence in the reserve in February and March 2018, but this is misleading in that the Ugandan army was present in the exploited area almost continuously during those two months, which meant that trackers and guards could not enter. Consequently, no observations were made. However, despite the two months without observations and the good month of August, 157 Ugandans engaged in various activities were recorded in the reserve in 2018.

Who Are the People Carrying out Illegal Activities in the Reserve?

Can we conclude that the destruction wreaked upon the SNR has been caused by Ugandans alone? The answer is no, although the observations made by rangers and trackers have indicated that much of the illegal activities can be attributed to the Ugandans. Congolese have also been involved in illegal activities in the reserve, albeit in smaller numbers. Rangers and trackers have sometimes encountered Congolese in illegally cleared fields. Having said that, encroachment by Congolese has been minimal, as an information system had been set up to report any incursion into the reserve. In addition, people in the villages surrounding the reserve have been sensitized and motivated by several micro-projects launched by Berggorilla & Regenwald Direkthilfe, the organisation that is taking charge of the trackers, acting alongside the ICCN, which manages the reserve. These community projects include

The Sarambwe Reserve is currently almost free of encroachment and illegal activities. However, the destruction resulting from several decades of encroachment remains evident. This consists of large areas of fallow land, which are degraded and require rehabilitation and increased monitoring to prevent further encroachment that would prevent natural regeneration, a process that will take several years. Continued monitoring and support for guards and trackers should therefore be encouraged and strengthened.

While there was confusion over the border issue, the Ugandans planted thorny hedges in order to protect their fields, blocking access to animals, particularly gorillas. These thorny species are a problem for effective monitoring; in addition, they are mostly exotic species that need to be cut and eradicated from the reserve.

The establishment of new trails in the reclaimed areas in line with the new border demarcation is imperative so that proper monitoring can be carried out. Ideally, in order to improve the monitoring in the entire reserve and because of the insecurity that still prevails, two new ranger posts should be constructed, one in the extreme south of the reserve, far away from the current Sarambwe post, and the other in the extreme north, on Mount Sarambwe.

A working group or CoCoSi (Site Coordination Committee) specific to the Sarambwe Nature Reserve would be desirable as part of an operational plan for the development of the SNR and the surrounding population, as was in place for the period between 1998 and 2001.

Finally, we must not forget the inhabitants of the area around the reserve who continue their support by reporting violations and raising the awareness of the people committing the violations. It is intended to establish new micro-projects to enable them to provide for their own needs.