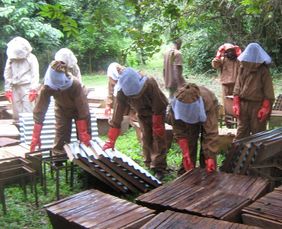 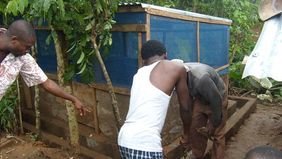 As part of our efforts to improve the protection of the critically endangered Cross River Gorilla in Nigeria, Wildlife Conservation Society (WCS) aims to reduce hunting levels by targeting some of the region's most notorious hunters for training in alternative livelihoods. Hunting was identified as a major threat to the future existence of gorillas in Nigeria as far back as the 1930s. Although today Cross River gorillas are fully protected by law across their entire range, isolated cases of poaching still occur, and the loss of even a few individuals poses a serious threat to the viability of the population given the small numbers surviving in the area.

In the past, gorillas were hunted along with other animals as a source of bushmeat. As their numbers have declined, and as awareness of their protection status has grown the hunting of gorillas has been reduced considerably although the consumption of gorilla meat is still widely believed to confer strength and the gruesome practice of drinking palm wine from gorilla skulls has not entirely disappeared. Despite the presence of more than 60 park rangers hunting of other species continues unabated throughout the Okwangwo Division of Cross River National Park and occasional reports are received from a remote village that a gorilla has been killed, though conclusive evidence to confirm such incidents is often hard to come by.
Hunting is generally a year-round activity but with a peak in the rainy season when it becomes easier to move quietly on the forest floor. Our interaction with hunters in 49 communities around Okwangwo revealed that only a limited number of the bravest hunters, those with the widest knowledge of the surrounding forest, are willing to undertake the risky business of gorilla hunting. Hunters report that gorillas are most commonly hunted at the onset of the dry season during October/November, when gorillas are said to descend to the lowlands in search of water and food bringing them in closer proximity to surrounding villages and enclaves. At other times of the year gorillas are reported to favour the national park's most inhospitable terrain such as the deep valleys and rocky areas of the highest mountains, presumably in an attempt to avoid contact with human activities in the surrounding areas of lowland forest.
In addition to hunting, crop raiding by gorillas and other mammals is currently the source of some conflict between local people and Cross River National Park authorities. Crop raiding also tends to occur during the early dry season and involves crops such as banana and plantain.
By targeting known hunters in and around the Okwangwo Division of Cross River National Park we hope to reduce the threat posed by hunting to the gorilla's long-term survival and also improve the livelihood security of selected hunters. Hunting persists more as a source of income than as a source of protein and is no longer considered either to be a lucrative business or an attractive occupation. Moreover there is always the chance of arrest by national park rangers - and most hunters interviewed expressed their willingness to give up hunting provided that an alternative means of income could be found for them.
28 of the most active hunters were selected from 14 different communities closest to the known gorilla range for the training programme: rearing giant snails, the domestication of bush mango and bee-keeping.

Rearing Giant Snails
Eight hunters were selected from 4 support zone villages and each of them was provided with a modern snail pen constructed from concrete bricks, plastic mosquito netting and aluminium roofing sheets. Each pen was stocked with 225 Giant West African snails (Archachatina marginata). It is expected that during the first 6 months this initial stock will have grown to more than 3,000 snails. Under good conditions giant snails grow rapidly and reach maturity after about one year. Snails are a highly prized delicacy among the local population but have been heavily depleted due to over-utilization. At current prices one snail sells for about 50 naira (about 30 US cents), so 1,000 snails could fetch as much as US$ 300. A ready market exists to supply local hotels and within the village itself where the demand is already high. Snails are an excellent source of protein and the start up costs and investment required are relatively low by using locally available snails and materials. Running costs are kept low because snails eat readily available vegetation such as the leaves of cassava, pawpaw and okra; consumption of household waste is not recommended due to the high salt content.

Domestication of Bush Mango
Bush mango (Irvingia gabonensis) is a local delicacy used in preparing soup, and is in high demand from local traders - it is collected from the wild and grows commonly throughout Okwangwo. The collection of bush mango is one of the major sources of income for forest communities; some studies estimate that the sale of bush mango accounts for as much as 50% of the annual household income. But harvesting the wild fruit from the park is illegal and the proliferation of camps inside the park constructed for the collection of bush mango each year also serves to increase levels of hunting and fishing.
Eight hunters were selected from 6 support zone communities and trained on bush mango domestication techniques, seed selection, nursery management and maintenance. Each hunter was also provided with 50 seedlings of an improved variety of dry season bush mango. Bush mango normally bear fruit only after 12 years but with a special treatment called marcotting the tree can be stimulated to produce fruit after only 3 years. The aim is to encourage domestication of bush mango and other non-timber forest products in order to reduce pressure on the wild stock and to reduce levels of disturbance inside the park. At the same time it was hoped that the livelihood of selected hunters would be improved and they would be discouraged from the hunting of endangered wildlife species as a source of income generation.

Bee Keeping
Honey has high medicinal value and its rate of local consumption is high. Presently honey is harvested from the wild, frequently from the national park. The method used for harvesting wild honey involves the use of fire and frequently results in the destruction of fragile montane habitat. 12 hunters were selected from 9 support zone villages and received training on bee keeping, colony management and honey harvesting. Each hunter was provided with 5 modern Kenyan top-bar bee-hives constructed locally as well as other equipment needed for honey production such as bee-suits, protective hats, rubber gloves, smokers for honey harvesting, iron stands, and honey wax for the baiting of hives to attract bees. Local levels of demand for honey from bakeries, hotels, and pharmacists are high as well as for household consumption. It is hoped that honey could also be marketed for sale to tourists visiting the nearby Obudu Cattle Ranch. Each hive is expected to produce at least 5 litres of honey per season thereby providing each hunter with an annual income of roughly US$ 250.
Whether or not these 28 hunters will be truly transformed as a result of these inputs remains to be seen, and an evaluation of the project is planned after 12 months. In order to have a significant impact on hunting within the park this pilot project, if successful, will need to be expanded to include more hunters and extended to other areas. We believe that the project has the potential to improve much-needed levels of local support for conservation and the park, and at the same time reduce levels of hunting and improve local livelihoods.