Participation in the World Congress of Rangers in Colorado 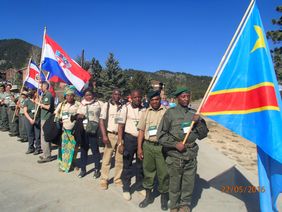 The Congolese delegation at the World Ranger Congress (© ICCN)

The International Ranger Federation (IRF) is an international non-profit organisation that supports ranger groups worldwide who have chosen a challenging pathway to protect ecoystems and protected areas throughout the world. At the global level there is a committee with a seat in Australia presided over by Sean Wilmore and on every continent the association is represented by a committee that meets once a year. In Africa the association, known as the African Ranger Federation (ARF), is based in South Africa. In the Democratic Republic of the Congo (DRC) the association is called the Congolese Ranger Association (CRA); it is led by Jean Pierre Jobogo and has ICCN Directors, Chief Park Wardens and Park Rangers amongst its current and retired members.

The IRF meets once every three years in any country in the world, chosen through consensus. It was in this setting that we took part in the 8th World Congress of Rangers (WRC) in Estates Park, Colorado, USA from 21 to 28 May 2016. The main theme of this congress was 'Connecting the Parks, Rangers and Communities'.

The aim of our involvement in this World Congress was to share and exchange experiences among rangers working in the field linked to the theme and also to look at the specific case of the DRC, where rangers are dying as they carry out their duty of guarding protected areas. The delegation from the DRC comprised Jean Pierre Jobogo (President of the CRA), Director De Dieu Bya’Ombe (CRA Advisor), Chief Conservator Edmond Nkulu Kalala (CRA member), Chief Conservator Boji Dieudonné (CRA member), Mrs Germaine Muzuri (Association Cashier) and member Mrs Ewing Lopongo. Our contribution (Congolese) was to show to the international membership the challenges facing the park rangers of the DRC, and their value in dealing with periods of armed conflict as well as heavily armed poachers who continue to be a serious threat and drain on our natural resources.

The presentations were excellent and tied in well with the theme of the conference and the celebration of the centenary of certain parks in the United States. The rangers unanimously agreed that Nepal should be the location for the 9th World Congress of Rangers in 2019, and also the need for a Green Contingency Force which could intervene wherever there was an obvious need. There was also agreement for the promotion of the President of the CRA to become the Vice-President of the African Ranger Federation and recognition by the IRF of the statutes of the CRA and its logo. The congress acknowledged those who had lost their lives in the course of doing their duty as park rangers and stressed the need for life insurance to help support those they left behind.

We sincerely thank the Jane Goodall Institute (JGI) and Berggorilla & Regenwald Direkthilfe who agreed to fund the cost of our travel and accommodation. We also thank Robert Muir and Karen Laurenson, Directors at FZS, for starting the process of channelling support from Berggorilla within the DRC. We also sincerely thank the promotors of this conference, especially the President of the IRF Sean Wilmore, for promoting the efforts of the CRA and personally encouraging members who have raised the awareness of rangers working in protected areas to the global level.

Finally a big thank you to the Director General of the ICCN and his technical staff who accepted this mission and allowed us to represent the DRC, validated by the ICCN, and also the CRA and Maiko National Park, whom we represented at this International Ranger Conference.