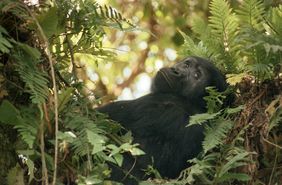 A female of the Chimanuka group in Kahuzi-Biega (© Christian Kaiser)

During the IUCN World Conservation Congress in September 2016, updates in the Red List of Threatened Species were made public. Not surprising was that the Grauer's gorilla - the largest living primate - is now listed as Critically Endangered, the highest category. Four out of six great ape species (both orangutan and both gorilla species) are now Critically Endangered and the remaining two, chimpanzees and bonobos, under considerable threat of extinction.

The eastern gorilla (Gorilla beringei) was moved from Endangered to Critically Endangered due to a devastating population decline of more than 70% in 20 years. Its population is now estimated to be fewer than 5,000. Whereas the numbers of mountain gorillas have been increasing considerably, Grauer's gorilla (G. b. graueri) - the other subspecies of the eastern gorilla - has lost 77% of its population since 1994, declining from 16,900 individuals to just 3,800 in 2015. Hunting represents the greatest threat to Grauer's gorillas.

For more details, check the IUCN Red List and the IUCN's press release