Conservation in Sarambwe Returns to Normal 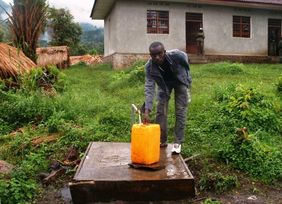 The Sarambwe Reserve is located in the Democratic Republic of the Congo, adjacent to Bwindi Impenetrable National Park in Uganda. Since the arrival of the M23, the reserve has been besieged by armed groups: first the Mai-Mai and then the Nyatura. The latter carried out operations in nearby villages and, after having committed their atrocities, entrenched themselves in the forest or at the forest edge. Several times, the caretakers of the reserve were targeted by these armed men for their weapons and other valuable goods - mattresses, saucepans, clothes, kitchen utensils, backpacks, sleeping bags, raincoats, etc.

After two bloody attacks during which one ranger received serious bullet wounds, the ICCN decided to evacuate the rangers from Sarambwe and to take them to Lulimbi in the central sector of the Virunga National Park. With the reserve abandoned, timber cutting, crop cultivation and grazing of domestic animals started up again.

A project for monitoring activities inside the reserve was then put in place. Its objective is to gather information on illegal activities inside the reserve, to prepare for the resumption of activities when the situation returns to normal (i.e. when peace has been restored) and to allow for patrols of rangers, troops and trackers inside the reserve. Two mixed patrols were in the reserve between October and December 2013. As an outcome of these patrols and the many data collected by the trackers, the ICCN deployed a team of park rangers to reoccupy the Sarambwe Reserve in February 2014. Since then, regular patrolling has taken place. During March alone, 11 patrols were carried out. The patrols reported the following:

Gorillas, guenons, black-and-white co­lobus monkeys and baboons were ob­served and tracks of bush pigs and giant forest hogs were found. The Sarambwe Reserve forms part of the range of 3 gorilla groups: the Kahanga group, which consists of 10 animals, the Mukali group with 8 individuals and the Rushegura group with 18 (see also page 8). The latter regularly travels between the DRC and Uganda; at the time of writing, they were in Uganda.

The achievement of these results after only one month of patrols indicates that conservation activities in the Sarambwe Reserve and in its surrounding areas have mostly returned to normal. In large part this is due to the efforts made by Berggorilla & Regenwald Direkthilfe: the organisation continually searches for ways to make the conservation of the mountain gorillas and their habitat in the DRC possible - even in times of war.