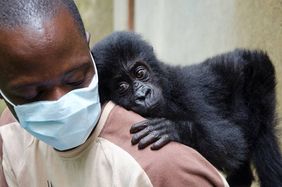 On September 13, 2012, a young gorilla was brought to the Kahuzi-Biega National Park headquarters by a community conservation group, who claimed to have been given the baby by the rebel group Raïa Mutomboki. The baby gorilla was taken from the forest sometime in early August. The Gorilla Doctors Dawn Zimmerman, Eddy Kambale and Martin Kabuyaya, who were in park that day, examined the infant, a 9-month-old female in relatively good condition. She was named Isangi.

On September 20, ICCN and local officials successfully undertook a sting operation following a tip-off by local community members, and confiscated a 4-month-old female Grauer’s gorilla from men attempting to sell her in Goma. Her captors claimed to have taken the baby from the Walikale area. They were arrested and transferred to the court authorities in Goma. The infant was named Baraka. She was weak and dehydrated after 2 weeks in captivity.

Both infants were taken to the Senkwekwe Sanctuary, where they are being cared for by experienced keepers until they eventually will be moved to the GRACE center where orphaned Grauer’s gorillas are cared for.

Although it is good news if gorilla orphans are confiscated and saved in orphanages, it is bad news that they are still captured and traded. There are more sad news: on July 25, 2012, Kaboko – the only male mountain gorilla in captivity – died at the age of 9 years. He lived in the Senkwekwe Sanctuary near Rumangabo, Democratic Republic of the Congo, together with the females Maisha, Ndeze and Ndakasi.