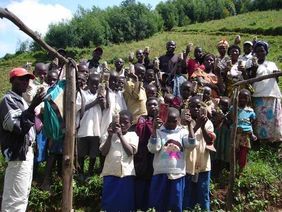 The young trees are handed over to the population. (© Jean de Dieu Paluku Vhosi)

Can they Make a Contribution to Conservation?

Everything developed as a result of lessons learnt from two concurrent projects: the project for the protection of gorilla habitat on Mount Tshiaberimu, and the Sarambwe Reserve Support Project. The former was a micro-project conducted in the vicinity of Mount Tshiaberimu and supported by Berggorilla & Regenwald Direkthilfe (B&RD). Its target group were the members of SAGOT at Buswagha village near Mount Tshiaberimu; the aim of the project was reforestation. The Sarambwe Reserve Support Project was co-financed by the French IUCN committee and B&RD; its objective was to improve the protection of the Sarambwe Reserve by supporting regular patrol activities, establishing monitoring trails, encouraging eco­tourism, demarcating reserve bound­aries, and providing assistance for reforestation and agroforestry in the vicinity of the Reserve.

In both projects, students from the local school were heavily engaged in the tree nurseries and the people made responsible for nurseries at the schools developed a great interest in the activity. The tree nurseries were frequented by

As a consequence, and in response to the requests of the population in the vicinity of Mount Tshiaberimu, B&RD decided to fund a pilot project in schools near Mount Tshiaberimu. Three schools have been selected to participate in the project: the Vurusi Institute, a secondary school, and Tuvuke and Kisanga primary schools. The project will be funded for 6 months a year from 2011 to 2013 and should be able to satisfy the demand. Activities will be funded from September to March, with an implementation report to be submitted in May.

Results after the First Year and Perspectives for the Future

The project proposal planned the production of 24,000 seedlings per year – 8,000 seedlings per school. Sensitization activities were envisaged for the time before the growing seed­lings were distributed and planted. The results for the first year of activities are as follows.

Production: The May report shows a production of 44,000 seedlings compared to the 24,000 that were planned. It also shows that between 22.75 and 27 hectares were reforested, compared to the 12 that were planned – an increase of 190%. Moreover, the seedlings that were grown and subsequently out-planted do not represent the entire output of the tree nurseries. More plants remained in the seedbeds or in the nurseries. The schools have arranged to continue the work in the nurseries even during the period when they are not funded.

The project supervisor, Katembo André, reported again on these activities at the beginning of the new school year in September, and indicated that by that time 52,500 seedlings had been planted on approximately 35 hectares. The project now foresees the planting of 40 hectares every year with no extra funding.

These sensitization messages refer to the threats to the forest and the gorillas, to the importance of the gorillas at the local, national and international level, to the loss of soil due to erosion, and to the decline of agricultural productivity caused by soil loss and by poor cultivation techniques that do not intercrop plants that could restore the fertility of the soil.

It has been very obvious that the school tree nurseries have a much higher productivity of seedlings than a typical tree nursery of the associations: production has reached 52,500 – an increase of 218.75% over the planned 24,000 seedlings.

The nurseries are externally funded for only 6 months each year. The schools have arranged to maintain the nurseries all year round, greatly contributing to the higher productivity.

All seedlings were distributed and planted by the different partners. Several schools near Mount Tshiaberimu, and even from further afield, have now expressed an interest to participate in the project, including Kasimbi, Kitolu, El-Shadai and Ighohya primary schools. The Vurusi Health Centre and the Kisharo Institute at Sarambwe have also expressed interest in developing tree nurseries, as have the secondary schools in Magheria and Masereka.

The tree nurseries have served to teach students nursery techniques. Students from other schools have visited the nurseries in order to learn the techniques, as has happened also in the Sarambwe and SAGOT nurseries.

The school tree nurseries are clearly very effective and profitable. If they are reproduced in other schools, they could make an effective contribution to the preservation of the forest habitats in the Virunga National Park, the maintenance and improvement of local climate, and the conservation of the park’s rare and unique species. They also contribute to the improvement of the population’s socio-economic conditions.

It has been found that one of the most profitable activities locally, a direct result from this scheme, is the trade in charcoal, preventing further deforestation. At Vuswagha village alone, which has approximately 500 people, almost 400 sacks of charcoal at 70 kg each are sold and transported to Kyondo and Butembo city each week. This translates to the cutting of approximately 1,200 trees (3 years old) in a plantation where they are planted with a space of 2.5 m between them, or a loss of 0.75 hectare of village plantation per week (36 hectares per year). Charcoal is sold for about US$ 10 per sack in this village, which means that the overall profits from sale of charcoal are around US$ 208,000 (20,800 sacks of charcoal).

As there is no forest near the villages, people go into the park, the habitat of the gorillas, to cut trees and burn charcoal. It is therefore very important to maintain tree plantations near the villages or among the village fields to keep the population from cutting wood in the park.

In view of the effectiveness of the school tree nurseries, the requests expressed by several other schools and the threat to gorilla habitat in the Virunga National Park, we recommend that the tree nursery project should be extended to the other schools in the Virunga area. The project should cover the whole of the Mount Tshiaberimu area, Sarambwe and the Mikeno sector in the southern part of the park.