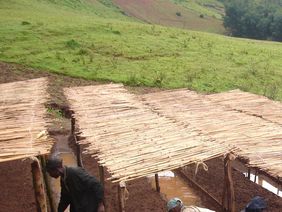 During germination, the seedlings are protected from the sun (© Jean de Dieu Vhosi)

Mount Tshiaberimu is a site that is critical both for conservation and for the development of local communities. It is located in one of the most densely populated areas in Africa in the Virunga National Park. Its biodiversity, high degree of endemism, and typical afro-montane forest - a refuge for a small population of gorillas - are among the conservation assets which have led to Mount Tshiaberimu being incorporated into the Virunga National Park, a World Heritage Site.

The main threats to the gorillas and the forest are identified as: habitat loss due to deforestation, the local population's ignorance of the importance of the gorillas and the forest, overpopulation, soil erosion, poverty, and inadequate funding of the ICCN and The Gorilla Organization (GO) to support community projects. The gorilla habitat is surrounded by settlements with a very high population density of 203 inhabitants per km2. The local people subsist on agriculture and the commercial exploitation of charcoal, which they market in Kyondo and Butembo (approximately 400 sacks of 70 kg each are produced each week by Buswagha village alone). If this exploitation of the timber right next to gorilla habitat is not mitigated by reforestation, it will endanger the survival of the gorillas.
There are ways to counteract this threat, however. GO has expertise in environmental education, an excellent working relationship with ICCN, and very good collaboration with community-based organisations through a community development programme. For over 10 years, GO has been active at Mount Tshiaberimu, providing project support to ICCN. GO works with local communities in its community programme, which it implements in collaboration with local development associations.
These associations have agreed to work together to form an association called "Solidarity of the Friends of the Gorillas of Tshiabirimu" (SAGOT). They have mobilised about 1,300 members to work on the sensitization of the local people to protect the gorillas and their habitat, and to conserve nature in general. SAGOT is supported by GO, in agricultural inputs, small livestock breeding and technical advice. It is represented in the five main villages around Mount Tshiaberimu (Burusi, Ngitse, Kitolu, Kyondo and Buswagha) and coordinated from Kyondo by a GO community representative.

However, in isolation the support provided by GO to local communities is not sufficient to counteract environmental problems effectively and to contribute to the improvement of the socio-economic conditions in which the people live. In order to contribute to the conservation of gorillas and their habitat on Mount Tshiaberimu, the Berggorilla & Regenwald Direkthilfe has decided to finance the activities of a tree nursery which supplies seedlings both for farm forestry and for reforestation. This nursery produces 35,000 seedlings in each planting season - enough to re-plant approximately 20 ha of forest or agricultural land. The direct beneficiaries are 80 members of the Buswagha SAGOT in the village that is located at the entrance to Mount Tshiaberimu, on the road connecting Kyondo and Burusi. The seedlings have been planted in fields belonging to SAGOT members. They serve as tools for the sensitization of beneficiaries and heighten awareness of the importance of preserving the soil and protecting the gorillas. The following species have been planted:

What Else Needs to Be Done?
We believe that the young need to be involved in efforts to conserve the gorillas and their habitat, so as to foster a sense of responsibility where the management of natural resources is concerned.
One good strategy for sensitizing the young people, who will be the future guardians, is the establishment of educational tree nurseries in primary and secondary schools. These school nurseries need to be set up by and for the students, supported by technical staff. Such a project will also contribute to the environmental education programme: the school nurseries will serve as tools to raise young people's awareness of how to manage natural resources and protect the forest. The seedlings produced in the nurseries will be planted by pupils and students, and will help to generate income - or, at the very least, they will help to improve the living conditions of the population resident in the vicinity of the gorillas' habitat. Further, the planted trees will help to mitigate climate change and to restore degraded soil. They will also contribute to the improvement of the relationship between the Park Management and the local communities.