Snares in the Mikeno Sector 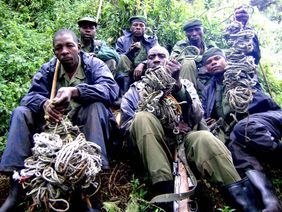 Rangers of the Virunga National Park with snares (© www.gorilla.cd)

Mount Visoke lies at the heart of mountain gorilla habitat - and so naturally the rangers of the Virunga National Park often venture onto the flanks of this mountain for anti-poaching patrols or to rid the area of the snares that threaten the mountain gorillas and other animals. In January 2010 a group of rangers tracked 4 poachers over a 2-day period. They came across traps and signs of poaching, including a dead antelope.

The rangers spent an uneasy night in the forest, and the next day managed to apprehend two of the poachers. Unfortunately, the other two got away. But the two who were arrested, who come from a community not far from the patrol post of Bikenge, were brought to Rumangabo and charged.
Unfortunately these poachers are only 2 of many. This is why we must patrol the Gorilla Sector, and indeed all of the Virunga Volcanoes, to prevent any further destruction of the wildlife.
January 26th, 2010 by Innocent Mburanumwe

Baby Gorilla Caught in a Snare

Snares are one of the major threats to gorillas in the Mikeno Sector. They are laid by poachers who often seek to entrap antelope and other smaller rodents, but often gorillas get caught in them - and can lose a hand as a result, or worse. One of the main jobs of rangers in the forest during the gorilla patrols is to remove the snares that are found.
The juvenile gorilla Nsekanabo in the Kabirizi family was caught in a snare on February 5th. It was released by the rangers Innocent Mburanumwe and Sekibibi Bareke, but the injuries sustained to the face of the gorilla were so bad that Innocent was unable to recognize him. This can happen when gorillas get caught in snares. The animals are injured, separated from their family, and very very frightened. In this particular case Innocent thinks some of the injuries were sustained when the juvenile tried to free himself from the snare, in a panic.
The Gorilla Doctors Magda Braum and Eddy Kambale and the rangers performed an urgent intervention on the juvenile February 7th. They sedated him and his mother Tumaini, and succeeded in removing the rest of the snare from Nsekanabo's left ankle, in addition to sewing up his face that was so badly damaged. But the next afternoon rangers reported that Nsekanabo was dead, but Tumaini was still carrying him around. As soon as she leaves Nsekanabo behind, the rangers will recover the body, and the Gorilla Doctors will be able to perform an autopsy.
February 5th, 7th and 8th, 2010 by Samantha Newport

One thing we have learned in Virunga is that when you have a major setback, you double your effort. Nsekanabo's killing was a catastrophic setback for us.
We worked in Bukima to strengthen the de-snaring effort. Our main problem is that we do not have the manpower to deploy enough patrols in the sector. We have 36 rangers across the sector, and at the moment we can carry out 8 patrols a day, every day. Although these patrols removed several thousand snares from the area in 2009, Nsekanabo's killing has shown that this is not enough to keep the mountain gorillas safe.
So we made the decision to work very closely with the local community to try to resolve this problem. We have established a unit of 40 "Community Scouts" who will help with the de-snaring operations. Instead of a patrol being made up of 4 rangers, a patrol will now be made up of 1 or 2 rangers accompanied by 2 or 3 Community Scouts. Their job will be surveillance and destroying snares. This will double our patrolling effort from 8 to 17 patrols a day. The Community Scouts are unarmed, but the security situation has improved enough to make this feasible. These are all young men from the local community who are known to be supportive and who have volunteered their time to help us in the past. We will pay the scouts US$ 30 a month. We held the meeting with the community leaders yesterday, and we agreed to launch the new approach on March 1st.
Over the next 2 weeks, we will be equipping them with new uniforms and giving them a basic training to work with the rangers. We are also working on a new feature on the "Protect the Park" page of our website, where every patrol is logged by GPS, and registered on the map. That way, you will be able to monitor their efforts. The sponsored areas will continue to be updated, but we are also trying to improve that feature as well.
February 17th, 2010 by Emmanuel de Merode

The 40 Community Scouts from the Human-Gorilla Conflict Resolution Program (HuGo) are hard at work. We pay them US$ 30 per month with donations made via our website (mainly Protect the Park donations). We are already seeing results. Just this week a patrol arrested a poacher near Bukima who had 1 metal snare, and 2 rope snares, intended to catch buffalo. This is the kind of snare that caught Nsekanabo. The HuGos most definitely help us to boost our effectiveness in the Gorilla Sector patrolling every inch. It is absolutely essential to do this if we want to protect the gorillas.May 12th, 2010 by Innocent Mburanumwe From blog entries at the Virunga National Park's website, www.gorilla.cd