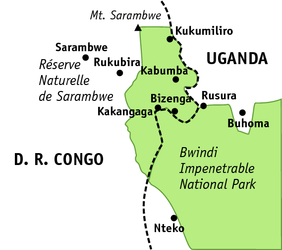 Map of the Sarambwe Reserve with places mentioned in the article (© Angela Meder, adapted from a map by WWF/PeVi)

Five protected areas within the Virunga landscape are of great value, both from a conservation and tourism perspective. These areas are the Virunga National Park and the Sarambwe Reserve in the Democratic Republic of the Congo, the Volcanoes National Park in Rwanda, and the Bwindi Impenetrable National Park and the Mgahinga Gorilla National Park in Uganda. The Volcanoes National Park, the Virunga National Park and the Mgahinga Gorilla National Park adjoin each other, as do the Sarambwe Reserve and the Bwindi Impenetrable National Park (BINP).
Together, these 5 protected areas contain an endemic gorilla subspecies: the mountain gorilla Gorilla beringei beringei. About 70% of the mountain gorilla population is habituated to the presence of humans and most of those groups are used for the purpose of eco-tourism. As the price that the tourists must pay for a one-hour visit to the mountain gorillas is very high, this type of tourism is very selective. Prices vary in the different countries: in the Democratic Republic of the Congo tourists pay US$ 400, while in Rwanda and Uganda the price is US$ 500. There is nonetheless a great demand. In countries where the security situation is stable (i.e. in Rwanda and Uganda), available places are often fully booked in advance, especially during holiday periods.
A maximum of 8 tourists are allowed to visit a gorilla group if it itself consists of more than 8 gorillas. The maximum possible annual revenue generated by one gorilla group in the three different countries is US$ 1,152,000 in the Congo and US$ 1,440,000 in Rwanda and Uganda (360 full capacity visits per year). However, the number of tourists does not always reach maximum capacity. If we assume an average of 75% capacity, the revenue generated by one gorilla group amounts to US$ 864,000 in the Congo and US$ 1,080,000 in Rwanda and Uganda. The potential income is considerable. Efforts must be made for conservation to succeed and to remedy any problems that might arise from tourism.
Before a gorilla group can be visited by tourism, a great effort must be invested in habituating it to the presence of humans. In the Congo, gorilla eco-tourism started up in 1986 and has continued ever since - with interruptions due to various wars and periods of insecurity in the area. Gorillas were discovered in Sarambwe in 1995: the Sarambwe Reserve was recently set up in order to protect the gorillas which range there. As a consequence, the sale of permits for land use was suspended and the management of the area was taken over by the ICCN, who had been working towards the gazetting of the area with the intention of developing tourism.

The History of Gorilla Observations in Sarambwe
Although it is very likely that gorillas ranged into Sarambwe even before 1995, it was in that year that a local organisation called AJAKAR (Association of the Young Friends of Kacheche in Rutshuru) informed the public about the presence of gorillas there. In 1998, AJAKAR announced for the first time that un-named Ugandans had entered the area to drive the Sarambwe gorillas from Congo into Uganda. In 1999, ICCN received a second such report. Observations of gorillas conducted in Sarambwe between 2001 and 2008 indicate that two gorilla groups and one lone animal occur there. The observations of gorillas are listed below in chronological order (according to Sarambwe monitoring reports).
Since 1997, the International Gorilla Conservation Programme (IGCP) has initiated a number of training and capacity building events, including eco-tourism management and monitoring, for the staff from the five protected areas. Almost all the partners have contributed to the provision of field equipment and materials. In order to promote regional collaboration and facilitate conservation, the IGCP has also initiated a joint patrolling programme between staff of different countries. Thus rangers from Bwindi and Sarambwe happened to be on a joint patrol in and around Sarambwe at the time that the Rushegura group returned to the Democratic Republic of the Congo. As a result, no incidents happened. In addition, the IGCP has supported the development of collaboration protocols between the responsible people from the UWA, ORTPN and ICCN. These protocols concern the habituated gorillas which move from one country to another, and may allow for tourists to cross borders to visit them. The protocol also addresses the equal sharing of the revenue generated from tourists' visits.

The Displacement of the Rushegura Group by Ugandans
On 11 March 2009, the entire Ru-she-gura group moved from Bwindi to Sarambwe, where it stayed until 24 July. On that date, an impressive group of Ugandans (including local residents, police officers, army officers and rangers) forcefully drove the gorilla group back into Uganda.
How did this happen and what might be the reason?
On 24 July, a team of Sarambwe rangers went into the reserve to follow the Rushegura group. After having found the gorillas at Kakangaga, the team noted from tracks and other signs that a group of people had just visited the gorillas. Just as they were preparing to return to their base they received a message to meet four Buhoma rangers in Kabumba (we will not name these rangers).
The rangers referred to an invitation by the Sarambwe monitoring team to meet at the border in order to discuss the gorillas' movements scheduled for 26 July. They requested that the -Sarambwe team return quickly to their ranger post as it was absolutely necessary to arrange the meeting for the next day (25 July). After some hours, the Sarambwe rangers heard horns and a lot of other noise originating near the border. They had no idea what was going on.
The next day, the Congolese group who had received the message duly arrived at the meeting point. It consisted of three traditional chiefs and two staff members of Sarambwe. However, no-one was waiting at the meeting point. After several hours of waiting, the Congolese party returned to their homes without knowing why the Ugandans had not turned up.
Subsequently, when the monitoring team went into Sarambwe to locate the gorillas, they were surprised to find the tracks of several people in a broad semi-circle, moving towards Uganda. The signs included foot and shoe prints, and bushes and branches cut by machetes. When the team asked a woman harvesting beans in the area, this woman - of Ugandan descent - informed them that on the day before, just after the Sarambwe rangers had returned to their base, a large group of people arrived with horns and machetes and surrounded the gorilla group. The people made a lot of noise, shouting and sounding their horns, and moved forward in a semi-circle in order to drive the gorillas back into Uganda. After they had crossed the border, the Ugandans made even more noise in order to drive the gorillas further into Uganda.
It is most likely that there are financial motives behind the displacement of the gorilla group. As mentioned previously, Ugandans have crossed the border into Sarambwe in the past and have subsequently driven the gorillas back into Uganda. Once the Rushegura group has entered Congo, visits cannot be organised from Uganda. Enquiries made by independent individuals concerned about the conservation of the gorillas have revealed that these operations are conducted by Ugandans simply because they can no longer benefit from tourism revenues once the gorillas cross the border. The same enquiries have indicated that UWA has attempted to enter into negotiations with Congolese counterparts such that tourists coming from the Ugandan side may still visit the gorillas if they have moved into Sarambwe, with an agreement to split the generated revenue evenly. However, ICCN had not yet reacted to this proposal. The silence of ICCN gives cause for concern about the security of tourists.

What are the Consequences of this Operation?
The immediate result of this operation was the departure of the Rushegura group from Sarambwe to Uganda. Subsequent to the displacement of the gorilla group, two people were charged and injured by the gorillas - they were taken to a medical facility where they were taken care of. Are these two events connected with each other? The UWA rangers have acknowledged that the gorillas were displaced into Uganda but they have denied any involvement, as this would not give credence to the cross-border collaboration that they are supposedly trying to promote.
This was not the first time that the gorillas have been deliberately displaced. However, after raising this issue at several meetings between ICCN and UWA staff, we hope that there will not be a further repetition of the event. Both parties have expressed their concern and will work to sensitize the population concerning the inherent dangers of such actions.