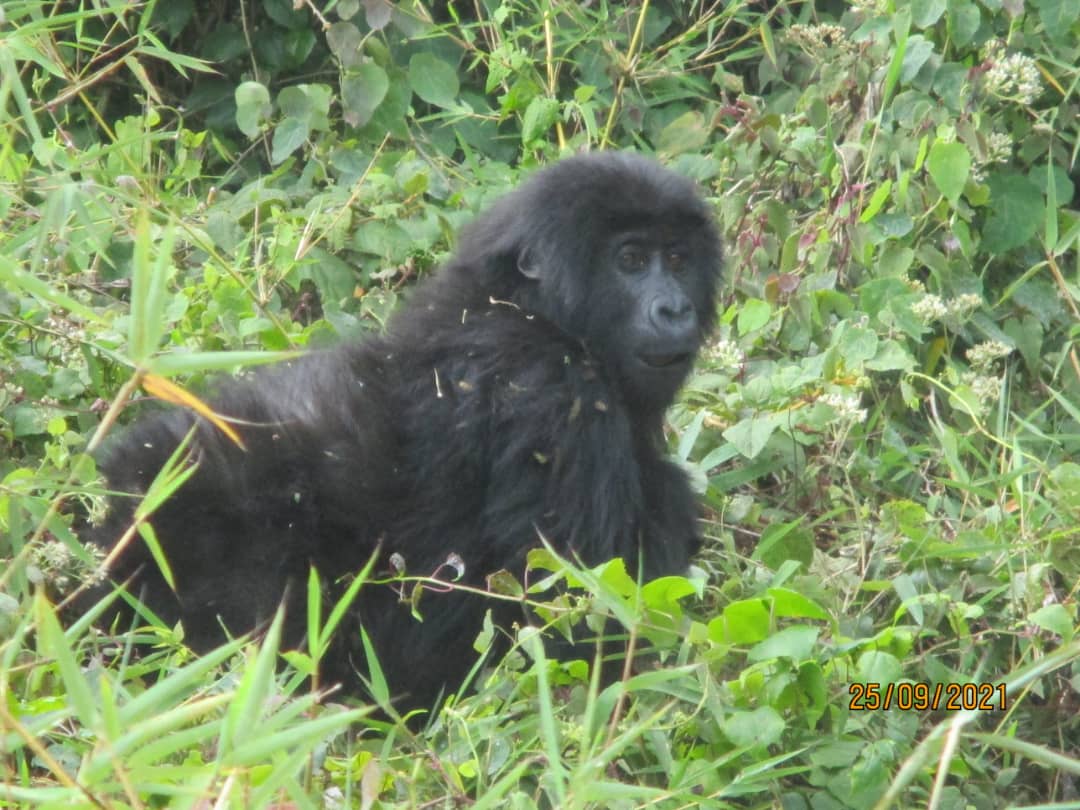 Espoir (Hope), the youngest gorilla on Mt. Tshiaberimu, was born in January 2020 (© ICCN)

A recent paper in the American Journal of Primatology by Andrew Plumptre and colleagues examined the largest survey dataset for Grauer's gorillas Gorilla beringei graueri to date, collected between 2011 and 2019. Grauer's gorilla range covers over 15,000 km² (just under 5,800 square miles, or an area equivalent to half the size of Belgium) in the eastern Democratic Republic of the Congo. The paper has updated our understanding of how many Grauer's gorillas exist in the wild, and the trend in that population size.

In a 2016 paper, the same research group showed that the estimated decline of Grauer's gorillas was more than 80 % over a single generation, putting it squarely into the "Critically Endangered" category of the IUCN Red List. That estimation used the nest count data collected on line transects across the region in the mid-1990s, and compared it to newer information collected between 2011 and 2015. The more recent information was of three types - data on ape nests from line transect surveys, as before; nest data collected on "reconnaissance walks" that linked the transects, and information on gorilla presence collected by rangers (within parks) and local community ecoguards (within community reserves). All these data were georeferenced. As well as the 80 % decline, the 2011-2015 dataset produced a population estimate of about 3,800 Grauer's gorillas (down from 16,900 animals in the mid-1990s, before the civil war in the region).

From 2015 to 2019, further line transect surveys were carried out: almost all of the Kahuzi-Biega National Park (a known Grauer's gorilla stronghold) and all of the recently recognised Oku Community Reserve were covered. The Oku Community Reserve was created because it was also known to be a stronghold for the Grauer's gorilla. The new survey results have provided a more accurate overall population estimate than in 2016, and show that there are almost twice as many Grauer's gorillas than previously believed - the revised estimate is around 6,800 individuals. This reflects the improved spatial coverage of the area of interest achieved during the 2015-2019 surveys that have provided a more representative dataset, leading to a more accurate estimate. For example, in contrast to the earlier 2011-2015 surveys, the Oku Community Reserve with its high density of gorillas was extensively and systematically covered during the 2015-2019 surveys, as were much larger portions of Kahuzi-Biega National Park. In addition, more reliable attribution of great ape nests to Grauer's gorilla rather than to sympatric chimpanzees during the last round of surveys likely played some part in a higher estimated population size. However, it is important to note that this does not represent an increase in the gorilla population since 2015, rather, the previous estimate has been adjusted.

Unfortunately, this study has shown that although the gorilla population in the Oku Community Reserve appears to have remained relatively stable since the mid-1990s, it has declined sharply - by 80 % - in Kahuzi-Biega National Park over the same period. This highlights the importance of the Oku Community Reserve that, together with Kahuzi-Biega National Park, is the last stronghold for Grauer's gorillas and other primates. Current community conservation projects aimed at preserving this stronghold make local communities pivotal in ensuring the long-term survival of gorillas and other wildlife in this region.