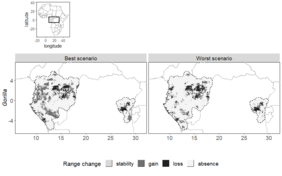 Given a burgeoning human population and rapidly-growing global demand for natural resources, reconciling biodiversity conservation and human-related activities is a fundamental challenge. Tropical forests support at least two-thirds of the world's biodiversity, providing important ecosystem services at both global and local scales. However, a decline of 3 % in global forest cover was reported between 2010 and 2015, with the highest rates of land-use change and degradation found in the tropics, where deforestation rates exceeded five million hectares per year. Africa had an annual rate of net forest loss at 3.9 million hectares between 2010 and 2020, and has up to 400 million hectares of forest that could potentially be used for agricultural expansion. Therefore, continued widespread expansion of agriculture is likely. Moreover, the African continent is the most vulnerable to the effects of climate change, and future droughts, floods and other extreme weather events will lead to the expansion of agriculture into more humid tropical areas. These areas are where great apes live and are generally high in biodiversity.

Great apes (bonobos, chimpanzees, gorillas and orangutans) are flagship species in tropical forest ecosystems, hence, their protection indirectly benefits biodiversity in general, and their conservation importance cannot be overstated. Despite showing behavioural flexibility and adaptation to human-modified habitats, African apes are declining at annual rates of 2 %-7 % due to several anthropogenic threats. This is reflected in their IUCN Red List classification of (Critically) Endangered Species. Drivers including habitat loss, hunting, infectious disease epidemics, large-scale commercial logging and industrial agriculture are directly contributing to their decline, while others, such as human population growth and increased per capita demand, do so indirectly. These drivers have led to a considerable reduction in the suitable environmental conditions for great apes.

While all the aforementioned are important drivers of African ape decline, ongoing climate change is a delocalised, multi-faceted driver, likely to contribute to many of these threats. A recent study revealed that future extreme warming could be dramatic for primates and, despite highly taxon-specific responses, African apes could face regional extinction within their current distribution. However, in general, how future climate change will affect African apes and their habitats remains largely unexplored.

Most African ape populations occur outside protected areas. Even under growing land-use pressure, some legally-protected areas in the tropics have been effective in protecting biodiversity and ecosystems, promoting connectivity, and making a significant contribution to long-term biodiversity conservation. However, many are experiencing biodiversity loss due to the synergistic effects of habitat disruption, hunting, and forest-product exploitation. Importantly, many protected areas will not be exempt from climate change, and consequently inadequate for ensuring the long-term conservation of African apes.

Climate change, land-use change, and human population change are key drivers of global biodiversity decline that are likely to severely impact great apes through range reductions and loss of suitable habitat. Based on an ensemble forecasting approach, a recent study by Carvalho et al. (2021) published in Diversity and Distributions used the most comprehensive database available on ape distribution, the IUCN SSC Ape Populations, Environments and Surveys database (A.P.E.S.), to assess the synergistic effects of climate, land-use, and human population changes on great apes and their habitats by 2050. This included a best- and worst-case scenario for unprotected areas (outside protected areas only, assuming complete management effectiveness of protected areas and consequently complete range stability within protected areas), and for the entire study region.

What Is the Expected Change in Range Size for African Apes by 2050?

Differences in range loss and gain are expected to occur across the African apes' distribution by 2050, but on average under both future scenarios, massive range loss is predicted irrespective of whether only the unprotected portion of the range is considered or the entire range. However, fairly limited range gain is expected if African apes can disperse to new suitable areas, both in areas currently unprotected or across the entire range.

How about the Gorillas' Future Distribution?

We do not describe results regarding range change for mountain and Cross River gorillas given the extreme range loss likely due to their narrow distribution and the coarse resolution of the environmental variables. Grauer's gorillas are predicted to lose three quarters of their range under both future scenarios, with most range loss expected when the entire region is considered. Range gain is likely only inside protected areas under the best-case scenario (i.e., 46 %). According to both future scenarios, more than half the western lowland gorilla's unprotected range is expected to be lost, and most of the species range is likely to disappear if the entire study region is considered. In contrast, substantial range increases in unprotected areas are predicted, with a slight increase if the whole study region is considered.

This is the first study that has combined climate, land-use and human population changes to predict taxon-specific distributions of African apes. Massive habitat decline is expected by 2050, and range gain is uncertain as African apes will not be able to occupy new areas immediately due to their limited dispersal capacity, migration lag and ecological constraints. The 30-year time frame considered in this study is a bit longer than a gorilla generation length and it is unlikely that migration into new areas during this time could occur to any great extent. It is therefore very important that these results are not interpreted as indicating that range gain will occur because effective protection of new suitable areas will first need to be ensured for a great ape population to shift into such habitat. Importantly, massive range loss can be anticipated in the next 30 years given the 2 %-7 % of annual population decline previously estimated for great apes. Thus, our study provides policy makers with compelling arguments for working towards aligning biodiversity conservation both inside and outside protected areas under projected climate change.

For great apes to disperse to new climatically-suitable areas and to prevent irreversible losses across current suitable habitats over the long term, taxon-specific conservation planning should focus on existing and proposed protected areas, the creation and/or management of which can be informed by these habitat suitability models. Thus, for conservation efforts to be effective, it is imperative to: