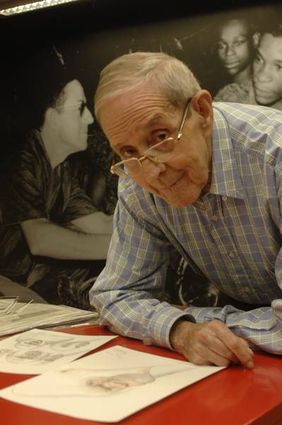 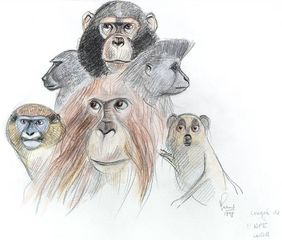 The ethologist Jordi Sabater Pí, Professor Emeritus at the Universitat de Barcelona and one of the internationally best-known Spanish scientists, died at 87 years of age on August 5th, 2009. He spent a very active and profitable life.

In 1940 he arrived in Equatorial Guinea to work as a foreman on a farm. His curiosity about life and animals developed into a great interest in nature and local human cultures. He learned the local language - Fang - and began some zoological and anthropological research projects with the support of his wife who collaborated in some of his tasks to leave him more free time for research. His work led to some extraordinary results, for example his study of the Fang people's art and tattoos, his description of the lyre-tailed honey-guide (Melichneutes robustus), or his study on the metamorphosis of the Goliath frog (Conraua goliath). Tulane University in New Orleans was very interested in his work, and Sabater Pí was hired as a researcher of this university between 1966 and1968 with a grant from the National Geographic Society, the National Institute of Health and the New York Zoological Institute.
Without a doubt it is in the primatological arena where his contributions have been most important. A pioneer in research on African great ape behaviour in the wild, he discovered a chimpanzee (Pan troglodytes troglodytes) population using sticks as tools to catch termites as well as medicines and minerals from the ground in the mountains of Okorobikó in Equatorial Guinea. This discovery was published in Nature in 1969 and it had great implications for ethology, anthropology and archeology; it was the first time that a non-human primate industry was proposed - a proposal that culture existed in another species than humans. Other important works in primatology are his study on gorilla and chimpanzee nesting behaviour and his work on etho-ecological principles in arboreal cercopithecids.
After 1958 he worked for Barcelona Zoo as a curator of the Ikunde Research Center, in Bata, and he discovered the world-famous white gorilla Snowflake, who became a symbol for Barcelona City and Barcelona Zoo.
In 1972 he received a new grant from the National Geographic Society to continue his research in Rwanda, where he studied mountain gorillas with Dian Fossey.
After returning to Barcelona in 1976 he worked as Professor for the Psychology Department, University of Barcelona, where he introduced ethology as a new subject; a few years later, he also introduced primate behaviour.
He always combined working as a professor with research, and he initiated many research projects on animal behaviour, both in captivity and in the wild, producing doctoral theses and international papers. It is worth mentioning his studies on laterality and cognition on great apes and parrots, his research on the etho-ecology of the bonobo on the Democratic Republic of the Congo, and cercopithecid etho-ecology in Bioko, Equatorial Guinea.
He conducted a wealth of profitable research and always disseminated it through talks, seminars and articles for magazines and newspapers to promote ethology and primatology and to bring them closer to the general public.
Sabater Pí was an innovative scientist who was interested in issues before they became popular. His research was always done with the maximum of scientific rigour, and with great stamina; he always kept a global and open vision, paying attention to all the factors that could influence animal behaviour or help him to attain a better understanding of it.
He received many awards for his magnificent scientific career, among them: Premi de la Fundació Catalana per a la Investigació (1991), la Medalla d'Or al Mèrit Científic de l'Ajuntament de Barcelona (1996), and la Medalla Narcís Monturiol al Mèrit Científic y Tecnològic, del Govern de la Generalitat de Cataluña (2004). He was Professor honoris causa of the University Autònoma of Madrid and of the University Autónoma de Barcelona. He was proposed twice for the prize Fundació Kyoto (Japan).
He dedicated all his work to the University of Barcelona in 2000, comprising all his scientific research, note-books, pictures, ethnological objects and more than 2000 drawings and aquarelles painted during his life. These drawings have not only scientific but also artistic value.

The most important memory that we, the people who studied with him and knew him, will retain is his PASSION for studying nature, the wonderful way he transmitted it to all of us, and his great respect for all living beings.
He always said the following: To know something you need to observe it, and if you know it you will not be able to stop loving it, and if you love it you would like to protect it. This sentence defines how he was and how he acted.