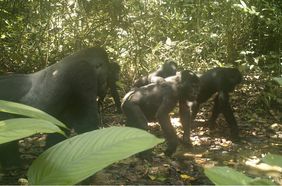 A camera trap placed in the forest caught a group of Grauer’s gorillas. (© DFGFI)

The effective protection of a gorilla population requires a solid knowledge of the demography, ecology and behaviour of their social groups. The density of gorilla groups (number of groups per km²) and the distribution of group size can be measured using the transect method. Exchanges of individuals between social groups can be studied through non-invasive genetic sampling of faecal matter. However, the majority of data required for the knowledge and protection of gorilla populations can only be collected by following identified groups over a period of several months, sometimes several years.

Tracking gorilla groups allows us to collect accurate information on their diet, their preferred forest habitat, the distances the groups cover every day, the size of the groups' home ranges, the degree to which home ranges of neighbouring groups overlap, and the seasonality of diet or the gorillas' movements.

In 2012, the Dian Fossey Gorilla Fund International (DFGFI) set up a research station in the low-altitude sector in the east of the Democratic Republic of the Congo. This station serves the dual purpose of studying and protecting the Grauer’s gorillas (Gorilla beringei graueri). Located in a non-protected forest between the Kahuzi-Biega and the Maïko National Parks, the Nkuba-Biruwe station allows the DFGFI gorilla trackers and researchers to study and protect the gorillas and their habitat over an area of 700 km². Since 2014, the tracking of three gorilla groups ranging south of the study area has been the main project activity. The aim is to collect essential data about the way the gorilla groups utilize their habitat (diet, group movements, seasonal variations) while at the same time protecting them from poaching.

Tracking involves following the gorilla tracks from one nest site to the next by following the traces left behind by the animals - such as trampled vegetation, foot or hand prints, food remains and faeces. Tracking is easier in dense vegetation and when the gorillas travel short distances. Mountain gorillas (Gorilla beringei beringei) and certain populations of Grauer's gorillas live in upland forests characterized by abundant terrestrial vegetation, which makes tracking relatively easy. On the other hand, western lowland gorillas (Gorilla gorilla gorilla) and Grauer’s gorillas living at low altitudes generally occur in forests with little or no undergrowth, with herbaceous vegetation occurring only in patches. The ground is covered by dead leaves, which make gorilla tracks very difficult to spot. Only the most experienced hunters are capable of tracking the animals in such a habitat.

The trackers of Nkuba-Biruwe station all originate from neighbouring villages and they know the forest very well. Several among them are former hunters, now re-directed toward conservation. Even so, the trackers needed several months of practice before they were able to follow a group of gorillas at a distance over several weeks without losing them.

The objective of the DFGFI trackers is to follow a particular gorilla group for several weeks at a time, ensuring that they stay one day behind the group. This means that each day, the trackers start tracking at the nest site the gorillas left the day before and finish tracking at the most recent nest site, which the gorillas had left on the morning of the same day. In this way, the trackers do not encounter the gorillas, so they do not influence their movements and do not cause them any stress. The absence of contact with the gorillas also prevents them from being habituated to the presence of humans. In an area where poaching, mining and armed bands are present in the forest, habituating the gorillas to people would make them more vulnerable. Their fear of humans is their best protection.

When tracking starts in a new area, the trackers first need to locate a gorilla group. The geographical coordinates of several points about 3 km apart are entered into their GPSs. Using their compasses, teams of trackers go to these points and then walk in an approximate circle with a diameter of 800-1000 m around these points. The trackers concentrate on those areas where plants that gorillas eat are located. They look for signs of gorillas that are 1 to 3 days old. This technique allows the trackers to find a fresh track faster than if they searched randomly in the forest. Once a fresh track has been found, it is followed until the most recent nest site has been located.

A tracking team consists of 3-4 trackers and a team leader. Each team member has a defined role. For example, tracker Lumumba is specialized in the detection of signs and the determination of their age. Mokoley can differentiate and interpret the signs of all the animal species in the forest. Jadot, another tracker, knows the names of all the plants eaten by the apes. The team leader stays on the gorilla track with his GPS turned on at all times. He records everything the team discovers in a notebook. Many data are collected in this way. Every 50 m, the GPS automatically records the coordinates. The trackers identify and record all the plant species eaten by the gorillas and collect GPS point data at the feeding sites. The vegetation type characteristic of the feeding site is also recorded. Finally, the nests the trackers find at the end of the day are counted and described.

In spite of the trackers’ expertise, the gorilla trail can be lost. The risk of losing the trail is greater when the group of gorillas being followed is small. Another problem is that sometimes the group splits up into small sub-groups, which move separately, 10 m or more from each other, making their tracks much less visible. In addition, rain during the night might wipe out the tracks left by the gorillas during the previous day. Sometimes, two gorilla groups encounter each other, which makes deciphering the tracks particularly difficult. When the trail has been lost, the trackers return to the last place where the tracks were seen. Then they split up, walking in circles around the tracks at a distance of about 100-200 m. The trackers use walkie-talkies to stay in contact with each other during these searches, which may take an hour or more. These small units have proved to be extremely useful for the coordination of these searches.

Tracking is the foundation of any research activity on gorillas. Well-equipped and well-trained in the use of GPSs and compasses, the trackers can learn in a few months how to follow a group of about 10 gorillas over a long period of time. In this way, the trackers put their traditional knowledge of the forest to good use in the service of research and conservation.