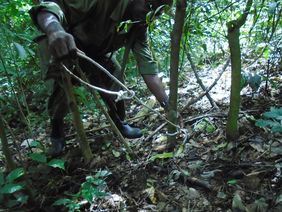 This article documents activities implemented in the Sarambwe Reserve and the almost continuous threats to the conservation of the reserve. It is based on the 11 most recent monthly activity reports, communications by the local authorities, and some older but important reports on the threats facing the reserve. Knowledge of activities underway in the protected area and threats it faces is necessary before solutions can be found. The report will commence with a short summary of activities undertaken and observations on the fauna of the Sarambwe Reserve during the period October 2014 to September 2015.

Maintenance of the Camp and Paths, Border Demarcation, Patrols and Monitoring

The Sarambwe trackers do not only track, as their name suggests, but they also support the reserve with a range of other activities such as the maintenance of the camp and of paths within the reserve, the demarcation of borders between the reserve and the agricultural fields on the Congo side, and foot patrols inside the reserve together with rangers and sometimes soldiers of the Democratic Republic of the Congo who are based at the Sarambwe post.

The trackers participated in a total of 119 patrols, covering the entire reserve. In general, patrols cover the entire length of the reserve each week, and observations are made of the fauna, sometimes also the flora, and illegal activities. Protection activities are carried out where infractions have been noted, but sometimes the rangers and trackers find it difficult to react as they are prevented from doing so by forces that are more powerful than they are: in such cases they can only observe.

Boundary demarcation has been carried out along a length of 2,850 m by planting and maintaining 571 Erythrina abyssinica trees.

An analysis of observations made by rangers and trackers during the reporting period has shown that mountain gorillas were present during 7 months: in December 2014 and in January, March, April, June, July and September 2015. There are 3 family groups and one solitary gorilla that spent more time in the reserve than the other gorillas. The smallest group consists of 4 individuals that are not habituated to the presence of humans, and stays longer in the reserve than the other families. The habituated Mukali group consists of 8 gorillas and comes to the reserve only for short periods of time. The Gahanga group is made up of over 11 individuals (this is based on a count of 11 nests at a site where they slept for one night). The solitary male seems to be more permanent than the two larger groups. Unfortunately, the trackers do not know whether any of the groups is visited by tourists in Bwindi; they gave them names without knowing if they have Ugandan names too. Given the limited training that the trackers have undergone, it is difficult, if not impossible, for them to establish the ages of the gorillas. Therefore, they only record the number of individuals, without specifying their age or gender.

The most frequently observed animal species is the red-tailed monkey (Cercopithecus ascanius), with groups from 4 to 44 animals. From where they are found and from the recorded numbers we can estimate that there are at least 15 groups of red-tailed monkeys; most of these groups number between 12 and 17 individuals. The second most frequently observed species is the baboon. Baboons are everywhere in the reserve, usually moving around in groups from 6 to 38 individuals. Black-and-white colobus (Colobus guereza), also called Guereza colobus, occur in the reserve, usually travelling in groups of between 3 and 24 individuals. Chimpanzees (Pan troglodytes) are also present: the trackers' surveys have yielded groups of 2, 3, 4, 10, 13 and 17 animals. Among other indicator species are bush pigs (Potamochoerus porcus), often encountered as lone individuals or in groups of two and, very rarely, more than two animals - a group of six was reported four times during one year. Squirrels are regularly observed, and so are Gambian pouched rats (Cricetomys gambianus). Duikers are rare and the trackers cannot identify individual species. Some species reported by trackers are doubtful, such as pangolin, jackal and Diademed monkey (Cercopithecus mitis).

Agriculture and its preparatory activities: In the Sarambwe Reserve the greatest threats to the forest and its biodiversity are activities related to agriculture, such as starting bush fires, clearing and cultivation. 'Clearing' means the cutting of vegetation underneath large trees or the cutting of vegetation on fallow land with the objective of preparing a field for cultivation. During the reporting period (between October 2014 and September 2015), the destruction of the forest or recovering fallow land continued as follows:

Due to the involvement of the army in these illicit activities, the rangers and trackers have only been able to destroy 4 ha of fields (2 ha each of manioc and banana trees) - which is only 10.5 % of the planted 38 ha.

Deforestation: Deforestation in this context involves the cutting of large forest trees for various uses, notably pit-sawing, harvesting of log wood, or charcoal production. Recently, charcoal production has no longer been observed in the Sarambwe Reserve, although it used to be practised by the local population. We believe that the reforestation that was initiated through the development of tree nurseries in schools between 2011 and 2013 has yielded enough firewood and charcoal to meet the needs of the local population.

Pit-sawing is practised by Ugandans. This activity is quickly discovered by the Sarambwe trackers and rangers, frequently leading to confrontations between the reserve rangers and the Ugandan soldiers who protect this illicit activity. A wave of arrests of pit-sawyers, some of whom were sent to the office of the public prosecutor in the secondary seat in Rutshuru, resulted in negotiations between the local Ugandan and Congolese authorities at Ishasha in January 2014, during which this activity was halted.

In the course of 2014, however, pit-sawing was observed on three more occasions. In March, the attempt to arrest the pit-sawyers and to arrest the Ugandan planters led to a confrontation - involving an exchange of fire - between the Ugandan troops and the Sarambwe Reserve's rangers in Congo. In May, 4 Ugandan soldiers crossed the border into the reserve near the fields cultivated by the Ugandans in Congo. At the end of August 2015, 5 Ugandans entered the reserve in order to conduct pit-sawing. On being encountered by the rangers and trackers, they fled, abandoning three saws. They alerted their soldiers who crossed into the DRC to recover what they had left behind from their "abductors", whom they "identified" as Rwandan FDLR rebels. The Ugandans led the heavily armed soldiers all the way to the Sarambwe ranger post. A multitude of soldiers overpowered the rangers and took them by force to make them stand trial there. In spite of the intervention of several persons, these ICCN staff members were taken to the army barracks in Mbarara for interrogation, before being taken to Bwindi, where they were released at the border the day after their arrest.

Poaching also goes on in Sarambwe. Wire snares are usually used for large animals (pigs, baboons, gorillas and chimpanzees). Nets made from nylon or lianas are used for small mammals (Gambian pouched rat, squirrels and possibly large terrestrial birds such as partridges). Jaw traps target any animal regardless of size. The trappers may be accompanied by dogs; sometimes a lost dog is found in the reserve.

In the course of this year, 54 traps have been destroyed in the reserve. Of these, 33 were for small mammals, 20 for large mammals, and one was a jaw trap. One dog has been killed. Traps are found all over the reserve and all year round.

Support for Infrastructure and Community Development within and around Sarambwe

Six months after the Sarambwe Reserve became accessible again, Berggorilla & Regenwald Direkthilfe recommenced its support for infrastructure and community development in the vicinity of Sarambwe. These activities mainly target the infrastructure relating to Sarambwe post, particularly provision of field gear, lighting and mini solar panels to charge telephones, a digital camera, a GPS and motorcycles. The rehabilitation of the ranger post has not yet started due to problems relating to the security of construction materials and to the state of the road that leads to the post. The development of community and private reforestation from plants produced in school tree nurseries, and nurseries maintained by the wives of the trackers, has started. These activities had been conducted in 2011 and 2012, but were suspended due to security problems in the area.

A training session in the use of GPS was organised for trackers and mapping data on the reserve are currently being collected.

Baker, J. (2014): Why equitable conservation is a necessity for Bwindi's gorillas. Gorilla Journal 49