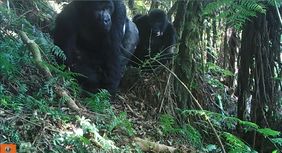 Kahuzi-Biega National Park (KBNP) is home to exceptionally diverse flora and fauna and represents an important site in the Albertine Rift, one of the most biodiverse regions in Africa. The upland sector of KBNP is dominated by montane forest where Grauer's gorillas (Gorilla beringei graueri) and eastern chimpanzees (Pan troglodytes schweinfurthii) range sympatrically. Kahuzi biodiversity faces severe threats due to illegal human activities, following the political instability that occurred in the region in the last two decades and subsequently numbers of large mammals have declined drastically. Apes and elephants suffered greatly from the instability with almost the entire elephant population and half of the gorilla population slaughtered in the montane sector of the park (Yamagiwa 2003). Despite some isolated pockets of insecurity mainly in the lowland sector of Kahuzi-Biega National Park, the situation has much improved on the ground allowing the park management to restart the monitoring, mainly in the upland sector of the park.

In 2017, Primate Expertise (PEx), a Congolese non-governmental organization dedicated to primate research and conservation, started a monitoring program in Kahuzi-Biega National Park using a camera trap technique. Primate Expertise has an operating agreement with the park authority to undertake a systematic biomonitoring program using camera traps. The program is being implemented in collaboration with KBNP. This is the first ever long-term monitoring program using the camera traps to systematically survey elusive animal species sharing the same habitat as the great apes in Kahuzi-Biega National Park.

The program also help to document key behavioural features of unhabituated Kahuzi apes and determine how observed behavioural features in combination with ecological data may help to understand variation existing among the apes' social systems across Africa. Moreover, the camera traps may inform on how snare-induced injuries impact ape behaviour especially on non-habituated individuals difficult to observe in the forest. Even though great apes may not necessarily be the target of bushmeat hunters, many apes are trapped by snares and incur grave injuries that can lead to loss of limb or death.

Camera traps were systematically installed within a 20 km² grid of 1 x 1 km cell laid over the core area of the apes' home range. Within this grid 10 linear line transects of 4 km each were made along which we record information on apes and other wildlife using camera traps.

Mid-term Results of the Program

Data for 10 consecutive months (December 2017 to September 2018) are available. Several hundred hours of photos and video clips of wildlife have been recorded, yet to be analyzed to assess the density and abundance of different animal species sharing the same habitat as the great apes in Kahuzi-Biega National Park. A preliminary analysis revealed about 40 vertebrate animal species that have been identified within the Grauer's gorilla habitat by 24 camera traps in the park.

The ape survey using camera traps is very successful as it informs on some socio-ecology behavioural features of unhabituated apes. The photos show pictures of a wild (not habituated to humans) gorilla family and adult female chimpanzees' party. Three adult female gorillas with unweaned infants led by the silverback and adult female chimpanzees are ranging together with their unweaned and young infants far from adult males, a social feature often observed in other long-term studied chimpanzee populations. Female chimpanzees were observed forming strong and long-lasting social bonds with other females, even in the absence of closely related partners (Lehmann & Boesch 2009). Sex differences in chimpanzee association patterns vary substantially across different sites in Africa (Pepper et al. 1999) and it is interesting to know which model may be ascertained to Kahuzi chimpanzee by observing clips from camera traps.

There is a lack of sufficient information regarding fauna species involved in crop raiding leading to conflicts between the park management and neighbouring farmers. PEx initiated a program to provide documentation on animals crossing the park's edge outside of the forest using camera trap surveys. PEx needs supplementary funds to proceed with this survey. Baboons are so far the animals most often observed in crop raiding events.

Thanks to the brave KBNP rangers and trackers, the activity is ongoing despite the shortage of funds to support monthly field activities. We need food rations for the park's staff working under hard conditions to protect the highly endangered Grauer's gorilla and other wildlife. We desperately need more camera traps to meet the need of the park as this important program has covered only a small area of the highland sector of Kahuzi-Biega National Park. More camera traps are indeed needed to be installed in various areas of the park to assess differences between sites in wildlife richness. We are very thankful to the Japan Monkey Center and Wild Earth Allies for providing a few camera traps, with which we have started this important activity.

Yamagiwa, J. (2003): Bush-meat poaching of larger mammals and the crisis of conservation in the Kahuzi-Biega National Park, Democratic Republic of Congo. Journal of Sustainable Forestry 16, 115-135