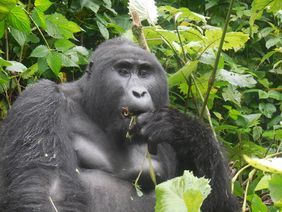 It is with great sadness to inform you about the loss of one of my favorite gorillas in Bwindi, Kanyonyi, the lead silverback of Mubare group. He died on 9 December. Kanyonyi first fell off a tree, but while he was recovering after treatment, a lone silverback fought with him because he wanted to take over his group. Kanyonyi in his weakened state was not able to put up a good fight, and sustained many injuries, which though they were healing, left him weaker than usual. When I last visited Kanyonyi he was eating quite well, but still limping and walking slowly, with one adult female gorilla, Karungyi and her baby keeping close by his side. He made a nest in front of us to take a comfortable morning nap, and we were able to record a brief video. I would like to thank the Uganda Wildlife Authority park staff and CTPH team who have kept a close watch over Kanyonyi to prevent him from having more interactions with the lone silverback until he was strong enough. Fighting amongst free ranging gorillas is considered to be part of their normal behaviour patterns and enables natural group succession. CTPH participated in the post mortem, which confirmed the major cause of his death to be an infection in the hip joint after the fall.

I have known Kanyonyi since he was a baby, when he was born 20 years ago. In 1998, I successfully operated on his older sister, then a juvenile gorilla called Kahara when she had a rectal prolapse. She was named Kahara because she liked to babysit him. Kanyonyi became the lead silverback of Mubare gorilla group in 2012, after his father, Ruhondeza died. Ruhondeza was the lead silverback of the first gorilla group to be habituated for tourism in Bwindi. Kanyonyi was a playful young silverback who liked interacting with human visitors. Over the past five years, he has kept the Mubare gorilla group together and enabled it to grow through attracting many females.

When we started the Gorilla Conservation Coffee social enterprise in 2015 to support farmers living around Bwindi, we decided to name our first coffee blend after Kanyonyi who symbolizes the gorilla conservation efforts at Bwindi Impenetrable National Park since tourism began in 1993. May his legacy continue through stories, memories and the Kanyonyi coffee blend.