The Impact of Neighbours on Bwindi Gorillas' Spacing Patterns 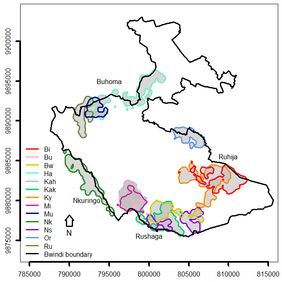 Finding food and mates is vital for all animals, so that they can grow, maintain metabolic functions, and reproduce. The way animals use their environment to find food and mates can be reflected in their spacing patterns or how they use their habitat. Spacing patterns describe how far animals travel on a daily basis or how far they range on a monthly or annual basis or how often they return to certain areas. For group-living species, all these patterns are assumed to be influenced by food availability but also by social factors, such as the size of groups and by neighbouring groups. Understanding how these factors affect animals' spacing patterns is fundamental for understanding the abundance and distribution of animals, carrying capacity, habitat selection as well as for management and conservation.

Animals usually do not wander around aimlessly in the environment but restrict their activities to certain areas. Such areas are referred to as an animal's home range. Home ranges of different groups can be non-overlapping and fixed in their location, which usually allows exclusive access to part or all the home range. Animals with such spacing patterns are called territorial. To maintain exclusivity, territorial animals actively exclude conspecifics from a fixed area. They do so by using active defense, for example wolves will be aggressive towards neighbours, chimpanzees patrol the boundary of their territories, and lions use scent marking as keep-out signals. These behaviours then elicit an avoidance response by conspecifics. In contrast, home ranges of other animals can be overlapping and variable in their location. This usually does not allow exclusive access of areas to particular groups. Animals with such home ranges are referred to as being non-territorial. Non-territorial species, such as elephants or olive baboons, do not actively exclude neighbours from their home ranges but have extensive home range overlaps among neighbours (Brown & Orians 1970; Burt 1946). In territorial animals, spacing patterns are largely determined by competition between groups. However, for non-territorial animals the role of competition with neighbours is expected to play a weak role but remains poorly understood (Adams 2001).

Gorillas are an interesting model to investigate the role of competition between groups. They have been known to show a high degree of home range overlap among neighbouring groups at all sites where they have been studied (Caillaud et al. 2014; Ganas & Robbins 2005). Gorillas mainly feed on herbaceous vegetation, which is highly abundant and it is assumed that they do not defend their food. Therefore, mountain gorillas are characterized as being non-territorial. However, they face high competition between groups for mates. Mating competition is strongly linked to encounters between neighbouring groups, which is the only time that females can transfer between groups. During such encounters, males engage in aggression with extragroup males to prevent their females from transferring to other groups as well as to prevent infanticide of their offspring. Although most encounters between groups are characterized by aggression between males involving displays and chest beating, only a very small proportion involves physical aggression. Additionally, despite extensive home range overlap among groups, encounters between groups are rare; they occur roughly once a month in mountain gorillas (Sicotte 1993; Robbins & Sawyer 2007).

To investigate the role of competition between groups in mountain gorillas in Bwindi Impenetrable National Park, Uganda, we examined the effect of neighbouring groups (density of groups and frequency of encounters between groups) on the groups' spacing patterns by quantifying the daily travel distance, the size of the monthly home range, and revisit frequencies to certain parts of the home range. Additionally, we examined how and when neighbouring gorilla groups use shared areas of overlapping home ranges. To do so, we collected location data on the ranging patterns of 13 groups of habituated mountain gorillas for approximately 1 1/2 years. To get simultaneous ranging data on all habituated groups, 11 trained local research and field assistants helped us collect these data. We were able to work with groups ranging in all four general areas of Bwindi: Buhoma, Ruhija, Rushaga and Nkuringo.

Our analysis revealed that neighbouring gorilla groups experienced competition between groups. The higher the density of gorillas near a group, the smaller the area used per month by a group and the less a group returned to certain areas. Furthermore, groups increased the distance travelled on days that two groups had an encounter. Despite high home range overlap among neighbouring groups, core areas, i.e. areas of intense utilization within their home range, were largely mutually exclusive. Lastly, we showed that groups reduced using areas previously used by their neighbours. All of these results suggest that groups aim to avoid one another.

In conclusion, our results provide some of the first evidence of competition between groups in mountain gorillas. We clearly demonstrated that even in non-territorial species, such as mountain gorillas, neighbours are fundamental in influencing spacing patterns and groups appear to be constrained in their movements by neighbours. Our study is the first to show that despite having overlapping home ranges, gorilla groups have largely mutually exclusive high-quality core areas. This suggests that neighbouring groups actively avoid each other, although gorillas do not defend their home range. This leads to the question of how do gorillas avoid neighbours and maintain these largely mutually exclusive core areas without defending their home range.

There are three likely possibilities of how their behaviour could lead to such a pattern. First, we suggest that gorillas remember the locations of encounters between groups and subsequently avoid these areas. Second, gorillas may use chest beats to locate and then avoid neighbours. Third, they may use signs of foraging, such as trampled vegetation, feces, and food remains, to avoid areas previously used by neighbouring groups. Such a spacing pattern to avoid competition with neighbours may have consequences important for the conservation of this critically endangered species. Having exclusive core areas reduces the amount of available space for each group and thus lowers the carrying capacity of Bwindi despite abundant food resources. Our results highlight that there might be no clear distinction between animals being territorial or non-territorial because animals, such as Bwindi mountain gorillas, can combine some aspects of territorial with non-territorial behaviour.

We gratefully acknowledge the Uganda Wildlife Authority, the Ugandan National Council of Science and Technology, the Institute of Tropical Forest Conservation, the Berggorilla und Regenwald Direkthilfe e. V., Deutscher Akademischer Austauschdienst, the Max Planck Society, and a special thanks to all the hard working and dedicated research assistants and Bwindi park staff. We also thank Roger Mundry and Christophe Boesch for their assistance with this research.