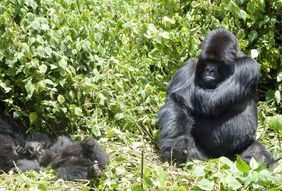 The number of mountain gorillas on the Virunga Volcanoes has increased continuously for four decades now, as was shown during the last censuses. The size of their habitat, however, did not increase during that time, so the gorilla density increased too. This means that the gorillas' competition for resources may also have increased. Damien Caillaud and his colleagues wanted to find out which effects gorilla density had - especially on their social behaviour and whether this affected the growth of this population between 2000 and 2017. They found that behavioural factors had a considerably larger effect on the population growth rate than ecological factors.

In 2007, the group density suddenly increased in a gorilla subpopulation in the Volcanoes National Park in Rwanda; compared to 2006, the social unit (groups and solitary males) density was two to three times higher in 2007 to 2017. This had a marked effect on gorilla behaviour and demography: it led to a threefold increase in the rate of violent encounters between social units.

During such encounters, females often transfer to other units, so the rate of female transfers per year increased too - it was a tenfold increase between the periods 2000-2006 and 2007-2017. When a mother of an infant transfers to another mountain gorilla social unit, her infant is frequently killed by the new silverback. Therefore, the increase in female transfers led to an increase in male aggression toward infants. The infanticide rate per infant per year increased 4.5-fold between 2000-2006 and 2007-2017. This infanticide increase was responsible for a decrease in the subpopulation's annual growth rate that dropped from an estimated 5.05 % in 2000 to 2.37 % in 2017. Infanticide is responsible for more than half of the decrease in the growth rate.

During aggressive encounters, more males were wounded fatally during the period 2007-2017 than during the period 2000-2006: seven males compared to one died. Other factors that may contribute to the reduction in the growth rate are for example stress and disease - stress because of the higher number of aggressive encounters and more disease transmissions because of more contacts with other units.