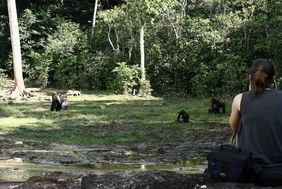 Western lowland gorilla tourism exists on a considerably smaller scale than that of the high profile mountain gorillas. Yet the successful habituation of several western lowland gorilla groups, combined with demand from international tourists and revenue expectations from local governments, have resulted in the expansion of western gorilla tourist programs and increasing research presence. A major concern of ape tourism is the heightened risk of human-ape disease transmission, which can have severe consequences for habituated ape populations. Chronic stressors may act to lower ape immunity and thus increase their susceptibility to disease. Guidelines have been designated to diminish these risks, such as a minimum observer-gorilla distance of 7 m. However, this distance limit is based mainly on mountain gorilla disease transmission risks and takes little account of the potential psychological impact of close human presence.
The Bai Hokou study site, located in the Dzanga-Sangha Protected Areas Complex of the Central African Republic, was selected in 1997 to develop a long-term gorilla habituation project for ecotourism and research. One of Bai Hokou's tenets is to monitor human impact when following western lowland gorillas, identify potential negative triggers, and through this process learn how to best minimize the disturbance caused by human observers following habituated or semi-habituated groups. This study forms the second stage of a longer-term project designed to evaluate human impact on one particular western gorilla group at different stages of the habituation process.
The preliminary study was conducted in 2006 on the same gorilla group at an earlier point in the habituation process, with results reported in issue 38 of the Gorilla Journal. It found that the presence of tourists and film crews were linked to a decrease in silverback resting behaviour and an increase in group aggressive behaviours. Here, we evaluate the impact of human group type (trackers, researchers, and tourists), size and observer-distance on the behaviour of the same western lowland gorilla group in the later stages of the habituation process. We also discuss whether the current 7 m distance limit is sufficient (particularly for western lowland gorilla groups who share a different social structure from mountain gorillas), considering the potential behavioural impact of close human presence.
Data were recorded over 12 months from January 2007 on the Makumba group, which consisted of 1 silverback (Makumba), 3 adult females (Bombe, Malui, Mopambe), and 8 immatures of varying age-sex classes. Final analyses were conducted over 258 sessions (morning or afternoon), on 1,885 silverback scans, with tourists present in 320 of these; 135 tourists visited the gorillas during the recording sessions. A maximum of 3 tourists were allowed in each 1-hour gorilla visit, and total group numbers (researchers, trackers and tourists) were not to exceed a 7 person maximum.
Our results show that observers spent more time within 6-10 m of the silverback when tourists were present. In addition, even though almost half of total observation time was spent within 6-10 m of the silverback, there were distinct decreases in human-directed silverback aggression at 10 m, with a plateau effect at 18 m. While aggression was almost entirely eliminated at 18 m, it is very unrealistic to expect quality viewing at this distance when the gorillas are on the ground. Again, given the dense habitats in which western gorillas live, quality viewing at 10 m is not always possible, although in more open habitats viewing can easily be achieved when standing more than 10 m away from the focal gorilla. In denser sectors, approaches to 7 m may be necessary.
Almost one quarter of total aggressive events and over one third of all silverback aggression recorded was human-directed. It is important to note however, that 65% of silverback and 47% of group human-directed aggression were in the form of soft barks, which represent only low level aggression. This does not mean that they should be ignored, for they are warning signals that, if disregarded, can escalate into high level aggression and as such should be considered an important indicator of human-gorilla tension. The presence of tourists did not affect rates of aggression toward humans for any of the gorilla age-sex classes, nor did the number of people present in either research team or tourist group. However, one female in particular - Bombe - exhibited higher aggression rates as research team size increased. In fact, Bombe expressed more human-directed aggression than any other gorilla in the group, including the silverback. We suggest that habituation, or lack thereof, was not the sole cause of her heightened human-directed aggression, and that personality also played an important role. Finally, results show that, as research team numbers increased, group feeding decreased while mixed behaviours increased. In addition, as human-silverback distance decreased, Makumba fed less and monitored humans more.
These data suggest that research teams may have a more pronounced effect on the behaviour of the Makumba group than do tourist groups. Although this difference may partly be due to lower tourist pressure at this site, management of research and tracker numbers needs stricter consideration. It is also important to note that the factors analysed in this research explained a maximum of 10% of the variance in the data. Biologically, there are many other non-human factors affecting the gorillas' behaviour. Human-gorilla distance, however, explains much more of the variance in the data than does human group type or size, further suggesting a need to re-examine the current distance rule of 7 m to incorporate the potential psychological stressors of close human presence.

Due to the remoteness of western gorilla sites, tourists often arrive in large groups with strict timelines, which can make recommendation 5 challenging. However, tourist pressure is increasing; thus with careful consideration of logistics before problems arise, matched with an increase in the value/cost of gorilla visits, the one visit per day guideline can be feasible. Our results indicate that western lowland gorillas may require a different set of guidelines from those already in place at mountain gorilla tourist/research sites.
Even if we were to disregard the psychological stressors of large human groups observing the apes at close distances, the dense sectors of western gorilla habitat mean that researchers/tourists will struggle to obtain satisfactory viewing when there are more than 3 tourists or 6 total observers present.
Our goal, above all, is to provide feasible recommendations and we hope that the implementation of these suggestions will not only benefit the gorillas in question but also the people, who have spent valuable time and effort to visit/study the group. Finally, Bombe's reactions illustrate that sometimes, even when applying strict guidelines, humans may still receive aggression from those who remain intolerant of their presence. In these circumstances, specifically pertaining to tourist safety, avoidance of those individuals may be an alternative strategy.
Ecotourism when conducted properly can conserve the environment and sustain the well being of local people. Although there are many factors that currently limit tourist numbers at western lowland sites (i.e. poor infrastructure, political instability, etc.), these programs can still benefit the gorillas, their habitat and the local human communities. Over 40 Ba'Aka trackers and 6 local assistants are employed at Bai Hokou, as are a large proportion of the local population who work for project headquarters in Bayanga (i.e. guards, etc.). Furthermore, although unquantified, there is considerable evidence that the presence of researchers and tourists in a gorilla range can act as a significant deterrent to poachers, as well as allow anti-poaching units to be alerted if illegal activities are detected.
The purpose of this article, however, is not to evaluate the success or value of gorilla tourism, but only to explore a specific facet - that of the impact human observers have on gorilla behaviour. By continuing to identify the potential negative triggers of close human presence to habituated and semi-habituated groups, we can learn how best to minimize our level of disturbance. This article forms part of a special edition on "Ethnoprimatology" - the consideration of human attitudes and behaviour on all aspects of primate lives and survival - that will be released in print by the American Journal of Primatology at the end of 2010.

We are greatly indebted to the Makumba Group, Bai Hokou, the Dzanga-Sangha Project staff, trackers and volunteers for all their support throughout the study, which was made possible through the Central African Government and the World Wildlife Fund for Nature. A very special thanks goes to Angelique Todd, Bai Hokou Primate Habituation Advisor, whose constant support and encouragement has been vital to the completion of this project, as well as Leanne Van der Weyde who helped collect data in the final 4 months of the study. Acknowledgement of funding is owing to the Toronto Zoo, University of Stirling, the Natural Environment Research Council, and the Economic and Social Research Council.